He and Grant Iamhara both have problems with runaways
Enlarge 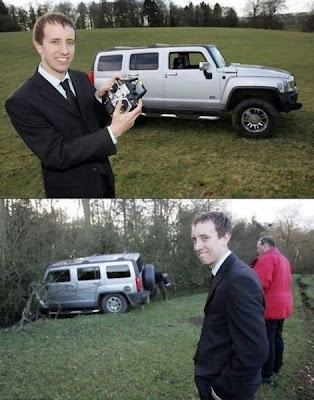 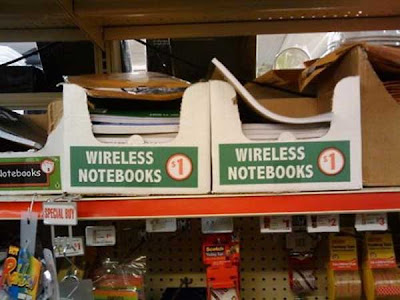 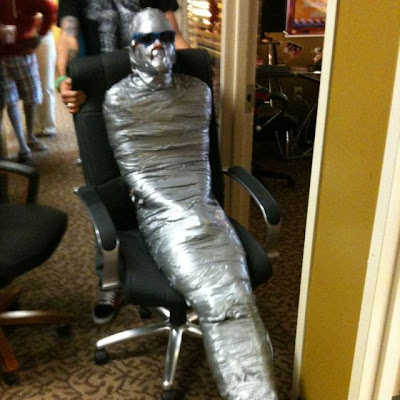 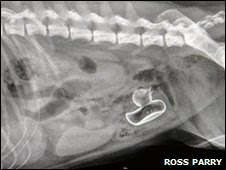 A dog has had a £1,000 operation to remove a rubber duck from its gut - 18 months after the bathroom toy vanished.
The owners of Spike the Patterdale terrier were astonished when they took their sick pet to the vet and discovered what had caused the problem.
Colin Smith, 52, of Thorner, near Leeds, said: "I was absolutely amazed.
"When we saw it after the operation it was the same duck he swallowed 18 months ago. We assumed he'd chewed it up and it had passed through him."
Mr. Smith said he and his wife Lorraine Fenton were relieved to discover what was making their dog so ill, despite the £1,060 cost of the operation.
"It was just a relief to know there was something there causing the problem because we were quite worried about him," he said.
The couple became concerned when six-year-old Spike began vomiting just before Christmas.
They took him to a vet in nearby Wetherby but initial tests failed to reveal the cause of the problem.
It was only after an X-ray that the truth emerged in the shape of a perfect outline of a rubber duck clearly visible in the dog's small intestine.
Mr. Smith then recalled how Spike had taken the toy from the bathroom in the summer of 2008.
"He eats absolutely anything," said Mr. Smith.
"He must have seen the duck and thought 'they're not going to let me have this' so he just swallowed it whole."
"The only difference is it has gone black after losing its yellow paint," he said.
Spike's owners said they would be keeping the duck as a memento.
.
Posted by The Man at 2/02/2010 1 comment: 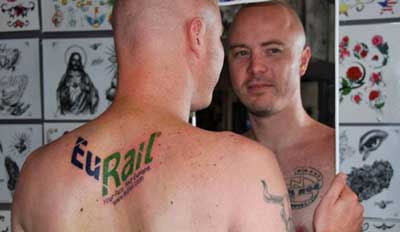 An Australian man said he obtained a pair of passes for his parents to ride a train across Europe by tattooing the transport company's logo on his back.
Grant Burton of Melbourne said he wanted to give his parents a trip to Germany for their 40th wedding anniversary so he contacted European rail company Eurail with his tattoo-for-tickets plan, Britain's The Sun reported.
Burton said the company agreed to the exchange if he could attract 5,000 people to a Facebook group outlining the plan. He said the Internet portion was easy, and he now sports the Eurail logo across his back.
"I'm giving something back," Burton said of his gift to his parents. "They've done so much for me. Being a human billboard is a small price to pay."
.
Posted by The Man at 2/02/2010 1 comment:

Man’s Toyota truck strikes Toyota dealership
A man who attempted to return his recalled Toyota pickup truck to All Star Toyota crashed into the dealership building when his faulty accelerator stuck, the Baton Rouge Police Department reported.
Mikel Valviva sought to return his truck to the dealership, saying he no longer wanted it because of the recall on the accelerator, Lee said.
Matt McKay, owner of the All Star Automotive Group, said Costanza explained to Valviva on three separate occasions on Saturday that the dealership could not refund his money for the truck.
McKay said the process during the recall requires dealerships to provide a loaner car while the recalled vehicle is repaired.
Valviva refused the offers and tried to leave the dealership, but his gas pedal stuck, Lee said. The truck accelerated forward, striking the building, Lee said.
.
What a dirty rat!
Police in the Swedish capital said they arrested a man who allegedly pushed 19 mice through the mail slot of his musophobic ex-wife.
Stockholm police spokesman Lars Lisberger said the 37-year-old woman woke up at about 7:30 a.m. Sunday and discovered her apartment was full of mice -- an animal she had a special fear of.
The woman's 59-year-old ex-husband was brought in for questioning and admitted to dumping the mice into the mail slot of the apartment, Lisberger said. He was placed under arrest.
The mice were captured and brought to the police station for examination by a veterinarian.
Lisberger said the man has demanded the mice be returned to him.
"He has treated both the mice and his ex-wife badly, so I do not think that he should be given any of them. But we shall have to wait and see what the authorities decide," the spokesman said.
.
Stolen Police S.U.V. found at La Guardia Airport
A police officer with the Port Authority of New York and New Jersey who spotted a city police sport-utility vehicle oddly parked at La Guardia Airport on Saturday discovered that it had been stolen that morning in the Bronx, the authorities said.
The S.U.V., a Chevrolet Tahoe, which was attached to the Police Department’s Highway Unit, was parked by an officer at 7:33 a.m. near Pelham Parkway South and Cruger Avenue in the Bronxdale neighborhood, the police said.
As the officer, Nelson Robles, left the vehicle idling and unattended to enter a store, a man jumped inside and drove off, the police said.
Officer Robles, a 15-year veteran, had gone into the store “for personal reasons,” an official said, without elaborating.
Later, after the officer was interviewed by supervisors, he was suspended without pay and stripped of his gun and badge, the police said.
.
Scholar gets $4.4 million to study free will
Most of us take free will for granted.
What if we didn't really have free will?
.
Spanish disco offers gals free VIBRATORS
.
Ice Rink Offering Zamboni Lessons - VIDEO
.
Man’s best friend shoots man in back during hunting trip
.
Unclaimed Bodies Rest Outside Of Morgue
67 Giant Freezers Store Record High Number Of Unclaimed Bodies
.
A happy dog... they wag it to the left
.
Cartwheels in underwear leave schoolgirl with frostbite
.
Man says police destroyed mystical powers
.
Posted by The Man at 2/02/2010 1 comment: