I was close to having it 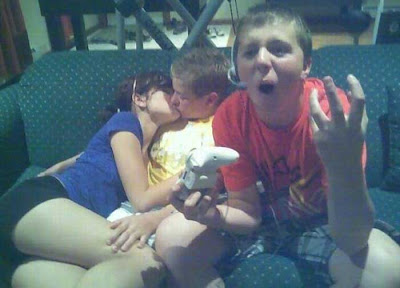 Police in South Jersey are searching for a man who randomly attacked a shopper earlier this week at an Acme supermarket in Millville, NJ. The brutal attack was caught on store surveillance tape.
The victim's wife, Leslie Ritchie, describes the attack:
"He just came up from behind him, and it was like WWE (a wrestling organization). He picked him up and flipped him over, and his feet were in the air. He landed head first and then down on his back."
Bill Ritchie is recovering at Cooper University Hospital with numerous injuries, including a cracked skull, cracked vertebra and a ruptured spleen:
"I'm upset that I'm going to be out of work for three months 'cause some guy grabbed me and threw me. I'm sick over it."
Police say that after the assault, which took place last Sunday, the suspect finished his shopping, paid for his pre-cooked ham and then calmly walked out of the store.
.
.
Posted by The Man at 1/31/2010 No comments:

Labels: In The News, SUCKS, Video's

Why did the chicken cross the road?

To play chicken with drivers on busy road
The well-fed black hen has taken up residence behind the electronic billboard at Glendale Community College for at least two months.
The chicken has dodged animal control officers several times by attempting risky flight maneuvers into traffic at Verdugo Road and Mountain Street.
The brazen bird was walking into the intersection, forcing cars to swerve around it.
Startled by traffic, the chicken quickly turned around and went back to the sidewalk.
Ricky Whitman, spokeswoman for the Pasadena Humane Society, says the chicken is creating dangerous traffic conditions for drivers.
Animal control officials say without the extra food, the bird would become weak enough for them to catch it.
They say tranquilizers are out of the question because the chicken is too small.
.
Why did the chicken cross the road?
Chicken Crosses Road To Die on Live TV
.
Posted by The Man at 1/31/2010 No comments:

It's the slow time of year for the construction business in Mankato, Minnesota, but when your public relations representative is a Golden Retriever named Hayley; jobs for DeMars Construction in Mankato seem to come a little easier.
Hayley is able to climb up a ladder as well as any other on the team. "She's one of the guys, part of the crew," said owner Max DeMars. And like the crew, Hayley too can handle a two-by-four.
Since she was a pup, Hayley, now 10 years old, follows the crew wherever they go.
After hundreds of jobs over the years, she's got a pretty good handle on climbing up the ladder, even when nobody else is up on the roof.
One cold January day her solo trip nearly got her in some hot water.
The crew was working on an addition for the Hosanna Lutheran Church in Mankato when a neighbor spotted her on top of the building.
The neighbor called police and a short time later an officer arrived.
"The police officer came up and wanted to take her to the pound 'cause he thought it was just a stray dog," laughed DeMars.
It took a bit of convincing, but Hayley showed the officer her trick and she was off the hook.
The construction dog has been back at it ever since, as she will likely help secure another gig with the kind of rooftop advertising she helped to bring this time around.
.

Family evacuated due to naked man on roof
A Santa Ana, Calif., family was evacuated from their home after a naked man with a tattoo on his face was spotted on their roof, police said.
A man, his wife and a child were evacuated from their home Wednesday afternoon after freeway drivers contacted authorities regarding a naked man allegedly performing a sex act on a rooftop.
Police say they found Charles Edward Meaux Jr., hiding in a closet inside the home. Officers say they used a stun gun in their effort to restrain the suspect, the report said.
.
Grandma accused of drugging 1-year-old grandchild
A Jefferson City, Missouri woman is accused of drugging her 1-year-old granddaughter, hoping that the child's divorcing parents would get back together if they had a sick child.
Jefferson City police allege in a probable cause statement that 41-year-old Terri Chilton fed her granddaughter blood thinner on Jan. 12, causing the girl to bleed uncontrollably from her mouth, nose and two minor scratches. The girl survived, but it's not yet known if there was long-term organ damage.
.
Copper wire vandal saws power pole down
A vandal used a handsaw to cut down a power pole near Crockett, apparently in hopes of stealing copper wiring, authorities said today.
The vandalism was discovered about 12:15 a.m. when Pacific Gas and Electric Co. crews, the California Highway Patrol and East Bay Regional Park District police officers responded to reports of the downed pole on San Pablo Avenue at Cummings Skyway.
The pole had been sawed and wires were all over the road, said PG&E spokesman Blair Jones.
In October, a man suffered serious burns when he shimmied up a pole and tried to cut copper wires in the same area, and another man was hurt about a year and a half ago in Port Costa, Jones said."Anyone who engages in this kind of activity should understand the consequences," Jones said. "Not only is it illegal, it can also cause serious injuries and/or death.
.
Homeless donate $14.64 for Haiti quake victims
.
Man buys car, finds $200K hidden behind the back seat of the car
.
Child rapist killed by inmate with a shoe lace
.
No excuse pads help Ghana girls go to school
.
Preteen's Pregnancy Noticed by Teacher
.
Swim Coach Gets 40 Years in Prison for Molestation
.
Teacher jailed for having sex with pupil
.
Defendant stuns court by asking if he could pull a check out of his butt
.
Former employee cleared of stealing nearly £1million from a bank
.
Body of $31m lottery winner found buried
.
Inflatable Gorilla Cause of Building Fire
.
Cleanup in Bakery Aisle
.
Actor Elmore “Rip Torn” Arrested for Breaking Into Bank
.
Posted by The Man at 1/31/2010 No comments: