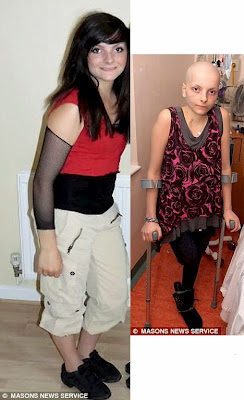 A teenage cheerleader had to have her leg amputated after doctors missed her cancer four times - telling her it was 'growing pains'.
Shannon Corr, 15, repeatedly visited GPs for over a two-month period complaining of agonizing pains in her right knee and shin that left her struggling to walk.
But doctors told her she was suffering from growing pains and told her to go home and rest.
After GPs refused to refer Shannon to hospital, her desperate mother Jeannetta Swift, 44, took her to A&E and pretended she had fallen over so she could be fully examined.
Doctors immediately spotted a problem, but by the time the rare bone cancer osteosarcoma was diagnosed it had spread to the soft tissue of Shannon's leg and surgeons were forced to amputate.
.

On the run, the lingerie model who heads an cocaine-smuggling cartel
A lingerie model is believed to be the mastermind behind an all-women drug gang that smuggles cocaine into Britain.
An international arrest warrant has been issued for Angie Sanselmente Valencia, 30, who is said to only hire glamour models to transport the drugs from South America to Europe.
It's believed that Colombian-born Valencia had been seeing a Mexican drug lord known as 'The Monster' but split with him at the end of last year to form her own cocaine-smuggling gang.
.
'No-go': Police will not retrieve stolen van because who has it
When police visited Christopher Sims after his van was stolen, they had good news and bad news.
The good news was that they had a pretty good idea of the vehicle's new location.
But the bad news was that this location, a travellers' caravan site, was considered a 'no-go area' which the police would be ill-advised to visit because of the strong criminal element who lived there.
Mr Sims, 46, was initially pleased by the police response when they visited him the day after his white van was taken from outside his house.
But his view changed somewhat when they told him they had an idea who might have taken it but could not take any action.
He said: 'They said they were sympathetic but said that because of the situation they couldn't risk putting officers' lives at risk.
'They were telling me they knew where the van could be but they weren't prepared to go in and find it.
.
South Korea opens prison just for foreign convicts
Foreigners get own prison - and menu - in South Korea
South Korea has opened what officials say is the world's first purpose-built prison for foreign convicts. The prison offers Western food and satellite TV programs in English, Chinese, Russian and Arabic.
The number of foreigners in South Korean jails has more than doubled in the past four years to about 1,500.
The prison's director said the inmates would still be able to pursue the "Korean dream" that had led them to the country in the first place.
The prison is about 100km (62 miles) south of the capital, Seoul, in Cheonan. Inmates are given classes in Korean culture but can also view satellite TV from around the world and eat non-Korean meals. A number of the guards are fluent in English, Russian or Chinese.
.
Woman died in bathroom after…
Police waited 16 minutes to smash down the door after getting emergency call.
.
Posted by The Man at 2/24/2010 No comments: 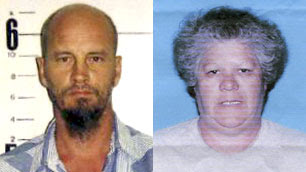 Paul Romero, left, reportedly gave $175 and a pet cockatoo to Donna Greenwell, right, in exchange for a four-year-old girl and five-year-old boy in her care.
Greenwell was sentenced to 30 month's.
Romero and his wife, Brandy, had pleaded guilty to two counts of sale of a minor in October.
.
Posted by The Man at 2/24/2010 2 comments: