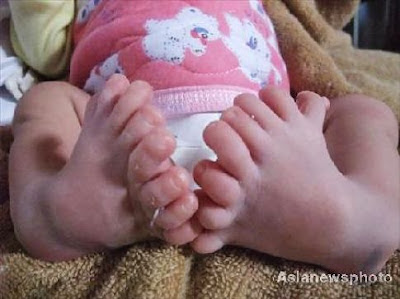 A baby boy with eight toes on each foot was discharged from a hospital in Leizhou, southeast Guangdong province on November 5, 2008. The baby has five fingers on each hand but doesn't have thumbs. Doctor said this might have something to do with genetics or environment pollution 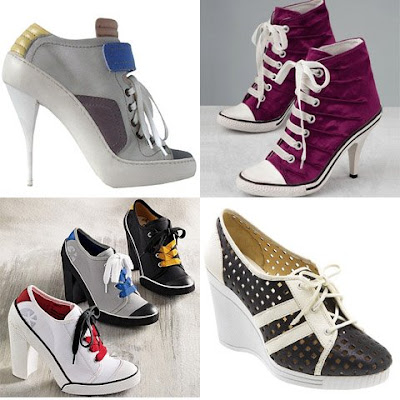 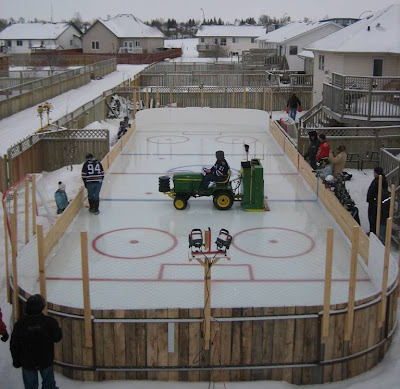 Watch out it's going to blow

A closeup view of a belly, fully bloated and pregnant looking.
"Stuff like this happens when you eat Mentos and Diet Coke at the same time."
.
.
Anonymous said...
Holy crap! His belly is gonna pop!
.
Yeah, and I wouldn't want to be around when it happen!
.
Posted by The Man at 11/12/2008 No comments: 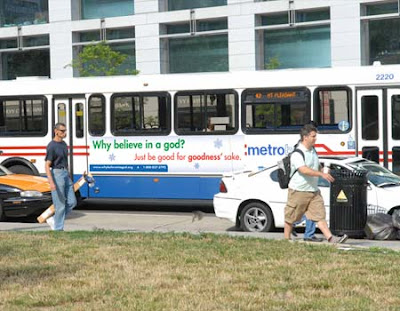 Labels: Holiday, In The News, Religion 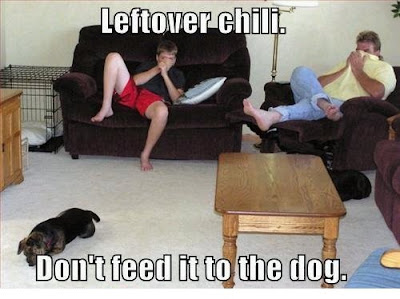 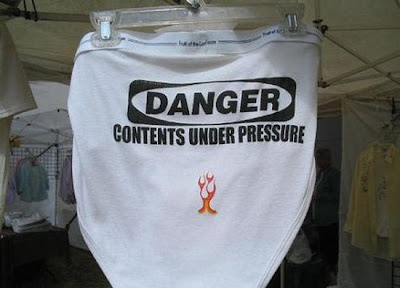 Very Itchy, Victoria's Secret Bras
A lawsuit filed against Victoria's Secret claims the brand's popular bras are responsible for injuring customers, causing rashes, hives and even permanent scarring.
Ohio resident Roberta Ritter filed a lawsuit against the company, claiming the Angels Secret Embrace and Very Sexy Extreme Me Push-Up bras she purchased made her sick.
"I had the welts ... very red, hot to the touch, extremely inflamed, blistery. It itched profusely, "I couldn't sleep, waking up itching."
Ritter's lawyers said they purchased the same bra types named in the suit and had them tested at a lab. The tests revealed that the bras contained formaldehyde, a chemical used in embalming.
.
Aerosol Spray May Help Sex Last Longer
A new drug could treat one of the most common sexual problems for men: premature ejaculation.
The drug, which is delivered via an aerosol spray to the affected area, works by reducing sensitivity and delaying the response of ejaculation.
The drug, called PSD502, was developed by the British company Plethora, and is comprised of the anesthetic compounds lidocaine and prilocaine.
In a European study, 300 men used the spray over the course of 12 weeks. The results indicated that the drug became effective within five minutes, compared to the placebo’s result of one minute. The men who used it did not report any harmful side effects.
.
Female Butt on Billboard Pornographic?
An Ohio billboard between the Cleveland suburbs of Parma and Brooklyn has raised controversy with its depiction of a nearly naked female backside.
The Roman Equipment Consultants ad, which is located on Interstate 480, is designed to sell slot machines.
Cleveland mother Amber Patty said she contacted the owner of the company about the billboard, which she said she considers to be borderline pornographic.
"He said, 'Sex sells. I'd put puppies on it, but it wouldn't sell,'" Patty said. "It's nudity, you know. Yes, he has a right to put it up, but I mean, we as a city we have a right to get it taken down."
.
Police arrest two for alleged train sex
London police said they have arrested a couple accused of engaging in a sex act during a ride on a crowded Virgin intercity train.
The guard on the Liverpool to London train reportedly saw the 41-year-old woman performing a sex act on her male partner in the train carriage via CCTV.
The two suspects were arrested at London's Euston station.
.
Four out of nine bills tested positive for cocaine.
WFSB-TV said it collected ones, fives, a $10 bill and a $20 bill from a grocery store, a coffee shop and a gas station and turned the money over to Fred Smith at the University of New Haven for cocaine-exposure testing, the station reported Tuesday.
Smith said his equipment was designed to detect amounts of as little as 50 nanograms of the drug. He said one nanogram is about the size of a pinhead split into 1 million pieces.
He said four of the nine bills given to him by WFSB tested positive for cocaine exposure.
"The drug likes to stick to the fibers in money, and passes easily from bill to bill," Smith said. "It's virtually impossible to get high from the amount that's on the bills."
He said the drug also sticks to other common objects.
"We're probably touching objects contaminated with cocaine every day without knowing it," Smith said.
.
FLORIDA NEWS
.
Man Charged With Stealing Communion Wafers During Mass
Police in Florida say they arrested a man after he tried to steal communion wafers during a church service.
The Martin County Sheriff's Office says 33-year-old John Samuel Ricci of Canton was cornered by fellow churchgoers when he grabbed a handful of wafers from the priest during communion services Saturday.
Ricci was being held down by offended parishioners when deputies arrived at St. Martin de Porres Catholic Church in Jensen Beach.
Picture and More
.
Smile! Get A Ticket, Get Your Picture Taken, Too
If you get pulled over by the police in Ormond Beach, Florida you'd better smile.
"An officer has the capability of taking a picture of the driver the vehicle and where the violation occurred," said Sgt. Jamie Gogarty of the Ormond Beach Police Department.
If a driver tried to fight an expensive ticket, police could use these pictures in court. The devices also cut down on the time it takes cops to write a ticket. The machines read drivers' licenses, instantly get driver information and a portable printer prints the tickets.
Some drivers question why police need pictures of speeders. "(I'd feel) my privacy was invaded," said Peggy Nardone. "I wouldn't feel safe. How do I know what they're going to do with that picture now?"
Ormond Beach police said the pictures gives them more evidence in court and even protects drivers whose cars might have been used without their knowledge. "If you don't have anything to hide, you shouldn't mind a picture being correlated with your identity," said Patrice Stoves. In three months, the city has only had one complaint.
The Florida Highway Patrol also started using the ticket writers this month but troopers do not take pictures so far.
.
Deputy Shoots Teen Accused Of Trying to Run Him Down
An Orange County deputy shot a teenager who he said tried to run him down with a stolen car. The 17-year-old already has a criminal record.
Eyewitnesses said the teen was sitting in the stolen car waving at people for help. They said the teenager couldn't move because he had been shot in his legs.
An Orange County deputy fired two bullets at a white Toyota Corolla. He was trying to catch the driver, 17-year-old Brett Fournier. Fournier finally gave up in the parking lot at a McDonald's on Silver Star Road in Pine Hills
News Video
.
Posted by The Man at 11/12/2008 No comments: