Even though she's young is she HOT...or...NOT ???
Would the amputee stop you? 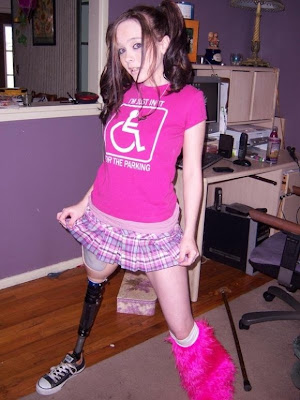 Ed said...
A little put off because she seems so young,
but on the other hand, I'd totally hit that.

Anonymous said...
The missing leg would just make things more interesting?
Opens a world of possibilities.
Or is that just too crass for anyone else to mention?
The girl is hot, leg or no leg.

Believe it or Not

Crystals come out of her eyes!!!


Girl Has Crystals Coming Out Of Eyes - video powered by Metacafe
.
TimO said...
Ahhhh, not.
That's an old 'geek' trick used by magicians, carnival folk and even psychics as 'proof' of their power. Nothin' new and nothin' real there..
Posted by The Man at 7/11/2008 No comments:

Global Warming Hits a Ski Resort
What to do with useless skis. 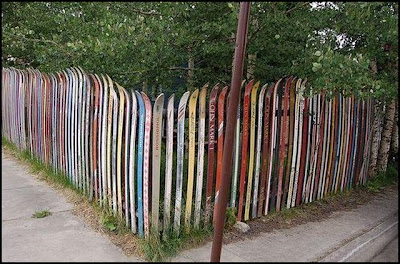 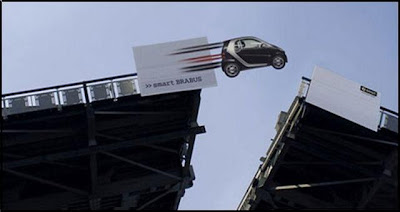 After leaving the kindergarten the kids were now in first grade.
.
Their teacher wanted them to be more grown up since they were no longer in kindergarten.
.
So she told them to use grown up words instead of baby words.
.
She then asked them to tell her what they did during the summer.
.
The first little one said he went to see his Nana.
The teacher said, "No, no, you went to see your Grandmother. Use the grown up word."
.
The next little one said she went for a trip on a choo-choo. The teacher again said, "No, no, you went on a trip on a train. That's the grown up word."
.
Then the teacher asked the third little one what he did during the summer. He proudly stated that he read a book. The teacher asked what book he had read. He thought about it, puffed out his chest and in a very adult way replied, "Winnie the Shit."
Posted by The Man at 7/11/2008 No comments:

58 year-old Doctor Wen Shengchu wanted to welcome Olympic visitors from around the world to China, so he decided to set up over 200 miniature flagpoles -- in his head.
Attached to acupuncture pins, the flags represent competing nations and his hope for world peace.
He insists that his training in acupuncture makes the two-hour stunt, which he has performed to gawping crowds across the country, an invigorating experience.
"It doesn't hurt at all, but instead every time I do it, I feel more energetic," he said as he inserted the flags into his scalp.
.

Elephant Turns To Highway Robbery To Feed Its Self.

Passengers on the National Highway 215 in Orissa have to deal with an unusual highway robber: an elephant which snatches food.
The elephant doesn’t allow any vehicle on a stretch of the National Highway pass through before taking its share of food. As a vehicle comes to a halt the elephant smells the baggage and takes the food away.
.
Posted by The Man at 7/11/2008 No comments: