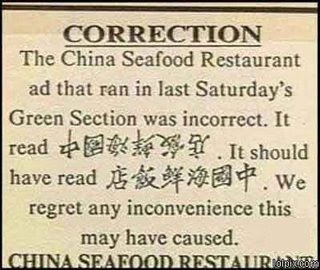 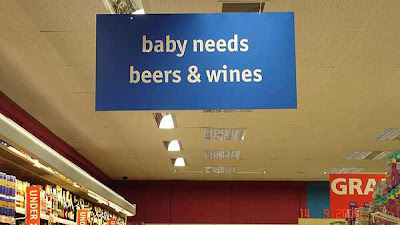 I wonder what’s in the next aisle...
Valiums & Birth Control 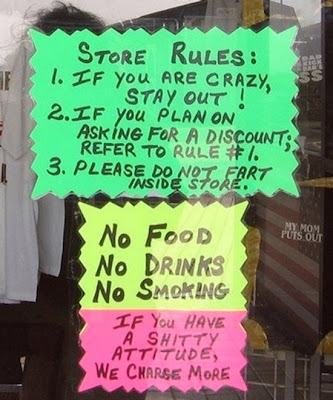 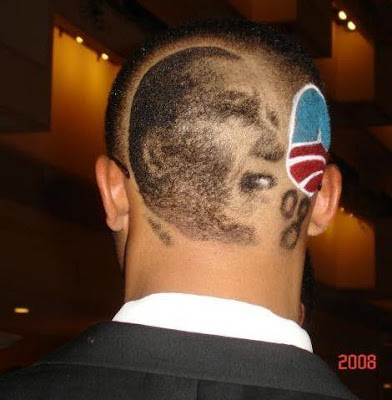 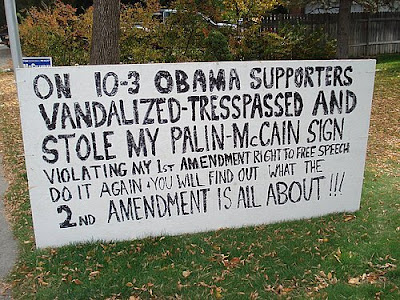 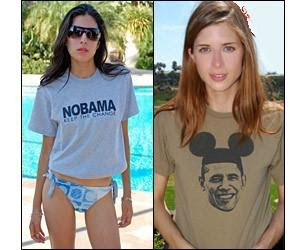 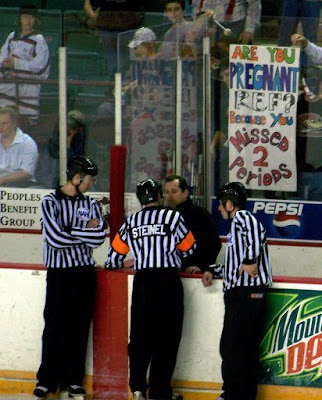 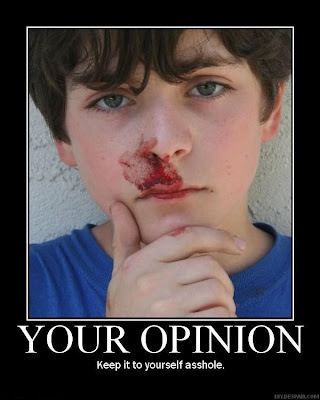 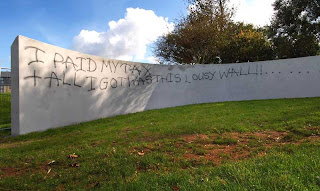 The ironic thing is that the wall had been built for basically for the same thing.
A £3,000 blank wall built for teenage graffiti artists by a council was painted by a disgruntled taxpayer with the slogan: "I paid my tax and all I got was this lousy wall".
.
The 6ft high by 30ft long wall was installed so youths could practice their graffiti artwork without vandalizing local property.
.
But ahead of its opening on October 31 a fed-up resident sneaked behind a security fence and daubed a protest about the use of taxpayer's money.
Posted by The Man at 10/16/2008 No comments:

Dad named his daughter "Sarah McCain Palin"
Mark Ciptak is doing more than putting up a yard sign for the McCain-Palin ticket. He's named his daughter Sarah McCain Palin. But he might get some flak at home. The Elizabethton, Tennessee, man says he ignored the name he and his wife had picked out, which was Ava Grace. Ciptak says when he filled out the paperwork for his new daughter's birth certificate, he substituted Sarah McCain Palin. The blood bank employee for the American Red Cross says his wife will still take some more convincing.
.
Security experts warn that hackers could target your cell phone.
Internet hackers are moving their attention to mobile phones and could harness thousands of devices to dial up premium rate numbers, security researchers have warned.
As cell phones get more computing power and better Internet connections, hackers could capitalize on vulnerabilities in operating systems to create armies of "zombie phones," according to a report from experts at Georgia Tech.
.
'Drunk Horse" rescued from swimming pool
A horse had to be rescued by firefighters after becoming 'punch drunk' from gorging on too many fermented windfall apples and falling into a swimming pool. The horse, named "Fat Boy", escaped from its stable, broke into a nearby garden with another pony, and began munching the fallen apples. It is thought that the rotten fruit had begun to ferment, causing the animal to become 'drunk'.
Twelve-year-old Fat Boy stumbled across the garden, and fell into the outdoor swimming pool which was covered by tarpaulin.
Picture and More
.
How ironic man dies at Cemetery
A 77-year-old man died in a bizarre accident at the Saint-Gregoire cemetery in Buckingham.
Gatineau police said the man had gone to work on his parents' headstone.
"It appears he moved the stone and was digging a hole around the foundation when the concrete block fell on his back."
.
Mother and son arrested in bizarre case
Two suspected of burning their relatives remains in barbecue, stealing checks
The daughter and grandson of an 84-year-old Tehama County woman who apparently died in December have been arrested on suspicion of cashing her retirement and Social Security checks after they allegedly cremated her body on a makeshift barbecue behind their Edith Avenue home.
"You could make a movie out of this," Capt. Paul Hosler of the Tehama County Sheriff's Department said Tuesday.
Pictures and More
.
Lawsuit against "GOD" thrown out of court
A judge has thrown out a Nebraska state legislator's lawsuit against God, saying the Almighty wasn't properly served due to his unlisted home address.
Douglas County District Court Judge Marlon Polk ruled that under state law a plaintiff must have access to the defendant for a lawsuit to move forward.
State Sen. Ernie Chambers filed the lawsuit last year seeking a permanent injunction against God. He said God has made terroristic threats against the senator and his constituents in Omaha, inspired fear and caused "widespread death, destruction and terrorization of millions upon millions of the Earth's inhabitants."
Chambers, who graduated from law school but never took the bar exam, thinks he's found a hole in the judge's ruling. Chambers said, "Since God knows everything, God has notice of this lawsuit."
.
Internet use "Good for the Brain"
For middle-aged and older people at least, using the Internet helps boost brain power, research suggests. A University of California Los Angeles team found searching the web stimulated centers in the brain that controlled decision-making and complex reasoning.
The researchers say this might even help to counteract the age-related physiological changes that cause the brain to slow down. It has long been thought that activities which keep the brain active, such as crossword puzzles, may help minimize that impact - and the latest study suggests that surfing the web can be added to the list.
.
However, researcher studies also shows that using the Internet extensively will lead to overweight. So it's like damn if I do and damn if I don't.
.
Mom Gets 10-Years after boyfriend impregnates her young daughter
An eastern Idaho woman whose boyfriend impregnated her 9-year-old daughter has been sentenced to 10 years in prison.
Isabel Chasarez, 27, must serve at least one year in prison before she is eligible for parole, 7th District Judge Brent Moss ordered Tuesday at the sentencing hearing.
Chasarez pleaded guilty in August to failing to provide proper prenatal care for her daughter.
Her 38-year-old boyfriend, Guadalupe Gutierrez-Juarez, pleaded guilty to rape in September. He is scheduled to be sentenced Oct. 28 and faces life in prison.
The girl became pregnant at age 9, sometime between Aug. 1 and Sept. 30 2007, authorities say, and gave birth in April.
.
"Sex Offenders" Homes to Display a Special Pumpkin Symbol
Sex offenders in Maryland have begun receiving paper signs in the mail that read "No candy at this residence," which they must post on their front doors or possibly face a parole violation.
The signs began arriving last week in the mailboxes of the about 1,200 violent and child-sex offenders across Maryland. The signs were accompanied by a letter explaining they must stay at home, turn off outside lights and not answer the door on Halloween.
Maryland is also distributing pamphlets statewide to warn families to stay away from homes with the pumpkin signs.
.
Posted by The Man at 10/16/2008 No comments: