Man using crazy glue, gets stuck in jail
Police arrested a man on vandalism charges after he allegedly crazy-glued a woman's electronics into the wall sockets of her bedroom.
Abram Perkins, 40, was held in the Shelby County Jail on $2,000 bond following his arrest in the Whitehaven area.
According to an affidavit, Perkins plugged the woman's electronics into sockets with crazy glue and poured water on some equipment, causing $4,300 worth of damage.
After confronting Perkins in her bedroom, which the victim also uses as an office, the woman asked him what happened to her things.
Perkins laughed and admitted to the vandalism, according to the affidavit. He then left, taking some items with him.
Police arrested Perkins at the house across the street from the crime scene.
.

woman, 100, has bank account dating back to 1913
An woman who just turned 100 years old has taken customer loyalty to the extreme: She's still using a bank savings account that's been around almost as long as she has, since the year before World War I.
.
Boy, 10, ticketed for improper seat belt use
A 10-year-old boy has been given a ticket for wearing his seat belt incorrectly.
Fourth-grader May says he was in a minivan's passenger seat when he stuck his head out the window and his seat belt slipped. A Leander police officer pulled over the van that 's 19-year-old aunt was driving and gave the boy a ticket.
law says the adult in the car is at fault when a child isn't properly secured by a seat belt. The aunt was not ticketed.
Manager Robert Powers said the officer made a mistake but the court decides whether to dismiss the ticket.
printed his name on the ticket, saying "I don't have a signature because I'm 10 years old."
.

Man abandons nearly $1 million
Law officers in have confiscated nearly $1 million in two bags that a man abandoned after denying that he knew anything about the cash.
The money-filled suitcase and gym bag were seized from a man from staying at an upscale hotel.
Federal agents received a tip about possible drug money laundering and monitored the man's comings and goings, then confronted him as he prepared to check out. Investigators say the man, who had a valid visa, said he was given the bags for delivery in . No further details were provided.
The man was not arrested and left the hotel, abandoning more than $995,000.
.

Burglar showers in home, flees with clothes behind
A burglar failed to make a clean getaway after showering in a home.
Police say the suspect dropped a shirt and sock while fleeing when the resident came home.
The Record newspaper reports police believe the suspect took jewelry and prescription medication before opening up a new bar of soap and jumping in the shower.
Police also say a fingerprint left behind has them looking for a 19-year-old who once lived nearby.
.
Posted by The Man at 6/04/2011 No comments:

How is it done?

Police say a man who ran naked through a neighborhood before jumping into a pool full of children. The 20-year-old man ran in and out of traffic in the northeastern community Wednesday afternoon before jumping a fence and into the pool.
.

.
He then enjoyed a solo skinny dip for several minutes until police arrived and coaxed him out of the water. Officers escorted him away in handcuffs and a towel. He was taken to a hospital by ambulance for evaluation and probably won't be charged.
.
Posted by The Man at 6/04/2011 No comments:

It’s my money and I want it now!

Moon Run firefighters had to rescue a woman after her hand got stuck in an automated teller machine.
. 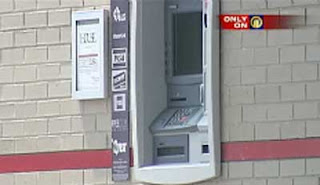 .
The McDonald woman said she was getting cash out of the machine in Robinson when the incident happened.
Rescuers said they had to use a special piece of equipment to free the woman.
Fire Chief Paul Kashmer said it was the second time in less than a year that his firefighters had to use special tools to save someone from a machine.
VIDEO
.
Posted by The Man at 6/04/2011 No comments: