Students disciplined after farting on bus
A Canal Winchester, Ohio man says he's amazed his 13-year-old son and another boy were suspended from the school bus for a day after passing gas and causing a ruckus.
James Nichols says the incident led to giggling and heckling and prompted riders to lower windows.
The boys apparently were considered repeat offenders because a driver had warned them after a similar indiscretion weeks ago. This time, officials at decided it was an obscene gesture that violated the student code of conduct.
Nichols says its "laughable" the boys would be punished for something natural and unintentional.
His wife says she's offended by it after recently being hospitalized with gastro-intestinal problems.
.

Thief returns victim's debit card after getting cash
police are searching for a man who broke into a home, stole a woman's debit card and then returned it to the victim about 10 minutes later.
Police say the man was armed with a knife when he broke into the house. The thief woke a woman, showed his knife and demanded cash.
The victim said she didn't have any cash but handed over her debit card. Police say the suspect used it to get money and then returned the card about 10 minutes later and fled.
.

Blind man confused over 'mystery enema'
The 53-year-old Californian man answered the door to a woman who claimed she was there to give him an enema.
As the man had recently undergone intestinal surgery, he assumed the visit was part of his rehabilitation and allowed the woman into his home to perform the procedure.
The woman took him into the bedroom, had him drop his trousers and lie face down on his bed, before performing the enema in less than two minutes.
A day later, the man began wondering about his experience and contacted the Sonoma Police Department to report the incident.
The investigating officer contacted the man's doctor and was told that an enema had not been prescribed, ordered or approved.
Due to the condition of the man's eyesight, he was unable to offer police a description of the mystery woman and she left no clues of her identity at the scene.
police have now turned the case over to the domestic and sexual assault unit of the Sonoma Sheriff's Office, who has yet to make sense of the incident.
.

Mom investigated for using Botox on daughter
authorities are investigating a mother who said on a national television program that she gives her 8-year-old daughter Botox injections.
Trent Rohrer with the city's Human Services Agency says that officials need to sit down and talk with Kerry Campbell and her daughter, Britney. Rohrer says it was unusual for a mother to inject a child with the anti-wrinkle shot.
appeared with her daughter Thursday on ABC's "Good Morning America." She enrolls Britney in beauty pageants and says she got the idea to give her daughter Botox from other pageant mothers.
Rohrer says his office received numerous calls from people concerned about Britney's well-being after the TV appearance.
Botox injections can be painful and are not recommended for anyone under the age of 18.
.
Posted by The Man at 5/13/2011 No comments:

A driver who swerved to avoid a rabbit in the road made a splash landing when she sailed through a garden hedge into a swimming pool.
. 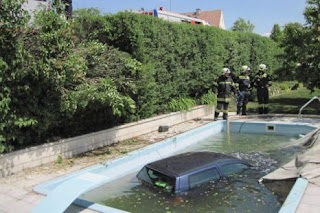 .
Martina Boller, 42, told police in , she'd braked and steered suddenly when she realized the bewildered bunny wasn't going to move.
One firefighter said: 'She managed to land exactly in the pool which would have been quite a stunt if she'd meant to do it.
'Apart from being very wet and very embarrassed the driver was not hurt.'
.
Posted by The Man at 5/13/2011 No comments: 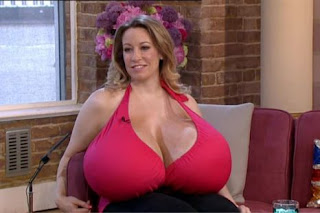 .
At just 5ft 3, Chelsea Charms has earned thousands of dollars from performing as an exotic dancer.
Appearing on ITV's This Morning Chelsea explained how she went from naturally being a D cup to her current gargantuan size.
Her first operation was at 20 to a DD cup, the second operation was a year later and went up to a HH cup, and Chelsea's third op called Polypropylene String Breast Implants - has now been banned.
She said: 'It's basically a cord and it pumps fluid in the breast pocket. The string implants irritate the breast pocket which, in turn, promotes the production of fluid.'
The fluid is absorbed by the implant, resulting in continuous, gradual growth of the breasts.
She admitted she got the enhancements mainly in order to 'get noticed'.
.
.
'Obviously I can't have them forever and obviously I will reduce eventually...but I don't think I could go back down to a D cup.' she added.
is yet to get them officially measured and Maxi Mounds is currently in the Guinness Book of Records for having the biggest breasts.
She believes her breasts are bigger, but she is waiting for Guinness to get in touch.
.
Posted by The Man at 5/13/2011 No comments: