Delhi man gets tattoos of flags to promote world peace

A 70-year-old businessman from has tattooed 305 flags of different countries on his body to promote amity among nations. Har Prakash, who also likes to call himself Guinness Rishi, hopes to get more flags inked on his body and create a new world record.
. 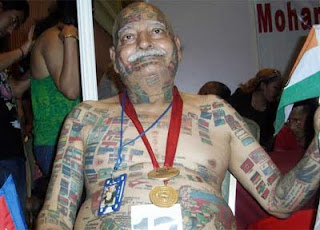 “People call me a joker, a mad man. It doesn’t bother me,” Prakash said. He is currently in , to attend the first international tattoo conference.
The tattoos on his body include 305 flags of different countries, 185 maps, 165 mini-flags and 2,985 characters. “My dream is to go around the world several times,” he said.
VIDEO
.
Posted by The Man at 4/27/2011 No comments:

The bodies of two unidentified men were discovered Sunday buried in a 15-foot-tall pile of manure at a small horse farm in Gary Indiana.
A man who kept horses at the stable noticed an arm sticking out of the massive pile of manure and called police, said Gary Det. Cpl. Mike Barnes.
Police unearthed the body and used a backhoe to sift through the steaming mound of composting manure in search of other remains, eventually finding the second body, Barnes said.
. 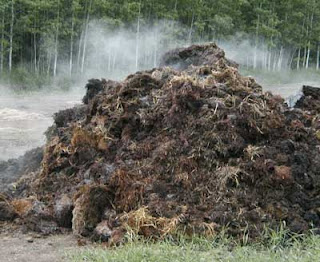 "It was the biggest pile of (manure) I have ever seen," Barnes said. "They've been putting it back there for years."
The Lake County Coroner’s office has made a preliminary finding of homicide, but further details are pending completion of a full autopsy.
The farm is surrounded by wooded wetlands at the dead end street The pile is near the rear of the property and can be reached without walking past the stables or houses on the property, Barnes said.
.
Posted by The Man at 4/27/2011 No comments:

Workmen fill in pothole with remains of rabbit carcass

Workmen tarred over a dead rabbit as they filled in a hole in the road. Carl Garnham, 41, was shocked to find a newly-repaired pothole with the rabbit’s body sticking out from under the patch.
. 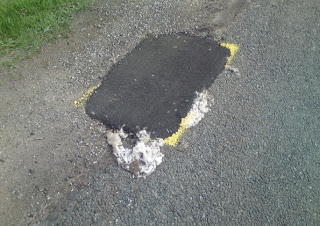 .
He said: “I was out with a friend heading to the Strines pub when we parked to admire the view – and saw the pothole.
“At the time we laughed a little about it and thought that the workers who had filled in the hole had maybe a strange sense of humor or perhaps were running out of patching tar. God forbid they start filling potholes in with cats and dogs!
“It is all very funny but what about the damage to the car suspensions because of poor road maintenance. Do they need qualifications to fill these potholes?”
.
Posted by The Man at 4/27/2011 No comments:

'Females are failed males,' says 16th century book
A guide written in 1505 has been found and it contains 'secrets' about females that take political incorrectness to extremes.
Perhaps the worst of the advice is that ‘females are failed males’. The book, De Secretis Mulerium (The Secrets of Women), also suggests men wanting to check if a woman is a virgin should ask her to sniff lettuce. If she then wants to go to the toilet she is ‘corrupted’.
Other revelations include women being able to kill animals with a glance during their time of the month and odd food cravings in pregnancy being down to ‘evil humors’.
Husbands who want a male child are told to give their wives wine that contains the pulverized womb and intestines of a hare. Once pregnant, the female will have a girl if her left breast is bigger than her right and a boy if it’s the right.
.

Females charged in fight over a restroom
An 18-year-old woman has been charged in an attack on a transgender woman over using a McDonald's restroom in a suburb of .
Police announced Monday that Teonna Monae Brown was arrested Friday and charged with first- and second-degree assault.
A video of the April 18 fight posted online shows an assault by two young women on 22-year-old Chrissy Lee Polis.
Polis said that before she was attacked she heard a teen say she was a man using the women's restroom. According to charging documents, a 14-year-old girl charged as a juvenile in the case told police that she and Brown fought with Polis over using the restroom.
.

Hacking case involves preteens, sex pics
Two Issaquah, Wash., preteen girls accused of hacking into a classmate's Facebook page and posting sexually explicit photos and messages have been charged with cyberstalking and first-degree computer trespassing.
The girls, ages 11 and 12, have been under investigation since the alleged victim's family contacted Issaquah police on March 18, according to the charges filed Tuesday in King County Juvenile Court.
According to the charges, the two defendants used the victim's password information to post sexually explicit content on her Facebook page. They also posted messages that indicated the victim was willing to perform sex acts on people.
The defendants instant-messaged some boys to arrange dates where sex acts were to be performed by the victim, according to the charges.
.
Posted by The Man at 4/27/2011 No comments:

Police in arrested Shawn Batie, 42, at 9:41 p.m. on Friday night after they said he was found under the influence of methamphetamines.
. 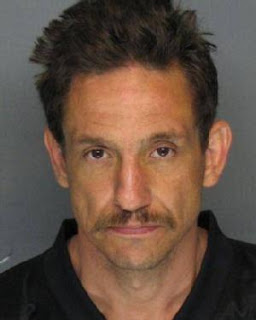 .
Officers responded to a call where a man later identified as Batie was found standing in the dirt next to the cemetery with a flashlight, yelling in the dark.
Police said that Batie was wearing an Oakland Raiders jacket, a g-string and a hair scrunchie around his genitals. He was also wearing socks.
.
.
Officers said that he was very jittery and his pupils were dilated. They took him into custody on suspicion of being under the influence, which was later confirmed at the jail where it was discovered that he was also a parolee at-large, police said.
.
Posted by The Man at 4/27/2011 No comments:

Biker towing a car in Brazil