They Are Inside Me

Maggots in My Head
While living inside the host, the presence of
botflies creates painful pustules that secrete pus and other fluids.
.
Someone’s Nostrils Full of Maggots
.
Posted by The Man at 8/26/2009 No comments:

Stimulus Checks Sent to 1,700 Inmates
The inspector generals office for the Social Security Administration is looking into the problem as part of its broader audit on stimulus spending. The Social Security Administration acknowledged the $425,000 glitch following a report that nearly two-dozen inmates in Massachusetts had wrongly received the $250 stimulus checks.
A total of 3,900 inmates not receiving benefits were sent a stimulus check and that of those, 2,200 were due the payment because they were out of prison late last year. The other 1,700 were mistakenly sent the checks.
The number was "relatively small" given the fact that 52 million total payments were made, and that most of the mistaken payments have been returned by the correctional institutions. He did not provide specifics for how much of the $425,000 had been returned.
.
Robber Dies After Spray Painting Face to Conceal His Identity
A robbery suspect in South Carolina has died after police say he spray painted his face to conceal his identity during the crime..
Investigators said 24-year-old Thomas James started having trouble breathing immediately after the crime and died shortly thereafter, the station reported. Cause of death had not been released.
Officers said 23-year-old Michael Gregory Thomas held five employees of a cell phone store at gunpoint and stole wallets, purses and credit cards.
The employees identified Thomas as a suspect.
.
Giraffe penis repeatedly stolen over and over
Visitors to a tourist attraction in Berlin have been making off with an unusual memento -- the 30 cm long penis of a Lego giraffe.
The Lego phallus belongs to a six meter tall model that has stood outside the entrance to the Legoland Discovery Center on Potsdamer Platz since 2007.
"It's a popular souvenir," a spokeswoman for the center said Tuesday. "It's been stolen four times now ..."
The penis is made out of 15,000 Lego bricks. It takes model workers about one week to restore the long-necked animal's manhood at a cost of 3,000 euros (2,600 pounds), the spokeswoman said.
The center is now erecting a metal construction to protect the giraffe's genitalia.
.
Turkeys Found Stuffed.......With Cocaine
Two turkeys are recovering after being cut open by drug smugglers and stuffed with five kilograms of cocaine.
Police were amazed to find the drug surgically implanted in the bloated birds in Peru.
Acting on a tip-off, officers stopped a Turismo Ejecutivo SRL bus outside the city of Tarapoto in the central jungle state of San Martin, officials said.
Police were puzzled when they found the turkeys in the crate, but didn't find the cocaine, Tarapoto's anti-drug police chief Otero Gonzalez said.
They then noticed that the two turkeys were bloated.
"Lifting up the feathers of the bird, in the chest area, police detected a handmade seam," he said.
A vet extracted 11 oval-shaped plastic capsules containing 1.9 kilograms (4.2 pounds) of cocaine from one turkey.
A further 17 capsules with 2.9 kilograms (6.4 pounds) were recovered from the other, he said.
Their feathers were ruffled but both turkeys survived the procedure.
.
Posted by The Man at 8/26/2009 No comments: 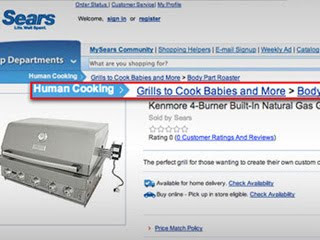 The Web site for department store giant Sears offered a gruesome sales pitch Thursday — a grill that could "cook babies" and be used to roast body parts.
The goof, first reported by TMZ.com, listed any grill viewed by visitors to the company's Web site under the category of "human cooking > Grills to Cook Babies and More > Body Part Roaster." The wording apparently was the work of a mischievous customer and, when discovered, was quickly changed, but not before TMZ.com captured a screengrab.
Representatives from Sears said they were victimized by "someone visiting" the company's Web site.
"We discovered earlier today that someone visiting our site had defaced a limited number of product pages," the company said. "It’s important for our customers to know that we have no reason to believe that any of our customer or financial data were compromised.
"We’ve already taken steps to prevent this from happening again. We sincerely apologize to any customers who may have seen this on our site."
.
Posted by The Man at 8/26/2009 No comments: