As men age, we end up seeing more and more of the Medical establishment, which nowadays, has more and more women in it.
For example, my family doctor recently referred me to a female urologist. I saw her yesterday and she is absolutely gorgeous. She's beautiful and unbelievably sexy. She told me that I must stop masturbating. I asked her why, and she said, "Because I'm trying to examine you."
.
trail dust said...
She didn't mind it before the exam started? Does she take Cigna?
.
I wonder if he went to see her to get Viagra?
.
Posted by The Man at 1/31/2009 No comments:

It’s Against the Law to Recycling in Russia 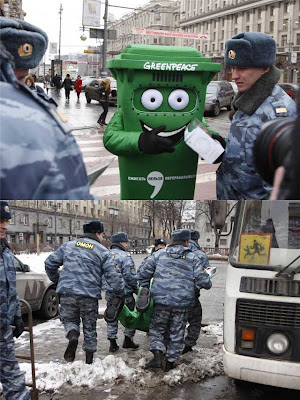 Make sure to set the dryer to delicates!

I Knew I Could Make Him Smile - NSFW 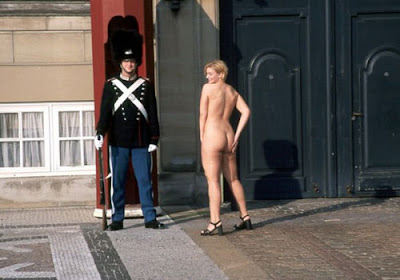 Fat man on a mini-bike?

Sister beats up bride at wedding reception
Annmarie Bricker, 23, of Valparaiso, Ind., was arrested on a misdemeanor charge of battery after she was arrested for attacking a bride at a wedding.
A woman who wasn’t invited to her sister’s wedding reception showed up anyway and attacked the bride, pulling out clumps of her hair, police said.
PICTURE
.
Take the $20G, Keep Your Stuff
Facing snowballing medical expenses for their two young disabled children, Gregg and Brittiny Peters quipped they might need to sell everything they owned to stay solvent. As the bills tipped $10,000, however, the idea was no longer funny.
So on Thursday, the Georgia couple accepted a winning $20,000 eBay bid for all their belongings minus their house. It came with one catch. The winning bidders, Donnia and Keith Blair of Texas, want the family to have the money, but keep their stuff.
Seems like the perfect happy ending, except the Peters don't want the money. They say the whole idea was to start over, not take a handout.
.
Transit cop may have pulled wrong gun
The transit officer Oakland, California who shot and killed an unarmed man may have mistakenly pulled his service pistol instead of a stun gun, his lawyer said Friday.
Defense attorney Michael Rains made the argument during a bail hearing for 27-year-old Johannes Mehserle. Alameda County Superior Court Judge Morris Jacobson later set bail at $3 million.
Jacobson said he set the high amount in part because he considered Mehserle a flight risk after the former officer fled to Nevada during the initial investigation.
.
Man arrested for 190th time
Police say a 46-year-old man was arrested for the 190th time in Boca Raton Florida last week.
Authorities arrested Henry Farrell after he tried to carjack a man outside a Boca Raton coffee shop. Police said Farrell threatened to kill the man after he refused to give Farrell a ride.
Officer Sandra Boonenberg, a police spokeswoman, said authorities have spent years dealing with Farrell, who "lives locally and apparently likes Boca Raton."
Farrell is being held without bond on charges of carjacking, possession of marijuana and possession of paraphernalia.
Henry Farrell's mugshots over the years.
.
Woman faces CSC charges involving a toddler
Melissa S. Barry, 29, of Reese remains jailed on $150,000 bond as she waits to face criminal sexual conduct charges involving a 15-month-old boy.
Tuscola County Prosecutor Mark E. Reene on Friday authorized a six-count warrant charging Barry with two counts of first-degree criminal sexual conduct, one count of second-degree criminal sexual conduct and three counts of third-degree criminal sexual conduct.
"The defendant is not a relative of the victim but was residing with the victim and his family during the time the incidents occurred in January," Reene said.
First- and third-degree criminal sexual conduct involve penetration, second-degree involves touching. First-degree is a felony that carries a maximum life sentence, while second-degree involves a 15-year maximum penalty. Third-degree carries a two-year term.
.
Posted by The Man at 1/31/2009 No comments: