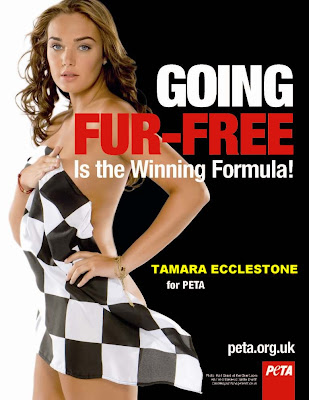 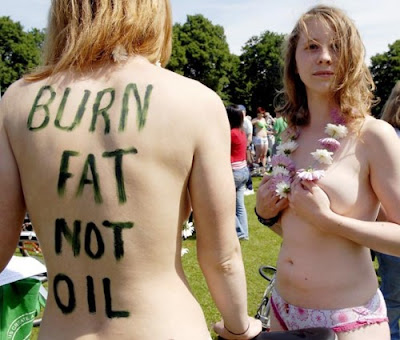 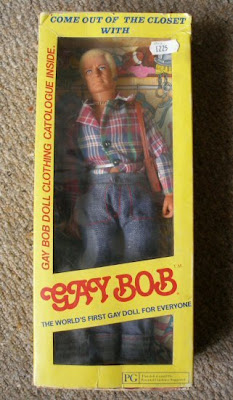 .
.
.
.
.
Come out of the closet with "Gay Bob"
In 1977, Gizmo Development released the first "out" action figure, Gay Bob, who had fabulous flocked hair and a "man purse," and who also came packed in a closet, just ready to sally forth and do some serious shopping. Bob also came packing with more firepower than G.I. Joe in his pants (Gay Bob had a penis).
Posted by The Man at 10/07/2008 No comments:

The local hangout just north of Tokyo employs a pair of Japanese monkeys called Yat-chan and Fuku-chan to serve their customers.
The younger of the two, Fuku-chan, usually begins the first shift and is quick to hand out customers a hot towel to help them clean their hands before they order their first drinks.
Fuku-chan, who is four, has two years experience under his furry belt and his work load is limited to hot towels.
Both monkeys are well appreciated by customers who tip them with boiled soya-beans to enjoy during their down time.
.
.
It’s bad enough they send jobs over seas and use robotics for assembly lines now they use monkeys for waiters.
Posted by The Man at 10/07/2008 No comments:

Labels: Animal's, Not Using Their Brain

Some of the Worst Jobs in the World

We all think our jobs are bad, but what are the worst jobs in the world?
Everyone complains about their job regularly, except for those of us who are lucky enough to get a job in a field that is our passion. Most people complain about their workload, their job, their dull office, but what are the worst jobs in the world?
.
Barnyard Masturbator
Your job is to collect animal sperm from all the barnyard animals. Depending on your budget, you could receive anything from an electric probe to a simple tea towel to cover your hands. It's your job to get the sperm using that equipment. Sometimes you'll even have to wrestle a bull's penis into the collection bag.
.
Janitor
While the job title janitor mightn't sound too bad, that's not the type of janitor I'm talking about. I'm talking about a specific type of janitor, the janitor at a pornographic theater. That's right, the one who has to clean everything up after everyone else has had their fun. I doubt anyone would consider the paycheck those guys get as sufficient.
.
Bomb Expert
This might sound like a terribly job on the surface, but consider what it really means. While most people want to go about living their ordinary lives, avoiding bombs wherever possible, your job is to find those bombs and disarm them. That's right, you go looking for places that you have a high likelihood of dying in.
.
Embalmer
You spend your whole living life around dead people. Not exactly the best company one could imagine. That's not all though. You have to work long hours, alone in a deserted room (apart from your dead buddies). Then add onto that the fact that you have to remove people's guts, wash their dead bodies and deal with the occasional kick as a result of rigor mortis, and you'll find that you've got one tough job.
.
Lab Technician
Not the good kind of lab technician, most definitely the bad kind. The kind that spends all day looking at urine and stool samples which isn't exactly enjoyable. Add onto that that the pay is generally not great, and you also have to handle what you're examining.
.
You'll find that you could probably find a better job if you really tried.
.
What Kind of Job do You Have?
Posted by The Man at 10/07/2008 No comments:

Prison secretary admits sex with inmate
A former prison secretary of 14-years says she had an ongoing relationship with an inmate took her children off her life insurance policy and made the inmate her beneficiary instead.
Janine Sligar, 47 a former secretary at the Florence Federal Correctional Complex, pleaded guilty Friday to having an ongoing relationship with the inmate, who wasn't named.
Sligar's admitted that she had sex with the inmate between 10 and 20 times last year in the prison. Sligar, also admitted using her phone to make graphic pictures of her and the inmate. She faces a maximum of 15 years in prison, though a sentence of just over a year is likely. Sligar is scheduled to be sentenced Jan. 23. Investigators found a journal with entries, and letters and photographs of a sexual nature in Sligar's Wray home, the plea agreement stated. In the plea agreement, she admitted obtaining an additional cellular telephone "with a non-local number so the inmate could call her without raising suspicion."
.
Mom accused of performing sex act on toddler son
A mother accused of performing oral sex on her toddler son and e-mailing photos of it to a friend has been charged with sexual assault and incest.
Police say 31-year-old Alicia Lee of Denver sent the pictures to a friend, who forwarded them to the 2-year-old boy's father. The father then called police. According to a copy of the e-mail reported by the Rocky Mountain News, the mom told her friend in April that she thought about the sex act while changing the boy's diapers. The next day, she sent a photo of the act to a friend and said the boy giggled. The child was placed in foster care last month. Lee is free on $50,000 bond and is due again in court Monday.
Picture
.
Starbucks wasting 6 million gallons of water a day
A U.K. newspaper is reporting that coffee-giant Starbucks wastes about 6 million gallons of water each day because stores are told to keep water running in their sinks.
The water is kept running as part of a company policy to keep utensils clean and wash away food. It’s enough daily water "for the entire 2 million strong population of drought-hit Nambia in Africa or fill an Olympic pool every 83 minutes." The investigation started after it was tipped off by an employee and then a letter was sent to Starbucks confirming the policy to keep running water constantly into dipper wells. The practice is done in both American and U.K. Starbucks stores to maintain health standards.
.
Fake Cop Arrested
Cop impersonator insists cuffs and baton in his car are just sex toys
A Palisade man packing handcuffs and a badge, among other gear, was arrested Wednesday allegedly speeding in a car fixed with an overhead blue emergency light.
Thomas A. Yates, 43, was booked at the Mesa County Jail on suspicion of class-six felony impersonation of a police officer, speeding and misdemeanor equipment violation. Yates was stopped by a Palisade police officer for allegedly speeding 10 miles over the posted limit at West First Street. The officer also noted a blue light on top of Yates’ Ford Taurus, according to an arrest affidavit. The light wasn’t activated.
Yates allegedly told the officer that he used it as required for his job as a safety officer with a roofing company. The officer confirmed Yates’ employment — the roofing outfit currently employs "10 to 12" people. Handcuffs were allegedly found on the car’s floorboard. Yates allegedly explained they were sex toys, the affidavit said. Yates allegedly said a standard police-issue baton found in the trunk was used for "role play." A gold badge with "Investigator" written at the top — which was fixed to a rope with a card that had a Colorado state seal on it — was allegedly turned over by a female passenger in the car, according to the affidavit. The woman said Yates asked her to hide the badge when they were pulled over.
"(Woman) explained Thomas had told her he used his light on the Interstate to get places faster," the affidavit said."(Woman) stated that he utilized his blue light this morning on the Interstate because he was late for work."
.
Don't Drink & Trike
Oregon State Police (OSP) reports warning William David Bjorkquist, 58-year-old man from riding this purple "Miami Sun" adult-sized tricycle while intoxicated. They later arrested him when he was riding it again, still impaired.
.
Cleaning woman stole a $42,000 ring
A 19-year-old cleaning woman has been charged with stealing a $42,000 diamond ring from a client's home in the village of Oconomowoc Lake and selling it to a Brookfield jewelry store for $140.
Jennifer R. Douglas, of Hartland, a former employee of home-cleaning service Merry Maids. The theft was reported Aug. 12, Wiemer said. The ring, a family heirloom, has diamonds in a platinum setting.
Douglas told police under questioning that the ring was sold to the Brookfield jewelry store. Police recovered the ring the day before the store was going sell it or have it refashioned elsewhere, Wiemer said.
Posted by The Man at 10/07/2008 No comments: