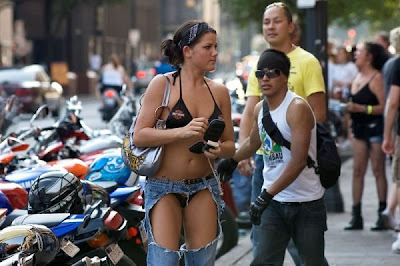 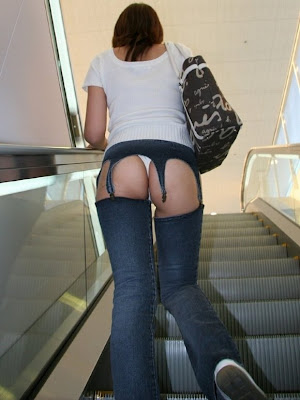 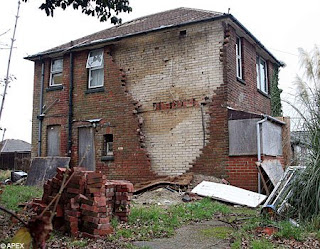 Dressed as workmen, they attempted to take the building, brick by brick and slate by slate.
The pair even stopped for lunch during their audacious theft and a neighbor inadvertently helped them by collecting fallen tiles.
All the roof slates were taken and one of the walls of the three-bedroom semi was wrecked before the alarm was raised.
The owner, a property developer, said the damage would cost him £10,000 to repair.
'You've got to laugh at it,' he said.
'They were literally stealing my house. They went there with hard hats and yellow jackets and took ladders. They even stopped for a lunch break.'
Dorset Police said two 38-year-old men had been arrested in connection with the incident in Parkstone, near Poole.
.
TimO said...
Old, weathered brick and wood are so 'in' with designers that there are companies here in the States that will demolish buildings for FREE just to reclaim and resell the materials.....
.
Posted by The Man at 11/29/2008 No comments:

84-year-old woman used cats for warmth in filthy home
The woman living in a filthy house with no heat told a deputy on Thanksgiving that she tried to keep warm at night by getting her 66 cats to lay on her. The woman’s daughter was arrested after officials found her mother living in "deplorable conditions" in the New Smyrna Beach mobile home, Volusia County Sheriff’s Office spokesman Brandon Haught said. Mary Bosket, 54, is being held on a charge of neglect of the elderly and $10,000 bond. Deputies said Mary Phillips was found Thanksgiving morning living with 66 cats, 15 turkeys, 20 ducks, 13 gerbils and a dog. Animal control officers took the animals to the Halifax Humane Society.

The details in the news release about the South Glencoe Road home include:
The only toilet in the house was not working, and the sinks wouldn’t drain.
.
Phillips was using a faulty oxygen tank, and said she suffers from congestive heart problems.
.
A duck was living in one bedroom in an empty children’s pool, while the turkeys were in cages in another bedroom, except one that was wandering freely.
.
Two dead cats were found in the freezer.
.
Baby is born pregnant I Don’t Think So??????
A baby has had a bit of an irregular start to life - she's been born pregnant.
Doctors in Saudi Arabia discovered that when the mother was pregnant she had two foetuses inside her.
But one of the foetuses grew inside the other to create what has been described as a 'unique case in the world'.
.
One-Year-Old Girl is Pregnant
Doctors say this is the first such case in modern medicine: A 1-year-old girl is pregnant.
Immortalized article…
An incredible case was recorded in medical practice. A 1-year-old girl is pregnant, while doctors say this is the first such case in modern medicine. Arab media are now considering if abortion would be considered murder in this case.
It turns out that the girl` mother had two embryos while she was pregnant. One of the embryos started developing in the other child`s uterus. Although doctors declared this a unique case, there are several similar cases throughout history.
An Indian farmer (36) had the embryo of his twin brother removed. The man sought medical assistance after his swollen stomach started causing breathing problems. Doctors thought a tumour was in question, but they retrieved a human embryo.
In 2002, India doctors found a fetus inside a 6-month-old boy. The dead fetus, which was surgically removed, weighed a kilo, while the boy only weighed 6.5 kilos.
This anomaly, called an embryo inside an embryo, is rather rare. It happens once in 500,000 pregnancies. The phenomenon always occurs in the early pregnancy stages. As a rule, the fetuses die while still in the mother`s womb.
However, there are cases where he fetus survives the entire pregnancy, remains in the host`s body, trapped like a parasite.
.
Posted by The Man at 11/29/2008 No comments:

No respectable drunk should not be without one. 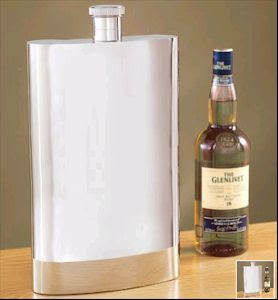 Black Friday Deaths at Wal-Mart and Toys R Us 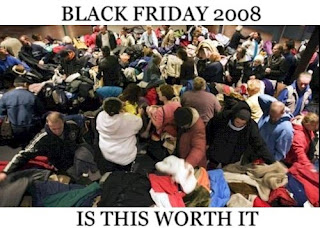 .
Wal-Mart Worker Dies When Shoppers Break Down Doors
Nassau County Police examine the front of the Wal-Mart in Valley Stream, N.Y., after a temporary Wal-Mart worker died after a throng of unruly shoppers broke down the doors and trampled him moments after the Long Island store opened early Friday for day-after-Thanksgiving bargain hunting, police said.
Police said about 2,000 people had gathered outside the doors before the Wal-Mart opened at the suburban location about 20 miles east of Manhattan. A crowd pushed the man to the ground at 5:03 a.m., three minutes after the store opened, leaving a metal portion of the door crumpled like an accordion.
.
Police are looking for Wal-Mart shoppers who trampled worker
New York Police are reviewing video from surveillance cameras in an attempt to identify who trampled to death a Wal-Mart worker after a crowd of post-Thanksgiving shoppers burst through the doors at a suburban store and knocked him down.
Criminal charges were possible, but identifying individual shoppers in Friday's video may prove difficult, said Detective Lt. Michael Fleming, a Nassau County police spokesman.
Other workers were trampled as they tried to rescue the man, and customers stepped over him and became irate when officials said the store was closing because of the death, police and witnesses said.
"This crowd was out of control," Fleming said. He described the scene as "utter chaos," and said the store didn't have enough security.
.
Wal-Mart Stores Inc. in Bentonville, Ark., closed the store in Valley Stream for several hours after the stampede. It reopened shortly after 1 p.m.
.
2 Shot Dead at California Toys R Us
Two men were shot and killed on Black Friday inside a Toys R Us in Palm Desert, Calif., during a confrontation apparently involving dispute over a toy.

Black Friday Fight Over and X-Box
Fighting for a xbox 360 package with the guitar hero, during black Friday at Wal-mart
.
.
Posted by The Man at 11/29/2008 No comments: 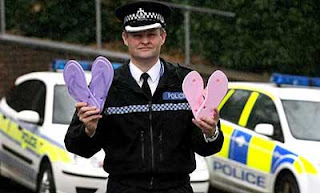 Late night revelers in a Devon resort are being offered flip-flops to help them get home. Police in Torquay say it makes it easier for women, rather than struggling along in high heels. The flip-flops, which will be given out from December, will have messages about safe alcohol limits printed on them. The footwear will be paid for by £30,000 of funding secured from the Home Office by Safer Communities Torbay, an alliance of local authority, police and health services.
The scheme is the latest late-night policing idea in Torbay where "mop cops" order people who urinate in the street to clean up after themselves. Matthew Elliott of the Taxpayers' Alliance said: "This is an idiotic waste of money. People don't pay taxes for drunk women to get free flip-flops, they want police to fight crime. "Police aren't there to be an emergency supply of flat shoes."
.
Posted by The Man at 11/29/2008 No comments:

It appeared to be a real emergency that hit in the middle of the night in Montgomery, New Jersey. It started when an alarm went off in a local bank, sending cops to the scene in a hurry. When they peered inside through the closed blinds, trying to see what might be going on inside the darkened building, they spotted someone inside.
They ordered him out, but he stubbornly refused to move, standing his ground, seeing to almost defy them to take him on.
Specially trained SWAT officers pulled out bullhorns and demanded whoever was inside emerge. And still no one came out.
After numerous phone calls went unanswered, this dramatic robbery in progress took a final turn, as SWAT teams broke through the doors and stormed the bank.
And that's when they finally got their first look at the 'suspect' who caused so much commotion. It was a full-sized cardboard cutout of a person used for promotional purposes, left standing near the window.
Red faced cops quickly withdrew after realizing the cardboard man wasn't likely to do much more than give them a paper cut. But at least he didn't offer any resistance.
But this investigation still isn't over - authorities are trying to figure out what set off the alarm in the first place.
Posted by The Man at 11/29/2008 No comments: