Joan Rivers thrown off TV's Loose Women after swearing
She thought they had bleeping ability, but it's a live show.
.
Posted by The Man at 6/19/2008 No comments:

Mathematicians are perplexed after a highly complex crop circle appeared in a Wiltshire field - depicting a fundamental mathematical symbol. The circle is, apparently, a coded image representing a complex mathematical number — the first ten digits of pi — and even astrophysicists admit they find it "mind-boggling".
The circular pattern was created in a barley field near Barbury Castle, an Iron Age hill fort, earlier this month. Measuring around 46m (150ft) in diameter, it has had crop circle enthusiasts and experts stumped.

Labels: In The News, Using Your Brain 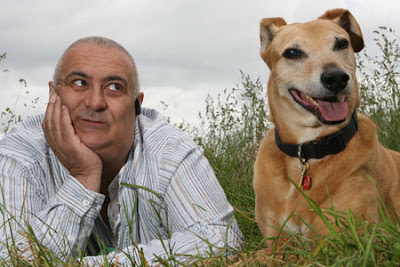 Walks for Chester isn't so much a stroll in the park as a near-disaster waiting to happen.
The lurcher will more than likely get stuck down a rabbit hole, charge into a bench or – if he manages to avoid those – get a paw trapped in the car boot on the way home.
The 12-year-old has had nine operations because of his mishaps, having lost teeth, broken his tailbone and dislocated his shoulder.
Firefighters have even been called to free him after getting trapped.
'It all started on the day we got him,' said owner Jim Cockburn, who got Chester from a rescue home in 2004. 'As soon as I saw him he ran straight at me. I shouted at him to stop but he crashed into me.'
The latest incident involved the careless canine being freed by firefighters when he got a paw stuck in a car boot after chasing his ball.
'Most of the time he'll end up falling down the stairs – he probably does it once a week,' added Mr Cockburn, 50.
'He's like a toddler. 'He'll fall over and cry, so you'll give him a hug to make him feel better only for him to do it again.'
Chester's operations include life-saving surgery after he cut his stomach while jumping over a fence.
Luckily, the Dogs Trust – where Chester came from – help out with the bills because he had pre-existing medical conditions.
Mr Cockburn, from Telford, Shropshire, blames an eyesight problem for the mishaps, while vets have said he suffers from a canine form of Alzheimer's disease.

Bathroom Secrets Of A Cross Country Truck Driver
Posted by The Man at 6/19/2008 No comments: 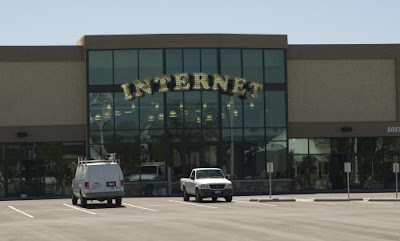 Living Under a Bridge is Nolonger for Transients 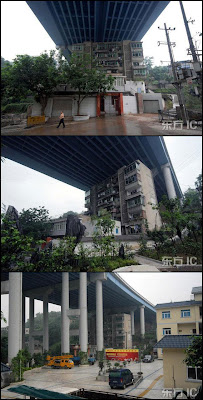 Burger King launches the world's most expensive burger, available at only one location, but who's willing to dish out the cash for the fast food staple with a gourmet twist? 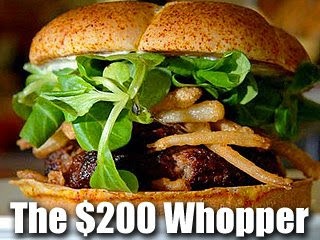 It's known as the home of 'The Whopper' and Burger King is hoping its latest product really lives up to its reputation. The fast-food giant launched a $200 burger Wednesday — all in the name of charity.
The fine ingredients of what is called simply 'The Burger' include Wagyu beef, white truffles, Pata Negra ham slices, Cristal onion straws, Modena balsamic vinegar, lambs lettuce, pink Himalayan rock salt, organic white wine and shallot infused mayonnaise in an Iranian saffron and white truffle dusted bun.

How To Pack For A Trip - NSFW

Nothing can ruin a trip more than over-packing. So who better to show you how to pack than someone who wears close to nothing.

In Moscow it Rains Cement
Russian air force planes dropped a 25-kg (55-lb) sack of cement on a suburban Moscow home last week while seeding clouds to prevent rain from spoiling a holiday.
"A pack of cement used in creating ... good weather in the capital region ... failed to pulverize completely at high altitude and fell on the roof of a house, making a hole about 80-100 cm (2.5-3 ft)," police in Naro-Fominsk told agency RIA-Novosti.
Ahead of major public holidays the Russian Air Force often dispatches up to 12 cargo planes carrying loads of silver iodide, liquid nitrogen and cement powder to seed clouds above Moscow and empty the skies of moisture. Weather specialists said the cement's failure to turn to powder was the first hiccup in 20 years.
.
Man crashes into police gate, asks to be jailed, gets his wish
Authorities say a man drove into a security gate at the Moses Lake police parking lot, then asked to be jailed.
Officers in the building heard the crash, went outside and saw the 54-year-old man backing away in a 1977 Chevrolet pickup truck.
Only the gate was damaged.
The man was arrested for investigation of first-degree malicious mischief, driving under the influence of alcohol and hit-and-run with property damage.
Capt. Dave Ruffin told the Columbia Basin Herald, "He wanted to go to jail. He said he did it on purpose."
.
Woman Arrested For Carrying Cocaine Under Her Wig
OSLO, Norway -- A British woman's bulging wig did not fool customs agents in Norway who realized she wasn't just having a bad hair day. The wig was concealing 2.2 pounds of cocaine glued to her head and customs agents detained her on suspicion of cocaine smuggling, authorities said Wednesday.
The 32-year-old suspect, whose name was withheld, arrived late Sunday at Vaernes airport near the city of Trondheim on a flight from Copenhagen, Denmark, the customs service said.
"The agent thought she had a great deal of hair and suspected that she was wearing a wig," the agency said. "The wig was examined and the agents found a bag of cocaine."
.
Man accused of robbing bank during test drive
Edmonton Police are looking for a man suspected of robbing a bank while test-driving a truck.At around 10 a.m. Tuesday, a man approached a downtown car dealership and asked to take a used truck for a test drive, police said. The car salesman accompanied the suspect, who stopped at a bank near 111th Avenue and Groat Road and said he wanted to withdraw cash to pay for the vehicle.While the salesman waited in the car, the suspect slipped a note to a bank teller demanding cash, police said. He got the cash then drove away with the salesman, saying he wanted to show the truck to a friend before buying it.
When the suspect stopped and got out at a gas station near the Lakeland Trailer Park, the concerned salesman took the truck's keys and called 911. Police said the suspect then realized he was under suspicion and ran away. Police are looking for 40-year-old Marcel Perrot, described as Metis, six-foot-one and 230 pounds. He has brown hair and brown eyes.
.
Burglars break into elderly widows' home - and introduce themselves
Two burglars broke into an elderly widow's home - and introduced themselves. "We are Marc and Francois. We're friendly burglars and we won't assault you," they said after breaking into Simone Delapierre's villa in Belgium. The pair pocketed jewelry and £200 - and advised her not to leave her windows open. They then gave Simone, 82, a hug and a kiss on the cheek and waved goodbye.
.
Posted by The Man at 6/19/2008 No comments: