He didn’t see that coming

The bully sitting behind you been flicking your ear all year?
Get the bigger guy next to you to unwittingly handle it for you.
.
.
Posted by The Man at 6/09/2009 2 comments:

Dogwalker Dragged Into Oncoming Train
"A woman was struck and killed by a Capital Corridor train in Hayward when the dog she was walking dragged her onto the tracks and into the path of the oncoming locomotive, according to authorities... Nelson said the woman, in her early-to-mid 30s, was unable to simply let the dog go because of how she had the leash wrapped around her hand."
.
Child who wouldn't buckle up is sent to traffic class
A New Mexico five-year-old sentenced to traffic safety class after refusing to wear a seatbelt says he is reformed.
David Kirk-Peet completed the class Thursday and was handed a certificate.
He promised to buckle up, saying: "You want to get safe."
Magistrate Buddy Sanchez sentenced David and his mother to the class after an officer spotted the boy unbuckling his seatbelt earlier this year.
His mother received a ticket for failing to restrain him.
She asked the officer to speak to David about the importance of seatbelts because he constantly unbuckled.
The ticket landed her in Sanchez's courtroom, where she explained the problem.
.
Driver's sneeze turns into head-on crash
Five people were taken to hospital Saturday after a sneeze resulted in a head-on crash on Hwy. 307 at Cantley.
The crash occurred at about 2:15 p.m. MRC des Collines police said the driver of a car sneezed, veered into oncoming traffic and collided with a pickup truck.
The driver, his female passenger and an infant, as well as the couple in the pickup truck, were all taken to hospital. None of their injuries are considered serious.
.
Dog playing fetch brings back hand grenade
A dog playing fetch in Germany brought its owner a live U.S. hand grenade from the Second World War.
Police in the western town of Erkrath said Monday they were called by the dog's 40-year-old owner who stopped walking her pooch when she recognized the "rusty" object it was carrying was a weapon.
Police summoned a munitions expert Sunday to identify and defuse the grenade.
Grenades and bombs left over from the war are still often found in Germany.
Sometimes whole streets in neighborhoods are evacuated so that such devices can be safely defused.
.
Ambulance taken on joyride
A 29-year-old St. Albert man is facing a handful of charges after allegedly stealing an ambulance in Edmonton and taking it for a wild ride to Jasper.
Cops said a man swiped the emergency vehicle while paramedics were responding to a call near 101 Avenue and 113 Street around 6 p.m. Sunday.
Shortly after, with the help of the ambulance's on-board global positioning system, Edmonton cops caught up with the ambulance near 151 Street and Yellowhead Trail.
During the pursuit that ensued on Highway 16, police said they tried several methods -- including deploying spike belts and talking to the man on the ambulance's radio -- to get him to pull over.
None worked.
Sometimes, police say, the man appeared to deliberately try to ram police vehicles, forcing officers to take evasive action.
Shortly after sunset, at about 10 p.m., the ambulance hit a spike belt just east of Jasper, disabling it and prompting the driver to take off on foot.
He was arrested not far from the ambulance, nearly 400 km from where the incident began.
RCMP have not yet laid charges but said they are pending.
.
Posted by The Man at 6/09/2009 No comments: 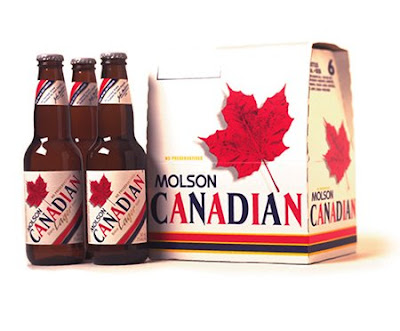 Some 2,400 retirees from Canada's Molson brewery are angry with the company's decision to phase out their free monthly beer allotments.
Retirees in Vancouver, Montreal and St. John's, Newfoundland, received a letter saying the company intended to standardize its perks across the country to current and past employees.
After Jan. 1, current Newfoundland workers' allotment will fall from 72 dozen bottles or cans a year to 52 dozen, the company said. Retirees' free beer will fall from six dozen bottles a month to one dozen and will be phased out in five years, the report said. In Vancouver and Montreal, unions have filed grievances against the company, which said the free beer costs about $1 million per year, the Star said.
St. John's retiree Bill Bavis, who worked for Molson for 32 years, told the Star he found the cutback announcement unfair.
"I think with the economic downturn they're trying to take advantage of us, as a way to cut retirees' benefits and justify it," he said.
In April, parent company Molson Coors announced its net profit more than doubled in the first quarter compared to last year, to $75.7 million.
.
Posted by The Man at 6/09/2009 No comments:

Where would you take a $100,000 check that is also a suicide note - to the cops or to the bank?
John Francis Beech had counted down the days on a calendar in his garage, crossing out each day leading to the final day, on which he'd scrawled the word "OUT." But first he had one last bit of business, one final appointment to keep.
Beech, a 53-year-old retired Coors manager, drove to Laradon Hall in north Denver. He'd called a few days earlier to arrange a meeting with Annie Green, the acting director of Laradon, a nonprofit that operates an alternative school and other programs for people with developmental disabilities. Beech had never met Green, but he explained on the phone that he was planning to leave his entire estate to Laradon. He was a member of a local Elks club, he added, which had adopted Laradon as its primary charity.
Green readily agreed to see him. But then she was unexpectedly called away by a death in her family. Although she tried to cancel all her appointments, Beech showed up on July 17 anyway. He handed a large white envelope to the receptionist and asked that it be delivered to Green.
Laradon's director found the envelope in her mailbox when she returned to work four days later. On the back, in handwritten block letters, were six words: WAIT UNTIL YOU HEAR FROM CORONER. And below that, in parentheses: PLEASE DON’T CALL EVERYTHING IS OK.
Despite the plea to wait, Green opened the envelope. Inside was the original of Beech's Last Will and Testament, which left all his worldly goods to Laradon Hall.
The envelope contained keys to Beech's house in Lakewood and instructions about selling the house and its contents, closing his bank account and collecting funds owed to him by a bail bondsman and others. There was also a check made out to Laradon for $100,000 and dated August 1 — two weeks after the day Beech delivered the documents.
Having ignored the first message on the envelope, Green disregarded the second, too. She would later claim to have left voice-mail messages for Beech twice over the next two days, to thank him for his startling generosity — and to see if everything was indeed okay. But Beech didn't call back, and Green apparently made no further efforts to contact him.
The postdated check went into a safe at Laradon.
On August 1, the day the check became negotiable, Lakewood police officers entered Beech's house, not far from the Bear Creek Golf Course. They'd been summoned there by a neighbor, who'd complained of the smell of death seeping from the property.
Taped to Beech's front door was a handwritten note: COME BACK ON THE 1ST THANKS. Inside, taped to a hallway wall, was another note, affixed like a warning sign: STOP CALL THE CORONER THANKS.
Beech's body was inside a white van parked at the far edge of the back yard. He'd rigged up a hosefrom the exhaust and tried to shield the apparatus from neighbors' view with a blue tarp. He'd left his wallet, keys, car titles, a copy of the will and other documents neatly arranged on a kitchen table. It was a very polite suicide, designed to do minimal damage to the value of his house and possessions and generate the least fuss possible. But there was no note explaining why.
.
Posted by The Man at 6/09/2009 No comments:

A man smashes a car by hands