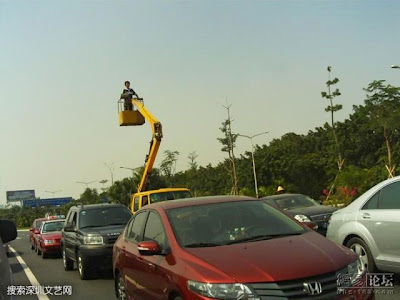 57-Year-Old Pleads Guilty To Unlawful Photography, Other Charge
A man in Murfreesboro, Tenn., was sentenced to two years of probation for sending sexually explicit Christmas cards of his ex-girlfriend to her relatives.
57-year-old David Simmons was accused of surreptitiously taking pictures of his ex-girlfriend while she performed sexual acts on him. After a bad break up, Simmons sent one of the pictures to the woman's relatives as Christmas cards.
He pleaded guilty Wednesday to charges of unlawful photography and criminal impersonation. In exchange for the plea he was given a suspended sentence.
.
Posted by The Man at 10/31/2009 No comments:

Jungle woman wants to return to the wild 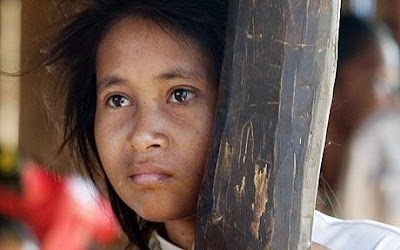 A Cambodian woman who spent 18 years living in a forest after going missing as a child has struggled to reintegrate in village life and wants to return to the wild.
Rochom P'ngieng, dubbed "jungle woman" when she emerged in Feb 2007, has still has not learnt to speak and refuses to wear clothes.
Her father said she had been admitted to hospital after refusing to eat for a month and had made several attempts to return to the forest.
Sal Lou said: "Her condition looks worse than the time we brought her from the jungle. She always wants to take off her clothes and crawl back to the jungle.
"She has refused to eat rice for about one month. She is skinny now... She still cannot speak. She acts totally like a monkey. Last night, she took off her clothes, and went to hide in the bathroom."
Rochom P'ngieng disappeared in 1989 when she was eight years old while herding water buffalo in the province of Ratanakkiri bordering Vietnam, north-east of the capital, Phnom Penh.
Her parents had long given up hope of ever seeing her. But in 2007, she emerged from the jungle naked and dirty, hunched over like a monkey, and was caught trying to steal by a farmer.
She was said to have been scavenging food in the forest and could utter only unintelligible words. Sal Lou described the sounds she made simply as "animal noises".
The drama of her disappearance and unlikely reappearance gripped Cambodians who described her as "half animal girl" and "jungle woman", though there were also many questions raised about her identity and whether she could really have survived in the jungle.
.
Posted by The Man at 10/31/2009 1 comment:

Pepsi Cola was ordered to pay more than $1 billion to two Waukesha County men who accused the company of stealing their idea to bottle and sell purified water.
The company didn't show up in court, so a Wisconsin judge ordered Pepsi to pay Charles Joyce and James Voigt more than $1.2 billion in a default judgment.
According to an article in the National Law Journal, "The men sued the soft drink maker and two of its distributors, alleging they had misappropriated trade secrets from confidential discussions the plaintiffs had with the distributors in 1981 about selling purified water."
The article said, "PepsiCo argues that the statute of limitations should preclude the lawsuit, brought 15 years after the company started selling Aquafina and more than two decades after the alleged confidential talks."
The company is appealing the decision; saying is wasn't aware of the lawsuit until after the decision was handed down earlier this month.
.
Posted by The Man at 10/31/2009 1 comment:

Gangs of drivers in Sofia are defying death for bets of up to £5,000 by speeding through red lights at 120mph.
A new game, known as "Russian road roulette", is played every night at intersections throughout the Bulgarian capital.
As many as five people have been killed and many injured since the craze took hold in the summer. According to the rules, participants must drive at top speed and not apply their brakes.
The 50 or so drivers, most of them in their twenties and driving sports utility vehicles, gather at midnight at designated meeting points in the north of the city.
While lookouts watch for the police, the participants decide on the venue for the night. Other gang members are informed via texts and the gambling starts.
To win at Russian road roulette, the driver must jump red lights at busy crossroads at full speed and not collide with another vehicle, pedestrian or leave the road. If he hits an object, he loses the bet. Onlookers also take part by gambling on the outcome.
In a variation of the game, drivers approach roundabouts at high speed and go around the wrong way. Rivals also race each other along the dual carriageway of the city's ring road. On some occasions the gangs have even blocked sections of the highway to other traffic while the race takes place.
Rumen Georgiev, a taxi driver, said he was now afraid to be on the city's roads after dark. "I – like every other taxi driver in Sofia – stop at a green light to make sure nothing is coming the other way," he said. "I have to apologize to clients for the slow journey. It's a jungle out there."
.
In The Streets Of Sofia Bulgaria
..
Posted by The Man at 10/31/2009 No comments: