Before they were boob jobs...liquidgeneration.com

OUCH - When You Mess With a Bull, You Get the Horns (EJB)

Deputies Searching For Man That Led Them To Meth Lab House

Man To Get Lottery Prize Years After Win

Rookie Officer Arrested For DUI After Crash In Palm Bay

More than 3 Dozen Deputies In Court As Suspect Goes On Trial
.
Dog Chews Off Owner's Toes
Posted by The Man at 2/01/2008 No comments:

Labels: In The News, Interesting

What Shall I Wear?

Use your own picture to make a funny face

A BABY BOBCAT USES THE TOILET

Someone's pet bobcat named "Sir Squats A Lot" was recently caught on camera using a human toilet. The bobcat reportedly didn't even flush and used up all the toilet paper and didn't replace it. His owners are apparently going to shit in their yard for a week as retaliation for this heinous crime. One has to wonder if this event will finally trigger the much anticipated Planet Bobcat vs Planet Earth war we've all been waiting for.

The Torch: the world’s most powerful flashlight

Here is The Torch, a perfect name for the world’s most powerful flashlight. The Torch is also the world’s brightest flashlight, emitting a beam of light incredible enough to start fires, melt plastic, and even cook food. Yeah, that’s what 4100 lumens can do. 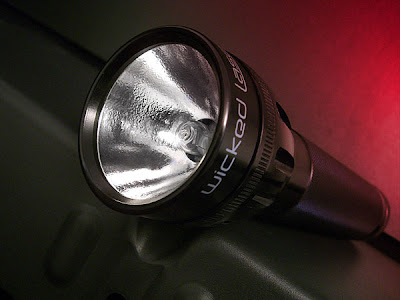 I AM NOT EXAGGERATING. This flashlight really can do all that.
.
Starting a Fire

For those who are not familiar, Planet Earth is the Emmy-award winning TV documentary from the BBC which features breathtaking views of Earth and its inhabitants.
I seriously couldn’t stop laughing at this video by Max Goldberg.
NSFW because of one little F word… used repeatedly.
.
It's like we can finally understand what these animals are saying.
Posted by The Man at 2/01/2008 No comments:

Driver Forgets Headlights, Remembers Pot
Attention, dumb criminal: If you're driving at night with a couple hundred pounds of pot in tow, turn on your headlights.
A Texas man was busted in Franklin Park Tuesday night hauling about $500,000 of "high-grade" marijuana in a rental truck after he didn't have his lights on, police said.
Click Here To Read More

15-year old filmed herself trying to kill her parents
A schoolgirl accused of filming herself attempting to murder her parents claimed a voice inside her head insisted that she kill them. The 15-year-old, who videoed herself putting a noose around her mother's neck and trying to stab her father with scissors, said she never intended to hurt her parents. She told a jury she pretended to carry out the voice's instructions in the hope it would go away for long enough for her to get psychiatric help. The teenager looked pale but remained calm and thoughtful as she answered questions at Cambridge Crown Court from Alastair Malcolm, QC, who is defending her. » Full article here

Urinating Suspect Tries To Dive Through Car Window To Escape Police
ORLANDO, Fla. -- Orlando police arrested a man after a confrontation at a convenience store.
Officers said they noticed a man urinating outside a 7-Eleven on Orange Blossom Trail. Officers said Andre Handison put up a fight and tried to make his getaway by diving head first through the window of his car.
He missed, and smashed his face on the side of the car. He needed some medical attention before a trip to the jail.
Images: Man Tries To Dive Through Car Window After Deputy Sees Him Urinating On 7-11

Hydrogen Peroxide Enema
Vistiors at a Russian health resort have received a rude shock, with a nurse providing chemical enemas. The confused carer used hydrogen peroxide instead of water to give the unfortunate guests an unexpectedly thorough flush. Local news says 17 tourists in the Caucasus spa town of Yessentuki had to be treated in hospital after the mix-up. Hydrogen peroxide is better known as disinfectant but ingestion, from either end, is generally discouraged. Sources at the sanatorium say the mistake was explained by water and hydrogen peroxide looking the same.
Posted by The Man at 2/01/2008 No comments: