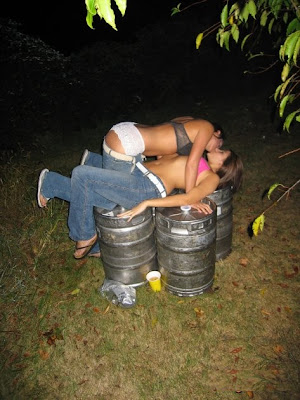 Personally I think the ground would be a better place to get it on. 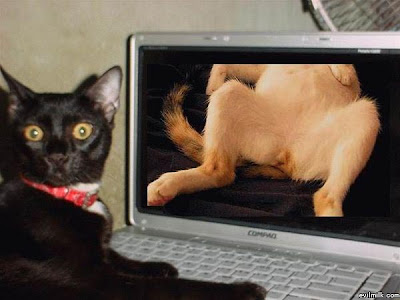 It taste better then Subway too. 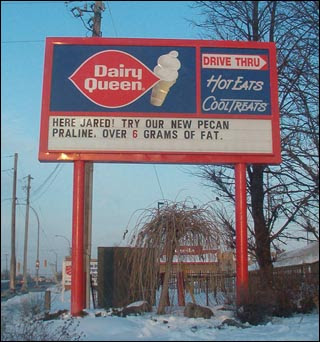 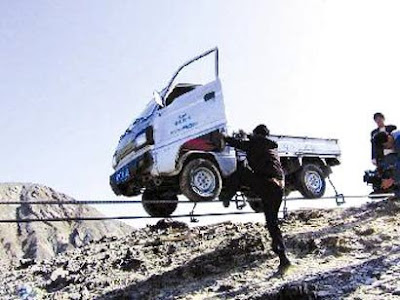 A Chinese man has driven his pick-up truck more than 200 meters on two steel cables 20 meters high.
It took Liu Suozhu of Korla city, Xinjiang, 15 minutes to drive from one hill to another on the twin tightrope wires.
"I just wanted to do something special," he told the Tianshan Network.
As a safety precaution, the four corners of the truck were attached by four thinner cables to the two main cables.
Posted by The Man at 10/25/2007 No comments:

Man was sentenced Tuesday to 30 days in jail after prosecutors say the man shot his dog and left it to die a slow death.
But Judge Ciconnetti says 37-year-old Robert Clark of Madison Township can be excused of 20 of those 30 days if he dresses as "Safety Pup" and visits Painesville Elementary School supervised by either a police officer of the Lake County dog warden. 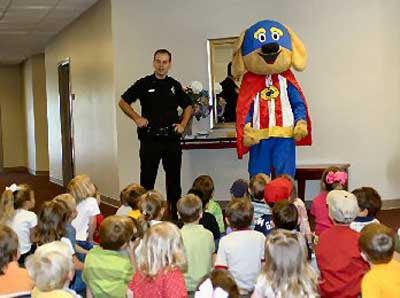 Clark has reportedly agreed to the alternative sentence of dressing in the costume. Last summer, police say they found Clark's dog, a harlequin Great Dane named Bill, bleeding from the head, hidden behind a shed and tied to a fence.

The dog had to be put down because its injuries were so severe.

.
Despite his claim he shot the dog because it was aggressive, Clark was found guilty last November and was given the same sentence, which he appealed.
But earlier this month, an appeals court upheld Judge Cicconett's original sentence which was then re-imposed on Clark. In addition to the time spent in the "Safety Pup" costume, the judge ordered Clark to never possess any wild or domestic animal again.
Posted by The Man at 10/25/2007 No comments: 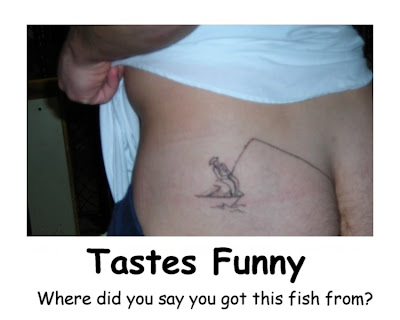 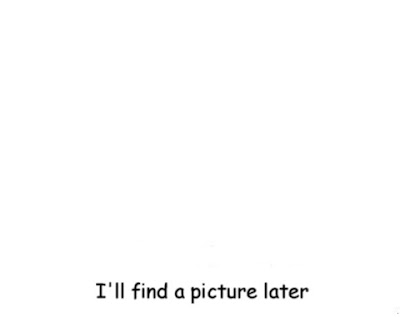 I be Damn if I can figure this one out. 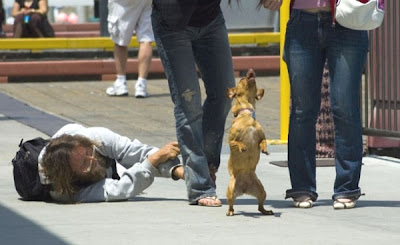 Friendship between women: A woman doesn't come home one night. The next day she tells her husband that she had slept over at a girlfriend's house. The husband calls his wife's 10 best friends. None of them know anything about it.

Friendship between men: A man doesn't come home one night. The next day he tells his wife that he had slept over at a friend's house. The wife calls her husband's 10 best men friends. Eight of them confirm that he had slept over, and two claim that he was still there.
Posted by The Man at 10/25/2007 2 comments:

Man fined for helping old lady
A man who assisted an elderly woman on Monday after train doors closed on her was "thanked" by the conductor with a 60-euro fine."I apparently could have caused a delay and that is not permitted," said Daniël Dewulf from Ostend. Dewulf managed to get on the Bruges-bound train just before the conductor's whistle. "Then I noticed that an elderly woman had tried to get on after me. The doors had closed on her, trapping her. In order to prevent a tragedy pushed the door open and helped her get in. She thanked me profusely."The conductor was less enthusiastic. "He gave me a fine because my actions increased the chance of a delay," Dewulf explained. "The train arrived right on time in Bruges in any event. The conductor did not see my point that I may have saved the woman's life as a mitigating circumstance. Result: 60-euro fine."The Belgian Railways has since admitted that Dewulf should not be blamed and that he did help to prevent a worse accident. He will not have to pay the fine in the end. "We also offer our apologies. We should have in fact fined the woman in question for boarding the train after the whistle."

Barmaid fined over crushing beer cans between breasts
Showing patrons she could crush beer cans between her exposed breasts has cost a West Australian barmaid $1000. Hanging spoons on the barmaid's nipples also cost one of her co-workers $500, while their bar manager was fined $1000 for failing to stop the pair, police said in a statement. Luana De Faveri, 31, was fined $1000 in the Mandurah Magistrates Court today after pleading guilty to two breaches of Licence Conditions under the Liquor Control Act. Police said in June this year, De Faveri twice exposed her breasts to patrons in the Premier Hotel in Pinjarra, 87km south of Perth. "She was alleged to have also crushed beer cans between her breasts during one of the offences," police said.

Man talking to his wife was killed in his car vs. train crash
A man was on his cell phone with his wife when he crashed into a freight train on Tuesday, according to the Texas Department of Public Safety. Investigators said they are unsure whether Santiago Cadena, 33, was trying to beat the train or didn't see it coming before the crash happened around 2:30 p.m. Cadena's wife told authorities that she overheard the wrenching, screeching crash, said DPS Sgt. Chuck Havard. Cadena was pronounced dead at the scene, authorities said. Because of its weight and power, Havard said, the train was not damaged. None of its cargo spilled and no one else was injured, he said. » Article here

Babysitter falls asleep, kid rides bike through on-coming traffic
A baby sitter was arrested Monday after police said they found a 3-year-old boy in his care riding a bicycle more than a mile from his home in the middle of traffic.
Douglas Wayne Brown, 27, was sleeping around 10 a.m. when the boy was riding through on-coming traffic. Witnesses said the boy was nearly struck several times while pedaling on North Tennessee Boulevard. "The child was on the street going in and out of traffic and being chased on foot by a female attempting to get him to stop," Officer David Blackwell reported. » Article here
Posted by The Man at 10/25/2007 No comments: