I’m sure am a Stupid-Son-Of-A-Bitch for doing this.

Remember when you were a kid and your parents told you not play with fire?
Apparently, this guy never got the message.
This genius uses gasoline to spit fire to impress his friends.
As you can expect, it don’t go as planned.
.
.
Posted by The Man at 4/20/2009 2 comments: 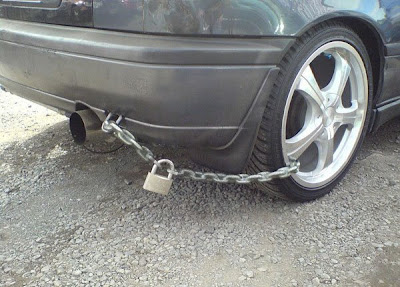 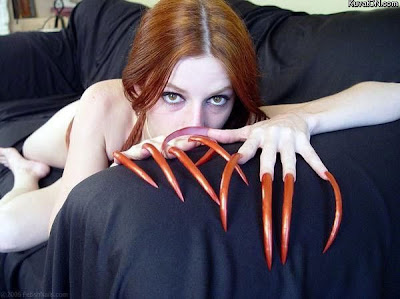 Getting Stuck with Freeloader

A Spokane Washington man built a new garage beside his home to work on old cars.
Now a stranger is living there, rent-free, and he can't legally kick her out.
.
.
Posted by The Man at 4/20/2009 2 comments: 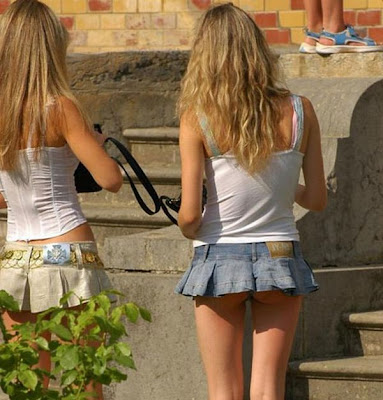 Koreans predict shorter skirts this summer
South Korean fashion mavens said miniskirts in the country are likely to shrink to no longer than 9.8 inches long during the coming summer season.
Chung Il-chae, chief merchandiser for Shinsegae Department Store, said skirt length is tied to the state of the global economy, The Korea Times reported Friday.
"Women's skirts are going to get shorter as the economy continues its downswing cycle," Chung said.
He said the trend in women's fashion will likely not stop with miniskirts.
"Everything is going to shrink," he said.
Kim Sun-ae, a shop manager at Lotte Department Store, said the coming of shorter skirts is likely to increase the sales of shoes with heels more than 4 inches high.
"Don't think about lowering those heels," Kim said. "There's nothing that complements a miniskirt better than a pair of power heels."
.
More Drugs Found During Strip Search
A Thursday afternoon traffic stop resulted in the immediate discovery of one baggie of suspected drugs, and the eventual discovery of a second baggie.
According to a Lincoln police report, officers stopped a car that ran a stop sign at 17th and Y streets. When the front passenger door was opened, a bag that pretested positive for cocaine salts fell onto the ground.
Neither the passenger, Michael Dale Riley, 29, of Kansas City, Mo., or the driver claimed ownership of the bag, which weighed 3.2 grams, according to the report.
Riley was jailed Thursday and charged Friday in Lancaster County Court with possession of a controlled substance.
Before he made his initial appearance, Riley was searched at the jail, where corrections officers found a baggie containing a white powdery substance in his rectum. According to the report, Riley quickly grabbed the baggie and tried to chew it. Officers retrieved the evidence before Riley could eat it.
.
Texas elementary school gets noise citation
A fed-up San Antonio Texas homeowner has managed to get a noise citation issued against his neighbor - an elementary school.
Police in suburban Universal City say they had to issue the citation after Butch Armstrong complained about the noise coming from Olympia Elementary School during the school's Family Fitness Day on March 20.
Principal Terri LeBleu says the school has already built a fence, removed loudspeakers and installed noise-reducing backing on basketball goals in response to Armstrong's previous complaints.
According to a police report, Armstrong told an officer that "police, fire, ambulances and the (air force) training jets are not unreasonable, but the noise coming from the elementary school was."
.
Bogus waiter tricks customers at 2 NJ restaurants
Police say a man posing as a waiter collected $186 in cash from diners at two restaurants in Hoboken New Jersey and walked out with the money in his pocket.
Diners described the bogus waiter as a spikey-haired 20-something wearing a dark blue or black button-down shirt, yellow tie and khaki pants.
Police say he approached two women dining at Hobson's Choice in Hoboken, N.J. around 7:20 p.m. on Thursday. He asked if they needed anything else before paying. They said no and handed him $90 in cash.
About two hours later he approached three women dining at Margherita's Pizza and Cafe. He asked if they were ready to pay, took $96 and never returned with their change.
.
Posted by The Man at 4/20/2009 2 comments: