A business man got on an elevator.

When he entered, there was a blonde already inside who greeted him with a bright, "T-G-I-F."

The blonde was trying to keep it friendly, so, she smiled her biggest smile and said as sweetly as possibly, "T-G-I-F." 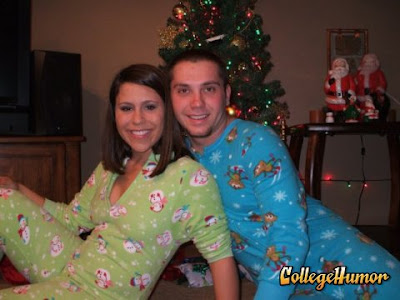 Look His and Her Jammies
Wonder if they have feet? 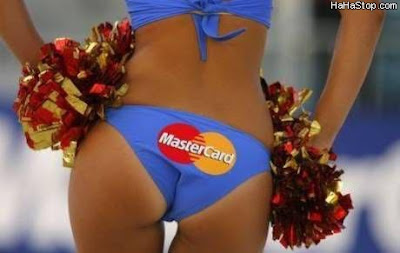 Dog can take care of himself and take out the trash

“Ronin” the 5-year-old bull-mastiff is gentle, affectionate, and obedient and he doesn't need a human being to take him for a walk. "From the first moment he came to the house he showed us things that we'd never seen before."
.
Posted by The Man at 4/12/2008 No comments:

Burglar Caught By His Walk

A burglar from Bolton was caught by police when his distinctive walk, captured on CCTV, was identified by a podiatrist.
.
Posted by The Man at 4/12/2008 No comments: 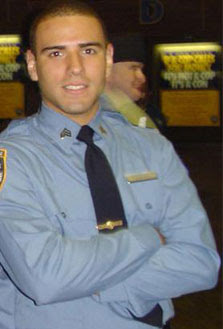 A rookie NYPD cop was busted yesterday for an armed bank robbery in Pennsylvania, authorities said.

Christian Torres, 21, a transit officer who lives in Queens, waited outside a Sovereign Bank branch in Muhlenberg Township shortly after 8 a.m., police said.

Torres, who had traded his NYPD uniform for a black suit with a button-down shirt, approached a teller as she arrived for work, police said.

He asked her a question about mortgage rates, but was told to wait until the branch opened.

When another female employee, who had arrived earlier, opened the door from the inside, Torres pulled a gun, forced his way in and demanded the two women take him to the vault, according to court papers.

He allegedly ordered them to take out bills in $20, $50 and $100 denominations and stuff them into a white shopping bag he was carrying.

How A Crazy Man Catches Turtles

Ernie Brown, Jr. is from Kentucky and he is known as the Turtle Man because he catches snapping turtles with his bare hands! Snapping turtles can pretty much chomp your fingers off, so I’m quite surprised that this man has been doing what he loves for so long and still maintain 5 digits on each hand.
.
Posted by The Man at 4/12/2008 No comments:

Spasticville, Kan., seeks name change
SPASTICVILLE, Kan., The city administrator of Spasticville, Kan., said he has applied to the U.S. Geological Survey to have the city's name changed to Trails End. The administrator said he collected the proper amount of signatures and sent them in with the accompanying forms to apply for the name change, KWCH-TV, Wichita, Kan., reported Thursday. He said it could be months before researchers analyze the proposal and send it to the U.S. Board on Geographic Names for a decision. Residents of the Sedgwick County town said accounts vary on how Spasticville got its name, but some theorize it was named for a home for the mentally handicapped that used to be located in the area.
.
Robbery Suspect Arrested For Not Buying Ticket
LINTHICUM, Md. (AP) ― For a fugitive riding public transportation, it didn't pay to be cheap.
A North Carolina bank robbery suspect is in custody after he was caught taking a free ride on Baltimore's light rail.
A ticket on the train costs $1.60. But the Maryland Transit Administration says 58-year-old Isaac Ray Dunn didn't have one when an MTA police officer asked passengers to show their tickets. After arresting Dunn for failing to buy a ticket, police did a check for outstanding warrants and found out he's wanted for a bank robbery in Charlotte, N.C.
.
LI Man Accused Of Passing Phony Money -- For Bail
MELVILLE, N.Y. (AP) ― Police say it was no surprise a bogus $50 bill got a Long Island man arrested—he was trying to use it to pay his bail on a traffic charge. The transaction compounded Cyheam Forney's legal problems and landed him in jail.
Police say they spotted the 31-year-old Forney making an illegal left turn in Melville Thursday and soon discovered his license had been suspended. Forney was arrested on a misdemeanor suspended license charge—until officers said he proffered the counterfeit currency as bail money. He was being held early Friday on a felony charge of possessing a forged instrument.
.
Newborn boys sent home with wrong families
MARION, Ill. --- A federal agency is investigating the case of a baby apparently sent home with the wrong family from Heartland Regional Medical Center in Marion.
The switching incident involved two newborn boys from two families. One baby was said to have been discharged with a family a day after delivery in late March. Hospital personnel soon learned of the error and contacted the family immediately. Names of the families have not been reported.
Melaney Arnold, media spokeswoman with Illinois Department of Public Health in Springfield, said the hospital was not required to report the incident to the agency, but did so April 4.
Arnold said her department has now been asked to investigate the switching incident on behalf of the Centers for Medicare and Medicaid Services, which falls under the umbrella of the U.S. Department of Health and Human Services.
Arnold said she could not divulge any further details because an investigation is ongoing.
.
Bulgarian farmer swaps wife for goat
A Luckless Bulgarian farmer who was been married three times has decided to try his hand at marriage one last time - with a goat. Stoil Panayotov exchanged his third wife with Elena the eight-year-old goat at a livestock market in March - because she couldn't provide him with a child.
The extraordinary deal was concluded in front of a stunned crowd in the market town of Plovdiv, central Bulgaria. "The day before a friend told me that he has had no luck with women and that he really liked my wife," says the 54-year-old. "The deal was reached when my wife gave her approval." The goat has given birth to three kids and my wife to none. "So this deal was more profitable to the goat owner, I got a second-hand goat and he got a brand new wife."
Posted by The Man at 4/12/2008 No comments: