Would you be seen dead in this? 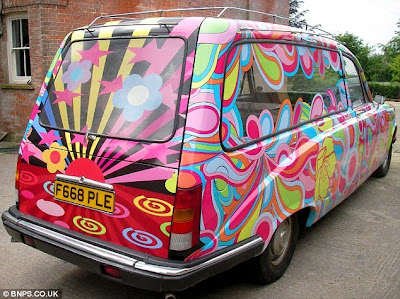 Psychedelic hearse
A businessman has given a hearse a psychedelic makeover in his bid to beat the recession.
Matthew Shuter told how he bought the 1989 Daimler after spotting a gap in the market for funky funerals.
He said: 'The Woodstock generation is now dying out. They really lived a colorful life - they wouldn't want to go to their funeral in a boring black hearse.
'It's a recession proof business opportunity for funky funerals.'
Mr Shuter, 54, from Somerset, now plans to auction the vehicle on eBay, at a reserve of £5,000 - and he claims people are already starting to show interest.
PICTURE
.
Posted by The Man at 10/19/2009 No comments: 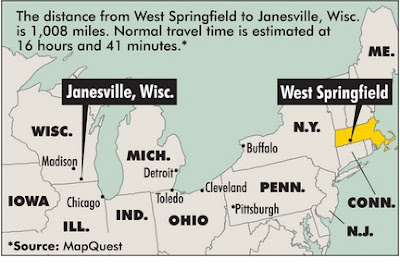 It started out Thursday afternoon as a routine auto test drive from a West Springfield dealer, evolved into car theft and kidnapping along the Massachusetts Turnpike, and ended some 15 hours later and more than 1,000 miles away with a traffic stop in Janesville, Wisc.
Aleh Kot, 32, of West Springfield, was being held Friday in the Rock County Jail on charges of speeding, reckless driving and driving a vehicle without the owner’s permission. But that only tells part of the story. 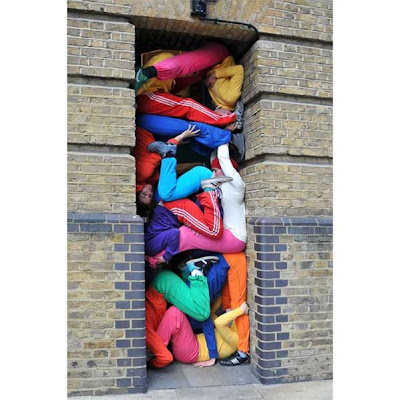 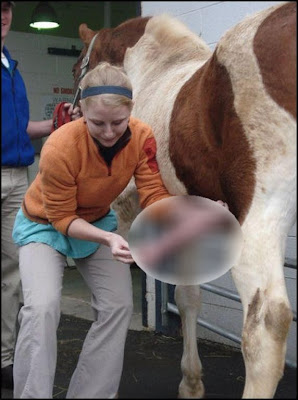 Visitor charged with touching a sleeping student
A girl awoke before 6 a.m. in her room at the Beta Hall dorms to find Daniel Boliek, 18, in his boxer shorts, touching her roommate's face, said Lt. Meg Ross, a police spokeswoman.
The 5-foot-11, 223-pound Coral Springs resident, who is not a student, ran into the second-floor hallway, and the girl locked her door.
From the peephole, she saw Boliek take off his underwear and use his fingers to make a shooting motion at a female resident assistant.
The resident assistant called campus police. Officer Brinton George approached Boliek in the hallway and got "sucker punched" in the face, Ross said. The cop pepper-sprayed Boliek, but it had no effect.
Next, Boliek began fondling himself, Ross said. Then he bolted out of the dorms and several officers caught him outside and tackled him. Ross said Boliek was a guest of a male student who lives in the dorm.
.
No Bond for Man Who Shot Daughter’s Boyfriend
An Apopka Florida man accused of shooting a teen that he caught having sex with his stepdaughter will not be allowed to bond out of jail. Wade Edwards is facing second-degree attempted murder charges after he caught the couple in the act.
The family of 18-year-old Julian Harp knows he's lucky to be alive.
“He could have told him to get out of his house instead of shooting him,” Harp’s brother Dmeric Collier said.
Thursday night, Wade Edwards arrived home to an unpleasant surprise. His 16-year-old stepdaughter daughter and Harp were having sex inside the family's Apopka home.
According to a police report, Edwards walked in on the two having sex. He left the girl's bedroom and Harp quickly threw on his clothes fearing something bad might happen.
Edwards walked into the room again, this time armed with .45-caliber handgun. Harp asked Edwards not to shoot, but police said he fired four times as he left the house.
Sex between a 16-year-old and an 18-year-old is legal in the state of Florida.
By law, an adult under 24 can legally have sex with a minor no younger than 16. That law is called the “close in age exemption."
.
Man pepper-sprayed mother-in-law
Police in Juelsminde, Denmark said a man was so upset with his mother-in-law for refusing to leave that he squirt a can of pepper spray in her face.
Investigators said the 20-year-old Juelsminde man kicked his mother-in-law out of a party at his home Thursday and became angry when the woman returned, the Copenhagen Post reported Friday.
The man grabbed a canister of pepper spray and emptied it in the woman's face, police said. They said the he likely will face charges of violence and possessing an illegal weapon.
.
Woman seeks divorce over nickname
A Saudi woman is seeking a divorce after discovering her husband had nicknamed her 'Guantanamo' on his mobile phone.
The woman made the discovery while examining the list of contacts in her husband's phone when he left it at home one day, the Al-Watan newspaper reports.
The Riyadh newspaper did not name the woman or her husband, who may live to regret comparing life with his wife with the US detention centre in Cuba. His wife has since decided to end their 17-year marriage and is seeking a divorce.
But the newspaper suggested she might settle for "substantial" financial compensation from her husband and stay married to him.
.
Store For Druggies
Investigators in Jacksonville, Florida Says Emporium Sold Them 800 Ecstasy Pills.
Sharri Banks styles hair in her salon just a few doors down from Kudah's Ethnic Emporium on Lane Avenue, but she's never known what it sold.
Police said what Maria Richardson was selling out of her own store was more than weird -- it was illegal.
They said Richardson, who was arrested on drug charges, sold them 800 Ecstasy pills in June, and when they came in this week to bust her, they said that her store was like a "Wal-Mart for drug dealers."
Inside the store, investigators said they found a lot of things that appear normal from the outside. For instance, an ordinary soda can may have had drugs hidden inside it.
Police said they found a lot of scales used to weigh drugs, but they look like CD cases, matchbooks and iPods.
They said they also found crack pipes and the tools and mixing agents that dealers use to cut cocaine to get it ready for resale, and they said the store even sold the little baggies.
"I'm shocked," Banks said. It is even more upsetting is that the business is right next door to a day care.
Investigators said it's very possible children went into the store because the store also sold candy, soda and ice cream right next to crack pipes.
.
Posted by The Man at 10/19/2009 No comments: