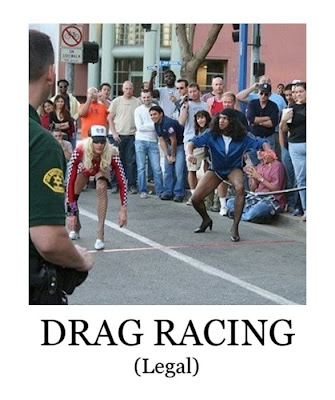 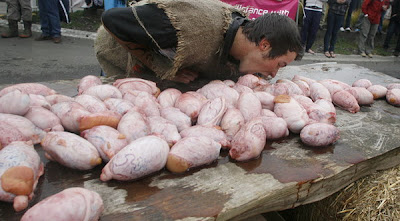 Contestant Anthony Bell bites into a bull's testicle with his mouth at the Hunterville Huntaway Festival.
The bulls' testicles were the curly bit for contestants in the Shepherd's Shermozzle in Hunterville at the weekend.
They had to fang into dry weetbix, scoff a raw egg and wash the lot down with a can of beer.
The beer probably also cushioned the taste of raw bulls' testicles, which had to be carted, by mouth, 50m to the next stage of the competition.
Winner Josh Masters said he'd never carried a bull's testicle in his teeth before, but it wasn't too bad it kinda tastes like chicken. 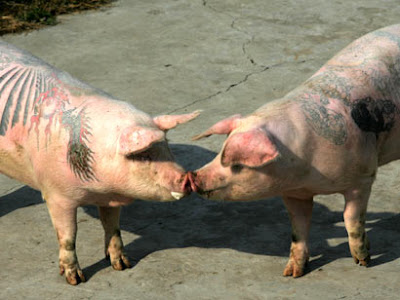 Pigs with Louis Vuitton designer logos have been banned from an art exhibition.

What sportsmen do to achieve success

Australian rugby player, John Hopawate, who was suspended from playing rugby in Australia for inserting his index finger up an opponents backside.
.
Posted by The Man at 11/06/2008 No comments:

Man Catches a Thief and.....
Police: we are too busy to help a shopkeeper who rang 999 four times
When a customer was spotted apparently stealing from his shop, Mark Ward knew the drill - apprehend the suspect, call the police and wait for help to arrive.
But after a two-hour wait in which he made a total of four 999 calls, the locksmith had no option but to bundle the man into his van and hand him over personally at the local police station.
During the increasingly desperate calls, Mr Ward was told that officers were too busy to respond and was furious to be advised at one stage: "You can let him go if you like."
Locksmith Mark Ward was forced to drive a suspected shoplifter to a police station himself when officers failed to respond to four 999 calls.
.
Fox Attacked Jogger
After it had taken a bite, the fox was in no mood to let go
An Arizona jogger had an unwelcome companion on a recent run - a fox, hanging on to her arm by its teeth.
The rabid animal had attacked her foot and then as she grabbed its neck, it bit her arm and would not let go.
She ran a mile to her car, where she managed to free herself, wrap the fox in a shirt and throw it in the trunk of her car
It later bit an animal control officer and both jogger and vet received anti-rabies injections, and the fox was confirmed as carrying the disease.
"Although containing the animal for testing is beneficial, immediate treatment is always the priority."
.
The things people keep in their car trunks
A 13ft trampoline, hundreds of bags of mints and a stag's skull complete with antlers are just some of the items people keep in cars, a government survey reveals.
Many motorists use their cars as mobile wardrobes, with men almost as likely as women to store shoes or clothes in their car boots. One woman from north- west England built up clutter in her car over two years, with items including a kettle, a sandwich-maker and two vacuum cleaners. Another car owner, a 25-year-old marketing executive, had unopened Christmas presents from two years earlier in her vehicle.
The Department for Transport survey showed that 10% of those polled could not remember the last time they cleared the clutter from their car. Main reasons for women having a clear-out were to give their vehicle a spring clean, while men were motivated by saving money by reducing their fuel consumption through lighter loads.
If all motorists adopted smarter driving techniques it would save 5.5 million tonnes of CO2 every year.
.
Immigrants try to reach UK in a truckload of shopping carts
The six men, four Indians and two Afghans, were discovered hiding in a lorry full of shopping trolleys by UK Border Agency officials in Dunkerque, France. The officials searched the Polish-registered lorry before it was due to board a ferry to Dover.
The men were handed over to the French authorities. A UK Border Agency spokesman said: The UK Border Agency has hundreds of British immigration officers based at ports in France and Belgium, working to stop illegal immigrants before they get to the UK. "As well as visual checks of vehicles, officers also use heartbeat detectors, carbon dioxide machines and sniffer dogs to find well-hidden stowaways."
.
Mother sent home with wrong baby
A Romanian woman who gave birth to a baby girl got home to find the hospital had given her a boy instead.
Cristina Zahariuc, 35, from Horlesti in Iasi county, only realized the mistake when she changed the baby's diaper.
She said: "The nurses brought me the baby in the clothes I gave them so I didn't suspect anything.
"Only when I got home and I invited some friends and the baby's godparents to see her did I notice my 'girl' had an penis. I was paralyzed."
.

FLORIDA NEWS
.
Man receives unwanted "male enhancement pump"
Lots of guys dream of living large.
But, no, this guy really didn't order any "penis pump."
So now Port St. Lucie cops are investigating why some poor guy got stuck with one.
The 38-year-old guy told cops he got a package from ILF Inc. in New Mexico.
"He produced the plain brown opened package and it contained one male enhancement penis pump and invoice billed to and shipped to (the victim)," the report states.
The guy told investigators his debit card was charged $143.45 for the pump and two additional charges.
Police suspect the orders were placed via the Internet.
A police spokesman said the incident is a reminder to safeguard credit card and bank account numbers and other personal information.
"Who knows what could end up on your doorstep if you don't," he said.
.
Cocaine defense doesn't save robber in a dress
Here's how it played out in a Dade City courtroom.
A defense attorney asks his client if he wears a dress.
"No," says Lendrick Harris.
High heels?
No again.
Harris of Tampa was on trial after being charged with robbery, carjacking and kidnapping after a man dressed as a woman robbed a bank in Zephyrhills.
Couldn't have been him, he told jurors.
Just like he told his defense attorney, he doesn't wear women's clothes.
Oh, and at the time of the robbery, he was selling cocaine in Tampa's Grant Park.
Good try by his defense attorney.
But Harris was still found guilty on all charges.
Among the evidence: The dress left in the Grand Marquis had Harris' DNA on it.
Ditto, a wig.
And this: a picture of Harris' daughter.
.
Woman hides crack pipe in her buttocks
She's got a crack pipe in her crack.
There's just no other way to describe it.
A corrections officer found the glass crack pipe between the Palm City woman's buttocks while she was being processed on an auto burglary charge.
Evelyn E. Russo, 38, of Palm City, got in trouble because she's accused of trying to get into a car that wasn't hers and asking for money for a ride.
Ordered to get out of the car, she did. And took $2 from the car, according to the cop report.
A cop caught up with Russo, who had flagged down a motorist who gave her a ride. She was charged with auto burglary and introducing contraband into a detention facility.
But she's got one smokin' butt.
.
DUI suspect gives booze to homeless man
For one homeless guy, Christmas came early.
He wound up with a bottle of holiday cheer -- Absolut vodka.
He was panhandling around Ocala when one car rear-ended another.
He said he offered to push the woman's car off the side of the road.
And then she invited him into the car and asked if he wanted the bottle of vodka, he told the cops.
The woman told him to take the vodka because she didn't want to get in trouble, according to the cop report.
The woman was charged with DUI and taken to the Marion County Jail for a breath test, which she flunked.
.
WHERE IS THE BEST PLACE TO COMMIT A CRIME?
Some people say you never get caught if you break the law next to a police station.
.
Police investigate robbery at a Cedar Falls bank
Police are investigating a robbery of a downtown Lincoln Bank this morning. Police said the robber walked into the Lincoln Savings Bank branch, 301 Washington St., at about 9:18 a.m. The branch is a half block from police headquarters.
No injuries were reported. Police would not confirm whether or not the suspect had a weapon, but no shots were fired, Police Lt. Mike McCallum said. Police had the sidewalk in front of the bank cordoned off. The bank is closed at this time.
Posted by The Man at 11/06/2008 1 comment: