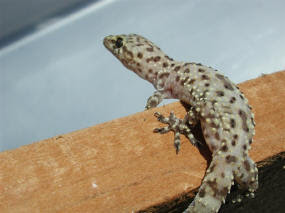 A German man who tried to smuggle 44 live geckos and skinks out of New Zealand in his underwear has been sentenced to 12 weeks in jail.
The Christchurch court heard Hans Kurt Kubus, 58, had sewn pouches into his clothing to hide the protected animals as he had gone through the airport.
Officials said the lizards could have sold for up to $2,000 (£1,239)each.
Kubus had pleaded guilty to capturing the animals, but said they were for his own collection and not for sale.
District court judge Colin Doherty told him he had knowingly "plundered part of the wildlife" of New Zealand.
"I don't think you necessarily came here to steal to sell, but I am sure the fact that you might have had excess was figured into your thinking," the Associated Press quoted Mr Doherty as saying.
Kubus had eight separate pockets sewn into his underwear, separating the different species he had collected, with room for 24 geckos and 20 skinks.
Department of Conservation prosecutor Mike Bodie said it was "the most serious case of its kind detected in New Zealand for a decade or more".
"It's similar to stealing our family silver," he told the Press newspaper.
Kubus was also fined NZ $5,000 ($3,500; £2,190) and will be deported to Germany on his release.
.
Posted by The Man at 1/28/2010 1 comment:

Tesco ban on shoppers in pajamas 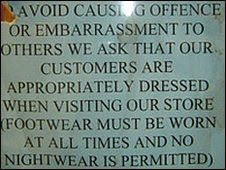 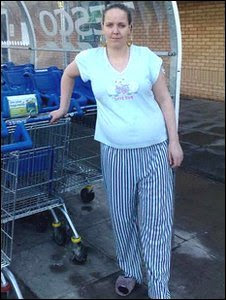 .
A Tesco store has asked customers not to shop in their pajamas or barefoot.
Notices have been put up in the chain's supermarket in St Mellons in Cardiff saying: "Footwear must be worn at all times and no nightwear is permitted."
A spokesman said Tesco did not have a strict dress code but it does not want people shopping in their nightwear in case it offends other customers.
He said he was not aware of any other Tesco stores having to put up similar signs.
The signs are placed at the entrance to the store at the suburb on the city's outskirts.
.
Posted by The Man at 1/28/2010 2 comments: