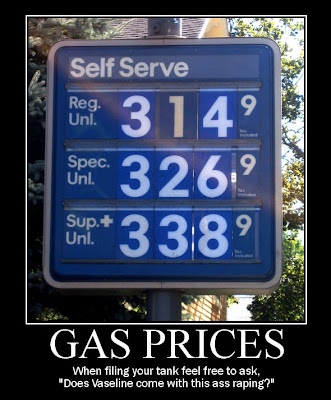 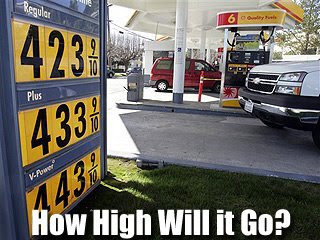 Drivers in San Mateo, Calif., shell out more than $4 a gallon for gasoline, as crude oil prices extend their march into record territory, hitting $103 a barrel. 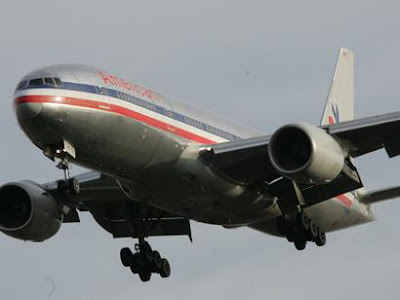 An airline is under fire for flying an aircraft across the Atlantic with only five passengers.
.
The Boeing 777 used 22,000 gallons of fuel to take the five from Chicago to London.
.
It's estimated each passenger was responsible for 43 tons of CO2 - enough to carry a Ford Mondeo around the world five times.
An American Airlines spokesman said: "With such a small passenger load we did consider whether we could cancel the flight and re-accommodate the five remaining passengers on other flights.
"However, this would have left a plane load of west-bound passengers stranded in London Heathrow who were due to fly back to the US on the same aircraft.
"We sought alternative flights for the west-bound passengers but heavy loads out of London that day meant that this was not possible."
Richard Dyer, Friends of the Earth's transport campaigner said: "Flying virtually empty planes is an obscene waste of fuel."

Labels: In The News, THINK GREEN

All new meaning of being 2 - Faced 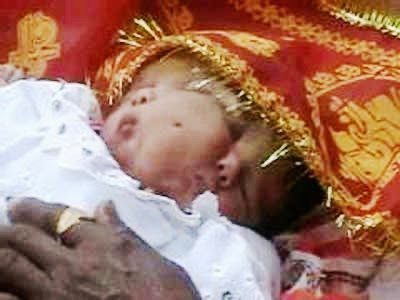 Baby with two faces born in India
People have begun to visit a small rural village in Northern India to worship a baby born with two faces.

She was born just two days ago.

Word spread quickly among villagers about the newborn baby girl.

The baby is seen as an incarnation of God and people make offerings and ask for the baby's blessing.

The doctor who delivered her said she and her mother are healthy and doing well.

The baby girl's parents hope the government will help with further treatment.
.
Posted by The Man at 3/13/2008 No comments:

Woman Sat On Toilet For 2 Years

WICHITA, Kan. -- Authorities in western Kansas said a woman who became stuck on her boyfriend's toilet while apparently sitting on it for two years is refusing to cooperate with medical workers at a Wichita hospital.
The Ness County Sheriff said the 35-year-old woman wasn't glued or tied, but became "physically stuck by her body." Sheriff Bryan Whipple said the police found the woman after her boyfriend called police late last month to report there was "something wrong" with her.
Whipple said the woman initially refused help, but was finally persuaded by emergency medical personnel and her boyfriend to go to a hospital. At that point, the sheriff said, responders pried the entire seat off the toilet. It was later removed from the woman's body at the hospital.
The boyfriend told investigators he had brought the woman food and water and asked her every day to come out of the bathroom. But he did not explain what took him so long to call for police.
Investigators will present a report to prosecutors who will determine whether any charges should be filed.
.
.
COMMENTS from Live Leak
Shit or get off the pot!!

Ex-lax is a powerful drug

A woman who had a great sense of humor died.

She wanted a parking meter on her grave that says "Expired."
So her nephew got her one on eBay!
Her grave is right by the road so everyone can see it and stopped for a laugh. 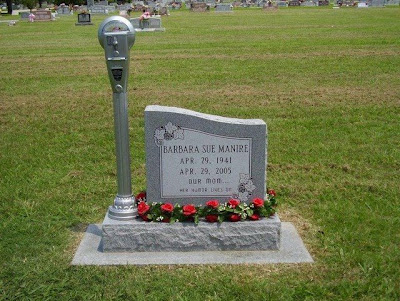 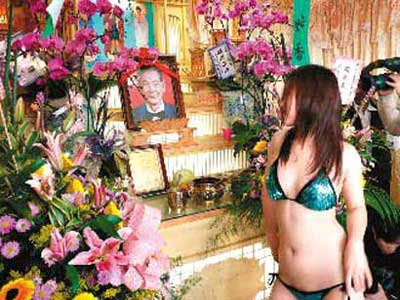 A Taiwanese man hired an erotic dancer to perform at his 103-year-old father's funeral.
The stripper danced in front of Cai Jinlai's coffin for more than ten minutes at the funeral in Taizhong town.
Son, Cai Ruigong, paid her more than £80 to dance in memory of his late father, reports United Daily News.
Cai Ruigong says he promised his father a stripper for his funeral if he lived beyond the age of 100.
Cai Jinlai passed away at the age of 103 after a three mile walk into town to vote. He was the oldest person in his village and had more than 100 descendants.
His son said his father was famous locally for his interest in strip clubs: "He would travel around the island with his friends to see these shows," he added.
.
.
Moose said...
At least it was a "Happy" funeral.
Posted by The Man at 3/13/2008 1 comment: 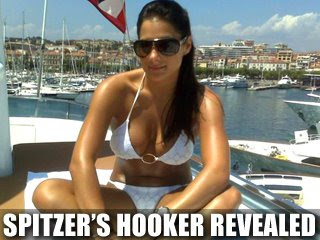 NEW YORK — 'Kristen,' the prostitute believed to have been hired by New York Gov. Eliot Spitzer for $4,100 per hour, is identified as 22-year-old Ashley Alexandra Dupre.
.
PHOTOS - Spitzer Resigns
.
Paterson to Be N.Y.'s First Black Gov.
.
.
'Penthouse' Wants Spitzer Call Girl On Cover
Magazine President: 'We Would Make It Worth Her While'
NEW YORK ― The woman at the center of the Eliot Spitzer call-girl scandal will have no problem cashing in on her notoriety: Penthouse is ready to put her on the cover. The magazine has been trying to reach out to 22-year-old Ashley Alexandra Dupre, but has not succeeded. Penthouse Magazine Group president and publisher Diane Silberstein says Penthouse would "love to have her in the magazine" and would consider offering her a cover shot. Silberstein says: "She sounds like a very interesting and talented young woman and I'm sure she has a great story to tell. We promise to make it worth her while."
Posted by The Man at 3/13/2008 No comments: 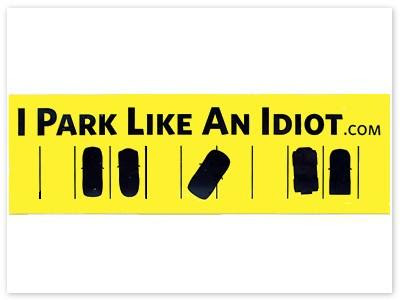 Don’t Judge Too Quickly, We Don’t

Five Ameriquest Commercials:
Posted by The Man at 3/13/2008 No comments:

What do you do when you’re bored? 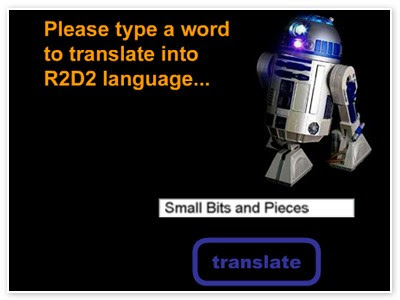 Stuck in railings for two days
An Italian pensioner got her head stuck in railings in the garden behind her home for two days.
Francesca Bellucci, 78, was only freed when a local greengrocer reported she had not come in to collect her shopping.
She was cut free by fire fighters from the railings which run alongside the stairs outside her home in the southern Italian town of Camerota.
Her local grocer called the emergency services because he was worried about her.
She said she slipped as she went down the stairs and had got her head caught in the railings. None of her neighbors heard her calls for help.
Grocer Alberto Pattacinni said: "She comes in every day without fail to buy food and I was worried something had happened to her."
.
Cops make surprise find following call
Restrained man is found in bare essentials
This is one way you don't want anyone to find you: In an abandoned building bound with pantyhose and gagged, wearing women's intimate clothing and with a foam ball in your mouth.
But that happened Saturday at 1 a.m. in Key West when police responded to a call of a “suspicious incident” at an abandoned Staples Avenue house from a nearby resident.
A report says that upon arrival, police found the 32-year-old man tied to a chair. They untied the panty hose around his head that was being used to keep the foam ball firmly in his mouth, and his hands and legs were unrestrained by rescue personnel.
Once the man, who a report says was “falsely imprisoned,” was able to talk, he said he wasn't hurt.
.
Vandals Release 600 Hogs
COLLINS, Iowa -- The Story County sheriff's office said Wednesday that nearly three-dozen hogs were killed or injured over the weekend near Collins.
Deputies and farmers said that what happened near Collins was not an accident.
They said that sometime late Saturday night, gates were opened and more than 600 hogs were set free from the Struthers family farm northeast of Collins. Then, they believe whoever set them free, used their vehicle to chase the hogs through nearby farm fields, hitting and killing several of them.
In all, more than 30 animals have been killed or euthanized because of the injuries they sustained, adding up to several thousand dollars in losses for the Struthers family.
A $1,500 reward is now being offered.
Deputies are following up on some clues in the case, including parts of the vehicle that were found.
.
Court Drops Case of Peeping Tom; Victim Was Not in Private Place
OKLAHOMA CITY — A man accused of using a camera to take pictures under the skirt of an unsuspecting 16-year-old girl at a Tulsa store did not commit a crime, a state appeals court has ruled.
The state Court of Criminal Appeals voted 4-1 in favor of Riccardo Gino Ferrante, who was arrested in 2006 for situating a camera underneath the girl's skirt at a Target store and taking photographs.
Ferrante, now 34, was charged under a "Peeping Tom" statute that requires the victim to be "in a place where there is a right to a reasonable expectation of privacy." Testimony indicated he followed the girl, knelt down behind her and placed the camera under her skirt.
.
Fight over Bruce Springsteen leads to fatal stabbing
A fight over being allowed to listen to the music of Bruce Springsteen has been named as one of the reasons an Australian woman stabbed her boyfriend fatally.
Karen Lee Cooper has pleaded guilty at the Supreme Court in Brisbane today, and has received a sentence of eight years in prison.
Cooper's lawyer told the court she experienced a "brain snap." It added, she ran to the kitchen, grabbed a knife and stabbed boyfriend Kevin Watson, after he said he didn't want her to listen to a Springsteen CD.'
Cooper, in a formal police interview, she repeated her claims: "I mean, who doesn't like Bruce Springsteen? I am 49 years old and I want to play my own music."
"Cooper regretted the stabbing and did not think her boyfriend deserved to die."
Posted by The Man at 3/13/2008 No comments: