Bank robber with an unusual request

Waterloo Police have arrested a man they say robbed a downtown Waterloo bank. It happened at the bank on Cedar Street around 10:00 Monday morning.
. 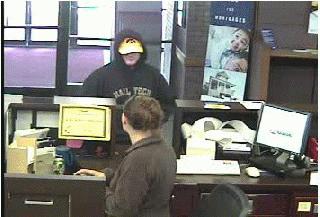 .
28-year-old Kurtis Culbert of has been arrested. He is charged with second degree robbery.
Police say Culbert passed a note to a teller, saying he had a gun and needed $80. He did get away with cash and without showing any weapon. Culbert was taken into custody in . He is being held in the Black Hawk County Jail.
.
Posted by The Man at 4/12/2011 No comments:

Man glued to toilet seat at Wal-Mart
police say a man became stuck to a department store toilet seat after someone spread glue on it. It happened at the Wal-Mart in Elkton. Officials refused to say how long the man was stuck before he was able to get help.
Police say emergency workers removed the seat from the toilet and took the man out with seat still attached to him. The seat was removed at the emergency room at .
Police say the incident is a second-degree assault case that may have been a random prank.
.

Man helps himself to beer at Walgreen’s
A man suspected of stealing beer from a store says there's a logical explanation.
The 25-year-old man was arrested late Saturday on his way out of a Walgreen’s in northwest . Since the store was already closed, the man tripped the burglar alarm -- and a police officer caught the suspect nearby with a case of light beer.
The man explained that he couldn't get any employees to sell him the beer while the store was still open. So he found a place to hide, and then waited for the store to close and the employees to leave before he helped himself.
There's no word on charges, and the man's name has not been released.
.

Police arrest man who had been praying nude
Police , says a man praying in the nude was arrested on a public street west of downtown .
Capt. Jim Davidsaver said that a passer-by reported seeing the man early Sunday morning, kneeling and looking to the sky. When an officer asked the man why he was nude, the man said he didn't know.
He was arrested on suspicion of indecent exposure.
.

Unknown woman accused of lifting 14 lobsters
Police in , would like to get their claws on a woman accused of shoplifting 14 live lobsters.
Authorities released a surveillance photo Monday that shows the woman pushing a shopping cart near the front of the Milton Road Market Basket grocery store.
Police said that the woman entered the store Friday afternoon and asked for a selection of lobster from the clerk in the seafood department.
Store employees say the woman received the lobsters and then left the store without paying. She left in a blue van with a partial license plate "222."
Police Capt. Paul Callaghan says the 14 lifted lobsters amounted to about 16 pounds of seafood.
.

's penis museum gets human specimen
In life, Pall Arason was an attention-seeker. In death, the 95-year-old Icelander's pickled penis will be the main attraction at one of the world's most bizarre museums.
Sigurdur Hjartarson, who runs the in the tiny Icelandic fishing town of , says Arason's organ will help complete his extensive collection of whale, seal, bear, and other mammalian members. The museum has been open since 1997 but Hjartarson has long waited for a human specimen to round out his display.

The museum now contains a collection of two hundred and nine penises and penile parts belonging to almost all the land and sea mammals that can be found in .
.
Posted by The Man at 4/12/2011 No comments:

A few dozen men seeking to raise awareness for sexual assault violence against women tried to walk a mile in their shoes Friday — literally.
. 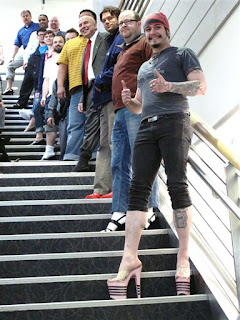 .
Among the participants — some burly and others bearded — in the fourth annual "Walk a Mile in her Shoes" event at the University of Alaska Anchorage was the head of Alaska State Troopers, Col. Keith Mallard, who slipped out of one of his red suede peep-toe shoes during the walk.
"I had a blowout," Mallard said sheepishly. "It didn't hinder my progress any. I just had to pull to the side and get a tire change."
The men teetered precariously along the mile-long route, trying to raise money for a local nonprofit that supports sexual assault victims. Donations to Standing Together Against Rape will go toward banishing sexual assaults and other acts of violence against women.
The men were game, even if it meant nearly tripping over their own stilettos.
.
Posted by The Man at 4/12/2011 No comments:

It's no optical illusion - Feng Hu really is clenching a steel nail with his eyelid and swinging weights from it. The eye has it: Feng Hu puts a steel nail at the corner of his eye, ties a rope to a bucket of water and lifts it
. 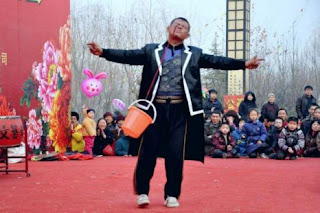 Kung Fu master Feng - from , province, central - began staging his shows after decades of studying pain control techniques as part of his kung fu training.
Feng who likes swinging a bucket of water from his eye, explained: 'I can redirect my chi to make parts of my body forget about their nerves and they no longer hurt or get damaged. 'People think it is magic but it is years of dedication and training.'
.
Posted by The Man at 4/12/2011 No comments:

Voina, the radical art group behind that giant penis drawing on that drawbridge in , have won a major prize for their efforts.
The group painted the 220ft-long phallus on 's in protest at heightened security in the city ahead of June's International Economic Forum.
As you can see in the video below, the idea is that the penis rises, erection-like, when the bridge is raised to let traffic through.
The drawbridge happens to be opposite the headquarters of the FSB security service - one of 's tourist attractions.
.
.
Posted by The Man at 4/12/2011 1 comment: