By shutting off all the lights in the room for 30 minutes and taking a long exposure of the path the Roomba took while cleaning up. 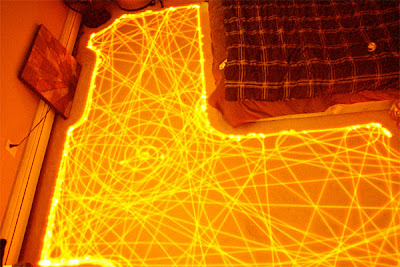 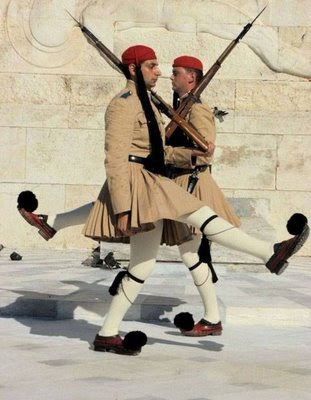 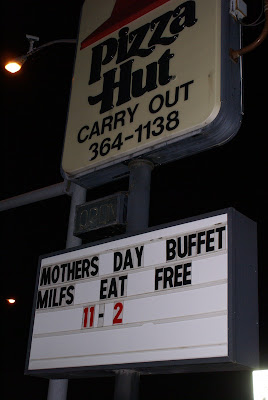 Men don’t call your mistress a prostitute
A angered mistress killed her lover – by chopping off his testicles and letting him bleed to death.
Girlfriend Eugenia Leshcheva flew into a rage and sliced off 73-year-old Anatoly Bukolov's privates when she claimed he called her a prostitute.
Cheating Anatoly had invited Eugenia, 46, to his home in Voronezh, Russia, for a quickie while his wife was at work.
But the pair rowed when Anatoly suspected she was seeing someone else.
Blonde Eugenia said: "He called me a prostitute."
"And that made me really, really angry."
.
Indian man avoids washing for 35 years
An Indian man who fathered seven daughters has not washed for 35 years in an apparent attempt to ensure his next child is a boy, newspapers reported.
Kailash "Kalau" Singh replaces bathing and brushing his teeth with a "fire bath" every evening when he stands on one leg beside a bonfire, smokes marijuana and says prayers to Lord Shiva.
"It's just like using water to take a bath," Kalau was reported as saying. "A fire bath helps kill germs and infection in the body."
Kalau's hygiene regime has taken its toll on his professional life.
The grocery store that he used to own closed when customers stopped shopping there due to his "unhealthy personality" and he now tills fields near Varanasi airport.
But his neighbors in the village of Chatav said there was another reason for Kalau's washing boycott.
"A seer once told Kalau that if he does not take a bath, he would be blessed with a male child," a man called Madhusudan told the paper.
Most Indians prefer sons, who are typically regarded as breadwinners, while girls are seen as a burden because of the matrimonial dowry demanded by a groom's family and the fact that their earnings go to their husband's family.
.
Girl uses gun to force sister to play
Police in Martinsburg, W.Va. said an 11-year-old girl threatened her 7-year-old sister with a gun to force the younger child to play with her on Monday at her grandmother's residence. Police said the girl also pointed the .38-caliber pistol at her grandmother. The child surrendered the gun after the grandmother made several demands for it.
The weapon wasn't loaded but police believe the girl didn't know that.
Police said the two girls argued and the 11-year-old then retrieved the gun from her grandmother's bedroom.
She was being held at a juvenile detention center on charges of brandishing a weapon and domestic assault.
.
Hungry suspect caught in Taco Bell parking lot
Officials say a suspected drug dealer who led police on a 90 mph chase in Indiana was arrested after he stopped suddenly at a Taco Bell parking lot.
Fort Wayne police Sgt. Mark Walters says 36-year-old Jermaine Askia Cooper told officers he "knew he was going to jail for a while" and wanted to get one last burrito.
Cooper was held without bail on four counts of dealing cocaine, one count of resisting arrest by fleeing and other charges.
.
Man kills wife with chainsaw
Investigators in Otsego, Michigan says Deb Daniels was likely trying to help her husband roll a log out of the way when the chainsaw he was using accidentally cut her neck.
"Autopsy results and the husband's story are consistent," says Allegan County Sheriff's Lt. Frank Baker.
Baker says Jerry Daniels was cutting a log at the couple's Otsego home, 765 Woodlea Drive in Otsego, Sunday afternoon when his wife came up behind him.
Lt. Baker says Jerry would not have heard his wife, who likely kneeled down to help him roll the cut log away.
When he pulled the saw from the log it came back and caught Deb in the neck, according to Baker.
"I heard a cry for help, so I came outside and at that time I saw what was going on, and I rendered as much aid as I possibly could," said David Labonte, a neighbor and deputy for the Allegan County Sheriff's Department. "I'm glad that based on my position that I was the one that was the first to respond."
But nothing could help the 39-year-old woman. She bled to death at the scene.
Investigators have ruled the incident as accidental.
VIDEO
.
Posted by The Man at 5/13/2009 1 comment: 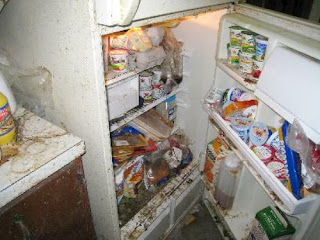 An office worker cleaning a fridge full of rotten food created a smell so noxious that it sent seven co-workers to the hospital and made many others ill.
Firefighters had to evacuate the AT&T building in downtown San Jose on Tuesday after the fumes led someone to call 911. A hazmat team was called in.
What crews found was an unplugged refrigerator crammed with moldy food.
Authorities say an enterprising office worker had decided to clean it out, placing the food in a conference room while using two cleaning chemicals to scrub down the mess.
The mixture of old lunches and disinfectant caused 28 people to need treatment for vomiting and nausea.
Authorities say the worker who cleaned the fridge didn't need treatment — she can't smell because of allergies.
.
How to Clean a Stinky Fridge
Before you start to clean a stinky fridge, you might want to invest in rubber gloves and a face mask. Refrigerators that were turned off smell especially foul. Once the fridge has been cleaned, its stench might linger for weeks, so be prepared.
.
Posted by The Man at 5/13/2009 No comments: 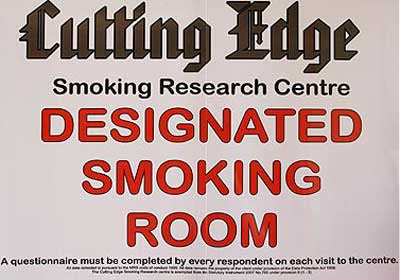 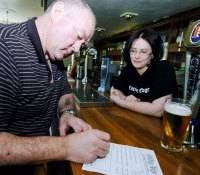 Action was expected today against a pub landlady who tried to sidestep the smoking ban by exploiting a legal loophole.
Kerry Fenton, landlady at the Cutting Edge in Worsbrough, Barnsley, turned the pub's tap room into a "smoking research center", where people could smoke if they filled in a questionnaire.
It included questions such as how many cigarettes people smoke, and whether they like a smoky atmosphere in pubs.
The regulations state that a "designated room in a research or testing facility" does not have to be smoke-free "while it is being used for any research or tests." But less than a week after the so-called research centre was set up - it looks set to be stubbed out for good.
Barnsley Council officials have pointed out that the Cutting Edge is "clearly not a research or test facility" and therefore not exempt from the smoking ban. Enforcement officers are set to visit the premises in Bank End Road today (Wednesday) and take action, which could lead to a maximum penalty fine of £2,500.
.
Posted by The Man at 5/13/2009 No comments:

How bad do you need to rub one out to stop along the side of a busy street?
.