A Chinese woman's public proposal went slightly awry when her boyfriend turned her down in front of dozens of onlookers.
After sending her boyfriend a message to come and meet her, the woman stands on top of her car holding a bunch of roses to propose to her boyfriend.
. 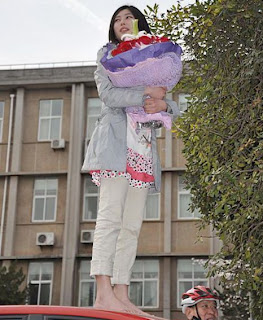 .
On the front window with two boards displayed the words 'Marry Me'.
However, when her boyfriend arrived his reply surprised the large crowd that had gathered - because he turned her down.
He said: 'It should be my job to make the proposal. However, I now have nothing and I can't give you a good life. If you can wait for me for three years, when I should have bought my house and car, I will propose to you.'
. 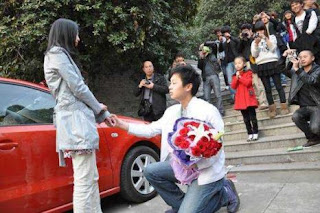 .
The man might look like he's proposing, but in fact he's consoling the woman for turning her down.
.
Posted by The Man at 4/09/2011 No comments:

Man fails to win at poker, gets prison
An man was sentenced to prison after he asked to repay his investment scam victims through poker tournament winnings, but failed to find luck at the card table.
"This was long overdue," said J. Dee Dennis Jr., the superintendent of the New Mexico Regulation and Licensing Department. "This individual wanted to con us into believing that keeping him out of prison would help his victims get their money back. ... We're calling his bluff. It's about time we sent him to prison."
Samuel McMaster Jr. stayed out of prison after prosecutors agreed to a request from his attorney to delay sentencing so that he could earn money to repay his victims. The former insurance agent was accused of stealing nearly $450,000 from 23 investors over several years.
After he failed to pay, McMaster was sentenced Wednesday to 12 years in prison, five years of supervised probation after his release and ordered to make full restitution to his victims.
Investors had been promised up to 10 percent interest, but Bowman said they never received anything, not even the return on their original investments.
.

Handcuffed suspect steals patrol car
Police in said a burglar suspect was handcuffed and buckled into the back seat of a patrol car was able to climb to the front seat and drive off.
Police said Robert Cantrell, 41, was pulled over in Atascocita about 6:30 p.m. by a Harris County Deputy Sheriff who determined the Ford pickup truck had been reported stolen.
The truck was found to contain a number of apparently stolen electronic devices, police said.
"He (the deputy) turned around and saw the guy (Cantrell) jump over the back seat to the front seat," Capt. Wally Wieghat said.
Cantrell drove the vehicle in reverse, struck a parked vehicle, spun around and sped away from the scene with the deputy chasing on foot, authorities said. The suspect drove through about 15 back yards before crashing into a deep bayou and fleeing the patrol car on foot.
Deputies found the suspect hiding in the back seat of a nearby parked car, authorities said.
Cantrell is facing counts of felony escape and criminal mischief among other charges, police said.
.

Typo gives away fake wine
Fake bottles of 's best-selling Jacob's Creek wine have flooded the market, but were discovered because of a typo on the label.
Hundreds of bottles of imitation Jacob's Creek, which have made their way into bottle shops across the country, have already been seized.
The wine appears identical to the real thing apart from a tell-tale misspelling of on the label - and the apparently horrible taste.
The fakes are believed to have come from .
.

Pot was found in a shipment of steel beams
Authorities say a man is facing drug trafficking charges; accused of accepting a delivery of 266 pounds of marijuana packed in a shipment of steel beams.
It was reported Thursday that the pallet of a half dozen 8-square-inch beams had been welded shut and sent from Brownsville, Texas, to a shipping company in Charlotte. Authorities say the drug was detected by a canine unit of U.S. Immigration and Customs Enforcement.
Gaston County Police arranged for an undercover officer to deliver the pallet to the address on the package. Police say Carson David Hyde of was arrested after accepting the shipment. Police said Hyde's name was on shipping papers.
.

Woman steals church guitar, sells it for $20
Someone who walked into the took the low road out.
Police in have charged 25-year-old Cassie K. Chapman with felony theft after a bass guitar that was stolen from the church showed up at a pawn shop less than a mile away.
Surveillance video from the church showed two women and a small child walking in on March 30.
A court affidavit states a pawn shop employee called police and said the shop had just bought the instrument for $20. Video from the store showed the same woman as the church surveillance did.
.

Fake priest gets prison in collection-plate theft
A man who authorities say dressed like a priest and stole a collection plate during Mass has been sentenced to at least four years in prison in the case.
Jackson County Circuit Court Judge John McBain on Thursday sentenced 52-year-old Alan Fiddler of to four to 20 years in the November theft of a collection plate containing about $3,600 from St. John Catholic Church. The judge noted that Fiddler had nine parole violations on his record in issuing the sentence.
At the time the collection plate was taken, Fiddler was on parole in another theft case.
.
Posted by The Man at 4/09/2011 No comments: