You will have to see it to believe it

.
.
Florida man David Mlynick is facing a robbery charge for allegedly stealing TAG body spray from a grocery store and then pulling what appeared to be a gun on a store manager who pursued him into a nearby business. Mlynick, 23, allegedly boosted the deodorant--which is heavily marketed to young men--from a Publix store in Dania Beach. The TAG body spray retails for about $4.
Posted by The Man at 11/07/2008 No comments:

You're Going To Get Screwed

In a small town the patrolman was making his evening rounds...
As he was checking a used car lot, he came upon two little old ladies sitting in a used car.
He stopped and asked them why they were just sitting there in the car.
Are you trying to steal it?
"Heavens no, we bought it."
"Then why don't you drive it away."
"We can't drive."
"Then why did you buy it?"
"We were told that if we bought a used car here we'd get screwed... so we're just waiting.
Posted by The Man at 11/07/2008 No comments:

Workmen clear 100 TONS of rubbish from a home 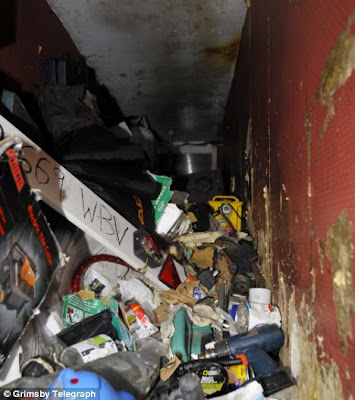 It's been a while since Merv Jones tidied up or vacuumed.
In fact, it's been so long that he might never have been able to find the Hoover amid the astonishing 100 tons of rubbish and bric-a-brac in his home - assuming he ever looked for it.
Every room in the terraced house was filled from floor to ceiling with junk. It was even piled up in the hall. Both front and back gardens were also a mess.
After years of complaints from neighbors, council officials finally moved in to empty the building in Grimsby, filling skip after skip.
The extraordinary array of bric-a-brac had been collected over decades by the 73-year-old, including old rifles, ammunition and swords, along with hundreds of more ordinary items, such as dolls, electrical equipment, toys, pictures, books and ornaments.
As well as all the junk, there was a great deal of household rubbish. Windows were broken, pigeons had moved into the loft and bait traps had to be laid for the rats.
Mr Jones was put up in a hotel while his house was emptied over three weeks. North-East Lincolnshire Council intends to reclaim the cost of the operation from him.
More Pictures and More

Couple arrested for sex at Bills-Jets game
Security officers at Ralph Wilson Stadium in Orchard Park, N.Y., said a reported disturbance in a ladies' restroom turned out to be a couple having sex.
Police said Alicia Venneman, 29, was charged with disorderly conduct and her boyfriend, Jeramy Kemper, 31, was charged with trespassing and resisting arrest after they were caught having sex in the women's bathroom across from Section 336 of the stadium during Sunday's game between the Buffalo Bills and the New York Jets.
.
Man sees his stolen bike auctioned on eBay
A suburban Chicago man who saw his stolen bicycle for sale on eBay helped police arrest a suspect in the case, police said.
Jeremy Miller, 27, of Chicago, was charged with felony theft after detectives found 17 stolen bicycles in his home, the Chicago Tribune reported.
Police said Miller stole six bikes from a Northeast Illinois Regional Commuter Railroad stop in suburban Wilmette in October, and one of the victims notified police after he spotted his bike for sale on the eBay online auction and shopping Web site.
Police won the online bidding for the bike, and Miller was arrested at a shopping center in suburban Skokie, where he had gone to deliver the bike to undercover detectives.
.
9-year-old attempts to drive to grandma's
A 9-year-old boy is in police custody after he took his family's car on a drive to visit his grandmother.
Police received a call at around 7:30 a.m. on Monday from a passerby saying there was a car driving along a prefectural road without anyone at the wheel. An officer subsequently found the boy sitting in the driver's seat of an automatic small car in a nearby convenience store parking lot.
"It's my first time driving, but I learned from watching dad and playing at the video arcade," he told police.
.
It’s a panty raid
A man has proven that you can never have too much underwear when he stole more than 130 pairs of panties from a Victoria's Secret store.
The man snatched $1,067 worth of underwear from a table at the Dallas store Monday.
A police report said a female accomplice held open the door during the theft and both sped away in a green car.
The report did not indicate what styles or sizes were stolen.
.
Teen survives being compacted in recycling truck
Police in Milwaukee say a teenage boy has survived after being accidentally dumped into the back of a recycling truck and compacted.
Police say the 14-year-old ran away from a boot camp-style school for teens Monday and hid in a recycling bin filled with cardboard.
The bin was picked up by a Waste Management truck and dumped into the vehicle's rear compactor.
Waste Management spokeswoman Lynn Morgan says the truck continued on its collection route, compacting cardboard several times.
The boy wasn't discovered until the truck dumped its load at a recycling processing center.
He was semiconscious and was taken to a hospital, but police say his injuries aren't life-threatening.
.
Bacon Wins and Fries Lost in Colorado Election
There was a tasty race for Colorado senate when voters got to choose between Bacon and Fries.
In the end, Bacon won.
Democrat incumbent Bob Bacon defeated Republican challenger Matt Fries on Tuesday 63 percent to 37 percent to represent the district that encompasses most of Larimer County in northern Colorado.
"I am so pleased that the voters appreciate the work that I have done," Bacon said
Bacon originally was elected to the seat in 2004 after serving three terms in the state House of Representatives. Fries is a long-time education advocate.
.
Why was Burger not in the running? He was taken off the palette.
.
Man says he accidentally stole a car
A motorist confronted by a Alaska State Trooper said he was stunned when the officer told him the car had been stolen.
Charles J. Schultz explained that he was driving his Chevy Cavalier and everything was fine. That's when the trooper informed Schultz that he was actually behind the wheel of a Ford Escort.
Police charged Schultz with auto theft, felony driving under the influence and misdemeanor drugs misconduct. Police said the 27-year-old's blood-alcohol content was .166, more than twice the legal limit.
It all started when Fairbanks police received a report shortly after midnight Friday that a Ford Escort had been stolen from the parking lot of a gentlemen's club. An officer spotted the stolen Ford two hours later — with Schultz driving.
Schultz swore he had no memory of taking the wrong vehicle outside the club, according to a criminal complaint.
.
Cleaning cobwebs with blow torch "NOT GOOD"
Perhaps a broom would have been a better idea
A single-story home in Sargent was damaged by fire Wednesday morning after the homeowner accidentally set the fire while cleaning cobwebs from the eaves around the exterior of the residence with a blow torch.
Picture and More
.
Posted by The Man at 11/07/2008 No comments: