Men test-drive truck to junkyard
Two Kentucky men who sold a truck they had taken for a test drive to a junk dealer saying it wouldn't run have been indicted on theft charges after the dealer started it up.
A Lewis County grand jury indicted Patrick Hinton, 23, and Christopher Case, 24, on theft charges after the January incident.
A police report said the men parked the truck a short distance from the junkyard and told an employee the transmission was out.
Police say the wheels were removed and the junkyard paid the men $512, but when they left, the employee was able to start the truck and put it in gear.
.
Pit bull chases patrol car; officer radios for help
A Fort Walton Beach police officer radioed for help after a pit bull began chasing his patrol car. The large reddish animal was wearing a spiked collar. An animal control officer responded and found the officer still in his car, waiting for help.
"He looks big and scary but he's not big and scary at all," said Dee Thompson, director of animal control services. The animal willingly went with the animal control officer, who contacted his owner. It was the dog's first encounter with PAWS.
Animal control officers said the dog was wiggly and happy, responding to baby talk and playing with a green frog chew toy while waiting to go home.
His owner came to get the animal within hours, calling him "my baby." He works the night shift and hadn't realized the dog had gotten out.
.
Man who cheated on girlfriend humiliates himself
The man caught cheating paraded through a town wearing a board declaring his regret in a bid to win her back.
Joe Page, 26, from Brighton, wore a sandwich board expressing remorse and apologizing for his infidelity.
His girlfriend, Jess Little, had discovered on Facebook that he had met another woman for a secret date.
Mr. Page immediately sought to make amends by striding through Brighton wearing the board which said: “I cheated on my girlfriend. I am humiliating myself to show I am sorry.”
On the back, it said: “I love her so much. I will do anything to get her back. I am so sorry.”
Mr. Page, a comedian, said his efforts received a mixed response.
.
NYC refuses unicyclist's lawsuit
New York City is fighting a $3 million lawsuit brought by an unicyclist who's taking issue with a technicality (Loop Hole) in city code.
Circus performer Kyle Peterson was issued a ticket in 2007 for violating an ordinance that prohibits riding a "two- or three-wheeled device" on sidewalks.
He filed the federal lawsuit against the city claiming his rights were violated because he was riding on one wheel.
Both summonses were dismissed but Peterson says he wants the freedom to ride his unicycle.
The city filed a motion to dismiss the suit this week, saying the law was intended to protect pedestrians.
The city says the difference between a bicycle and a unicycle "is negligible."
.
Posted by The Man at 3/19/2011 No comments:

How to be Notice 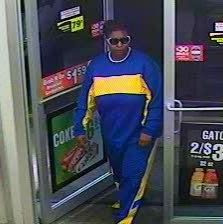 Police in Topeka, Kan., say one holdup suspect's unique outfit made it easy enough to find her - because she showed up hours later wearing the same clothes to watch the city's St. Patrick's Day Parade.
The 26-year-old woman was taken into custody after an officer spotted her watching the parade along a downtown street.
Authorities believe she entered a convenience store around 3:30 that morning holding a screwdriver and demanding money from a clerk.
Surveillance tape showed her leaving the store in a bright blue warm-up suit with a broad yellow stripe - the same attire the officer noticed along the parade route hours later.
.
Posted by The Man at 3/19/2011 No comments: