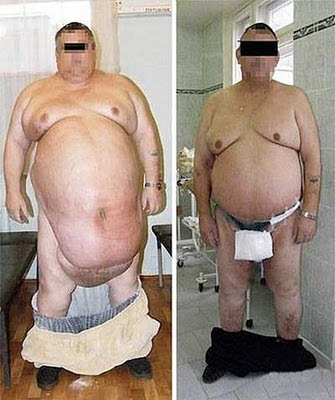 Petr Ferinov is just half the man he used to be - after surgeons sliced an amazing 264lbs of fat from his body.
The 49-year-old patient, from Voronezh, Russia - who now tips the scales at a trimmer 19 stones - is literally half his old weight.
Petr - seen here before and after the four hour op - says he was so fat he could no longer sleep on his back, could barely walk and had abandoned any hope of a sex life.
Now he says he's going on a strict diet to shed another few pounds to get back to his ideal weight of 13 stones.
.

.
Surgeon reprimanded for swearing at obese patient
An experienced surgeon who told a severely obese patient she was "going on a f***ing diet" has been reprimanded over his foul mouth and for removing the patient from a waiting list after she complained.
In a decision issued today, Health and Disability Commissioner Ron Paterson found the gastro-intestinal surgeon breached the patient's code of rights and showed no understanding of the vulnerability of his gastric bypass patient.
The 44-year-old Maori patient saw the surgeon last April after she had repeatedly failed at dieting.
When she said she preferred the word "lifestyle" to "diet", the doctor told her she was "bullshitting" herself and was "going on a f***ing diet".
.
Posted by The Man at 2/12/2010 No comments:

Woman posts 'little' penis pictures
A Swedish 18-year-old was charged with harassment for posting pictures of her ex-boyfriend's "little" penis on lampposts in his neighborhood, officials say.
Court papers say the teenager posted the pictures, complete with the "tiny" description and the 24-year-old ex-lover's name and phone number, after he ended their brief relationship to date another woman.
The newspaper said the woman also allegedly posted pictures of her ex-beau's new squeeze with a note labeling her a "slut" and threw eggs at her ex-boyfriend's car.
Police said the woman admitted to them that she knew her activities were illegal.
.
6-year-old girl was Handcuffed Because Of Her Behavior
Parents Call Measures Extreme, But Sheriff's Office Report Says Daughter Out Of Control
A Port St. Lucie first-grade student was handcuffed and committed to a mental health facility because of her classroom behavior, and her parents are furious that the school took such extreme measures.
Mickey Shalansky explained Wednesday what he said happened to his 6-year-old daughter at Parkway Elementary.
"She couldn't put her in two handcuffs because her wrists are that small, so she put them both in the same handcuff and left marks on my daughter's arms," Shalansky said.
.
Man was beaten by deputies for burping
Thomas Scott Vandegrift, 24, said in the lawsuit filed last week in U.S. District Court in Roanoke that his burps, caused by acid reflux, led deputies in the Roanoke jail to twist his arms behind his back while he was handcuffed, force him to his knees and beat him.
.
Man chops off penis at Hong Kong airport
Man stole an 8” knife from Popeye's Chicken, severed his penis, and then boarded the plane as though nothing had happened.
.
18 Prison Guards Arrested In Drug Sting
Twenty-two people, including 18 corrections officers and a drug counselor, are accused of running a drug ring in two South Florida prisons.
.
Thinking It Was Funny, A Man Use Stink Bombs at Wal-Mart
.
Dog allergic to pet food and cats
Five-year-old Joey can only eat potatoes, porridge and barley
.
Man Arrested For Telling Police Dog to Sit
.
Man invents chastity belt for dogs
.
Man smashes 29 TVs at Wal-Mart
Destruction caught on security video
.
Dog allergic to pet food and cats
Five-year-old Joey can only eat potatoes, porridge and barley
.
Internet prank on Craigslist
.
Posted by The Man at 2/12/2010 No comments:

Dramatic Video footage from Argentina has captured the tense moment when a small van got stuck on the train tracks as a train approached.
It happened as a series of cars were filmed going round lowered safety barriers meant to halt traffic for the oncoming train.
The footage shows a passenger on the back of a motorcycle jumping off to push the van out of the way of the path of the train.
He only just manages to get the vehicle off the tracks in time, and then jumps back, narrowly missing being hit by the train himself.
After the incident the man exchanges a triumphant "high five" gesture with the motorcyclist, who hugs him with relief.
.
.
Posted by The Man at 2/12/2010 No comments:

Meteorologist Freaks Out Over Blizzard

.
Snow on ground in 49 states
A weather forecaster is predicting an unusual weather phenomenon — snow on the ground in 49 states at the same time.
Patrick Marsh, who works at the National Oceanic and Atmospheric Administration's National Severe Storms Laboratory, says a winter storm passing through the southern U.S. Thursday and early Friday is predicted to leave measureable snowfall in the Deep South, including parts of the Florida Panhandle.
He says he's unsure if such a weather phenomenon has ever occurred before.
.
Posted by The Man at 2/12/2010 No comments: