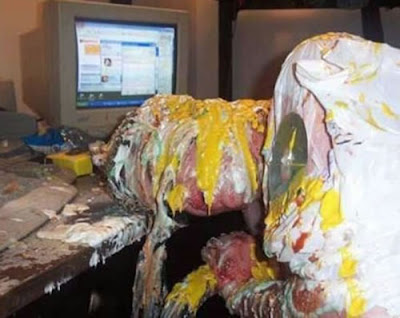 Maybe it's their way of telling you what they are actual for. 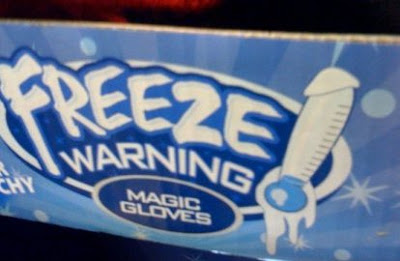 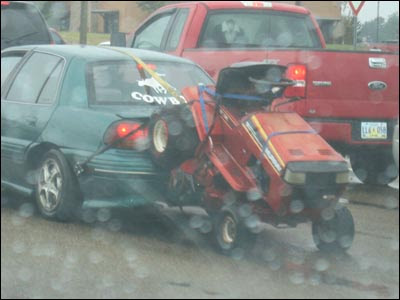 .
Big Ben said...
I think what is most disturbing about this picture is that someone who identifies themselves as a "Cowboy" Is driving a 4 door sedan..
I guess gas prices over the last year have made even the cowboys downsize...
.
This must be the family car.
.
Posted by The Man at 1/22/2009 No comments:

Her response for someone telling her she has small tits 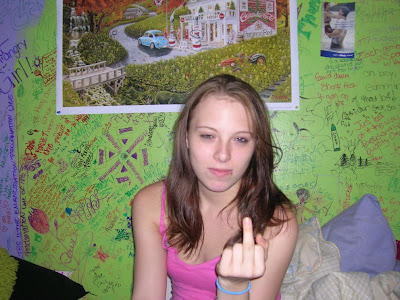 Showing off for the camera 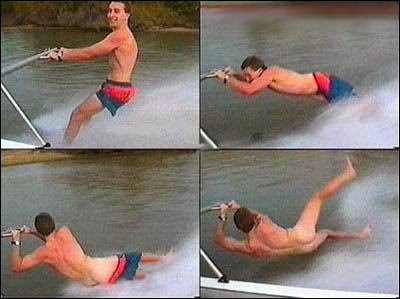 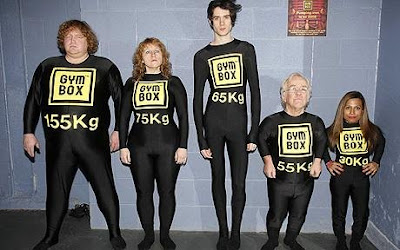 A gym is offering its customers an unusual set of dumbbells to exercise with – including an overweight man and two dwarfs.
Members of Gymbox in Bank, central London, can choose to lift any of five differently sized "human weights".
Wearing Lycra catsuits which label their weight, they sit on specially adapted machines and shout words of encouragement.
Gymbox owner Richard Hilton said: "A lot of our members felt that lifting metal weights was boring and not especially motivating.
"They said that they had no idea what they were lifting.
"Experts in sports psychology agree that visualization is a significant factor in improving performance and human weights are as visual as it can get.
"Our human weights will, at the gym-goers request, shout encouragement like 'Come on, lift me harder and faster' and 'You're doing great. Look at those muscles building'.
"Otherwise, they will just keep quiet and keep still as they are lifted."
.
Posted by The Man at 1/22/2009 No comments:

Woman Bound Daughter's Hands Before Bedtime
Authorities say a Denver woman tied her 10-year-old daughter's hands behind her back before bed each night for about a year to keep her from stealing food.
Police arrested 52-year-old Danelle Daunchet on child abuse charges on Jan. 7. She's free on $50,000 bail. She didn't immediately return a telephone message Wednesday.
District attorney's spokeswoman Lynn Kimbrough says the girl is in the custody of the Department of Human Services.
Police say the girl told them Daunchet used zip-ties to bind her hands, and that she had to sleep on her back so it wouldn't hurt. The girl said her mother freed her with a knife each morning, and she showed officers marks where she said the knife sometimes cut her.
Daunchet is scheduled to be in court Friday.
.
Disgruntle worker infected factory with peanuts
A food factory worker who was reprimanded for pinning up a "girlie" calendar exacted a "spectacular" revenge by infecting the plant with peanuts, bringing it to a standstill and costing his employers over £1 million, a court has heard.
Paul Bentley, 41, is alleged to have scattered the nuts around at Pork Farms' Riverside Bakery in Nottingham, which produces ready meals for customers including Sainsbury's and Marks and Spencer.
He knew the plant was a nut-free zone, but is accused of bringing production to a halt a day after being ordered to remove the calendar, which was on a wall at his workstation.
The factory, which employs 600 people, was forced to close for 24 hours while it was fully sanitized.
.
Police arrest stripper 22 times for impersonating an officer
A police force has been criticized after spending £170,000 to arrest a stripper 22 times for impersonating an officer.
Stuart Kennedy, a 25-year-old genetics student from Aberdeen University, has spent 123 hours in police custody since his first arrest in March 2007.
Since then he has faced charges including possession of an offensive weapon - his truncheon and a fake CS spray - and for allegedly fitting a flashing light to his car.
But so far none of the cases brought against him have yielded a successful prosecution and the latest collapsed in court last week after the Crown Office unexpectedly dropped the charges.
.
Bubble O'Bill ice cream helps win beat drink-driving fight
Chief traffic cop has warned drivers to be aware after a man's blood alcohol reading rose after eating an ice cream.
After a few bites the man recorded a blood alcohol concentration of 0.018.
The experiment took place after the driver applied to Frankston Magistrates' Court to have the interlock device removed from his car.
The prosecutor had queried why the machine had recorded a "fail", which stops the user starting their car.
But the man was adamant he had not been drinking and that the reading was caused by the Bubble O' Bill he had eaten when he stopped at a service station.
Magistrate Rod Crisp told the driver to put his claim to the test by heading across the road to buy one so police could check his story. A police officer conducted a preliminary test that confirmed he was 0.00.
The man consumed part of the icy treat, then police tested him again.
The reading of 0.018 was duly reported back to Mr Crisp, who granted the driver's application to have the device removed.
.
Baby calls 911 and gets dad arrested
A British Columbia man probably wishes he had given his 11-month-old son a set of keys to play with instead of a phone, after the infant accidentally dialed 911 and brought police to dad's marijuana grow operation.
Mounties say a 911 call came in from a White Rock, B.C., residence Friday morning but whoever was on the other end of the line hung up.
Officers arrived at the residence and after numerous knocks on the door went unanswered, they entered the home.
"The gentleman was quite surprised," said White Rock RCMP Const. Janelle Canning.
She said the 29-year-old male, startled by the sudden sight of police, insisted he hadn't made the call.
When it was suggested a child might have dialed, the father objected and said his son was far too young.
That's when police spotted the baby boy, phone in hand.
"We saw him playing with the cordless phone and just pressing all the buttons, so evidently he had called 911," Const. Canning said.
With that mystery solved, officers began inspecting the residence and soon discovered a 500-plant marijuana grow operation.
.
Posted by The Man at 1/22/2009 No comments: 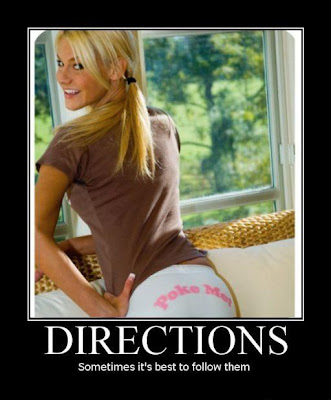 .
Big Ben said...
I have waited a long time for an opportunity such as this...
So far nothing like this has presented itself to me..
But I will continue to dream.
.
You and me both.
.
Posted by The Man at 1/22/2009 No comments: 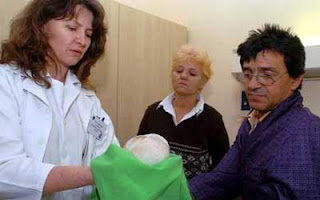 A coconut-sized kidney stone 6in in diameter has been removed from a patient in Hungary.
Sandor Sarkadi underwent an abdominal operation in Debrecen, 150 miles east of Budapest, after doctors discovered the stone following an X-ray.
Mr Sarkadi was rushed into an operation in the Kenez Gyula Hospital after the X-ray showed a giant lump.
Kidney stones do not normally get much bigger than a golf ball, and even that is usually considered very large.
After a kidney stone forms, it will often pass through the urinary system, but it is fairly common for a stone to block the urinary system. "OUCH"
.
Posted by The Man at 1/22/2009 No comments: