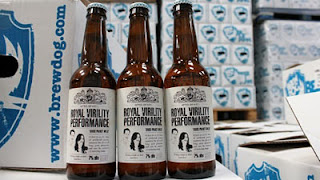 The label features the cheeky words 'Arise Prince Willy'. BrewDog has sent several bottles to Prince William for the wedding night.
James Watt, co-founder of BrewDog, said: "As the bottle says, this is about consummation, not commemoration."
Just 40 bottles of the £10 tipple will be produced initially, and will go on sale on 29 April at BrewDog.com with all proceeds going to the charity Centrepoint.
Buyers will be limited to one bottle each due to the powerful effects. The firm plan to continue production if it is a success.
.
Posted by The Man at 4/21/2011 No comments:

Labels: "SEX", Food-Drink, In The News

Chicago Customs and Border Protection intercepted a shipment of counterfeit coins from last week. After noticing an irregularity in the X-ray of a heavy package being sent to an residence, customs officials say they discovered 361 coins that appeared to be U.S. Trade Dollar coins with dates between 1873 and 1878. Analysis of the coins revealed that they were made of brass with a thin silver-plated coating.
. 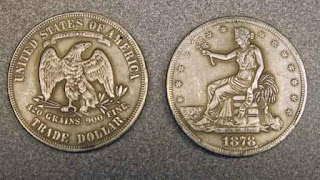 According to a news release from U.S. Customs and Border Protection, the original U.S. Trade Dollar coin was minted from 1873 to 1878. Customs officials say some of these coins can be sold for as much as $2,000.
According to officials, the recipient of the shipment was intending to sell the fake coins online.
"Legitimate traders are being duped into buying these coins believing they are genuine," said David Murphy, CBP Director of Field Operations in . "We strongly recommend buyers or any consumers to be aware and use caution when making these types of purchases on the Internet."
Customs officers screen international mail looking for any type of contraband, counterfeit or prohibited items being shipped to the .
Posted by The Man at 4/21/2011 1 comment: 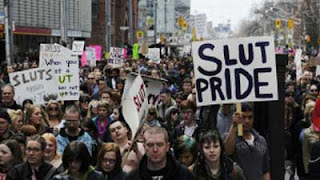 A son, wanting to protect his family's home, had a large sign made for his front yard. He says it's a promise, not a threat, to would-be burglars. 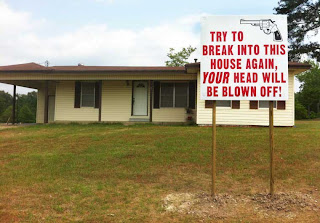 .
Steve Holland's 71 year-old mother, Claudia, had just turned off the TV around 11:30 p.m. when she heard a "whop" sound as someone kicked open her front door.
She says her three dogs, Jessie, Hank and Speedy went nuts, barking ferociously at the people on the other side of the door.
She called police, and she now has a new door and deadbolt.  However, that wasn't enough for her son.
"The idea that if she hadn't had those dogs to kind of scare them off... what could've happened," said Steve Holland.
Still, he wanted to do something else to keep the home safer.  He immediately called his friends at 's Adfab to make the large sign for the front yard.
"I just wanted to put out a big enough message not just to whoever broke-in, but the rest of the community," said Steve.
It was put on the lawn just a few days ago, and already the family has gotten so many calls laughing at the sign. Steve says it's not a joke; there are three guns in the home.
"You're lucky she dialed 9-1-1 instead of getting the gun out of her walker," said Steve.
He says whoever tries to break-in next won't be as fortunate.
.
Posted by The Man at 4/21/2011 No comments:

RI man's 1974 traffic violation dismissed
A man has finally settled a warrant issued for a traffic violation in nearly four decades ago.
Michael Young, of , asked a judge in Attleboro District Court on Tuesday to dismiss a driving to endanger charge issued in September 1974.
He was 23 at the time. The now 60-year-old told the court he found out about the warrant recently when he went to conduct business at the Rhode Island Registry of Motor Vehicles.
Judge Daniel O'Shea noted that half the people in court had not even been born at the time of the traffic violation. He granted Young's request, dismissing the case with payment of $100 in court costs.
Prosecutors agreed with the dismissal.
.
Robber's outfit same as in Facebook
The FBI says a man charged with robbing five Detroit-area banks was caught after investigators matched him to photos on Facebook.
Anthony Wilson was indicted Tuesday, two months after his arrest on a criminal complaint. He's accused of stealing $6,300 during five bank robberies from October through January.
FBI agent Juan Herrera says a tipster called after seeing bank surveillance photos. The tipster offered 's name, and the FBI found his profile photo on Facebook.
Herrera says there were Facebook photos of the 25-year-old wearing clothes that were worn during a robbery.
.

Woman sues police after no-underwear arrest
A trial under way in a woman is suing police who arrested her when she was not wearing underwear.
Sherri Sandau says two officers took her into custody at her home without letting her dress, and she says they wouldn't bring her clothes or a blanket.
The 47-year-old was wearing only a long tank top. She's seeking nearly $750,000 for post-traumatic stress in the federal court lawsuit.
Lawyers for the officers say they didn't initially know she was not wearing underwear because her top went to mid-thigh. They also say she was secure and out of sight in the patrol car.
Sandau was arrested in 2005 after confronting officers who responded to a complaint from a neighbor about a barking dog and other noise from Sandau's home.
.

Man exposed himself at McDonald's
A registered sex offender is accused of exposing himself in the parking lot of a Newark McDonald's and again inside the restaurant.
State police say a woman reported that a man exposed himself to her shortly before 8 p.m. Monday in the McDonald's parking lot. The woman told police that the man then walked inside the restaurant with his genitalia still exposed. She wrote down his license plate number as he drove away on his motorcycle.
Police ran the tag and viewed surveillance video that showed the man making a purchase while exposing himself. They identified the man as 43-year-old Joel Stevenson of and arrested him without incident at his home.
Already a Tier One registered sex offender, Stevenson is charged with lewdness and second-degree indecent exposure.
.

Girl brings mom's weed to school for show and tell
An 8-year-old student brought marijuana to school Tuesday prompting a Sheriff’s Office and Department of Children and Families investigation.
The girl took what was described as a small amount of marijuana from her jacket pocket and gave it to her teacher.
“This is some of my mom’s weed, it’s what my mother puts in blunts,” the girl told school officials.
.

No sex for dentists who treat spouses
Some Canadian dentists want changes to an provincial law that forbids them from having sex with their spouse if he or she is also their patient.
The "no sex with patients" decree is part of the 1993 Regulated Health Professions Act, which was crafted to address inappropriate relationships between psychiatrists and psychologists with their patients. However, dentists fall under the same rules.
Orthodontist Randy Lang wrote a tongue-in-cheek article for the Oral Health Journal suggesting how dentists could avoid prosecution.
"Have your spouse wear a disguise, like a moustache and beard, when she or he enters and exits your dental office," he wrote. "Also, at home, be sure to lock your bedroom door and cover all the windows with black paper."
In response to growing criticism from dentists, provincial Health Minister Deb Matthews said Monday she requested a review of the law by the Health Professions Regulatory Advisory Council, the Star said.
.
.

iPhone app works to block drunk texts
A woman said the iPhone app she created uses games to prevent people from sending drunken text messages they would later regret.
Samantha Deeter of Destin said she contacted an app development company with her idea and they made her a partner in the creation of the Textalyzer.
"This is to prevent people from doing the ultimate no-no," Deeter said. "I was briefly single and would run around from time to time bar hopping after work and would always tell people, 'I wish there was a Breathalyzer for phones.' That's when I got the idea."
Deeter said users of the app create "forbidden" lists of people likely to receive drunken text messages and their phone then forces them to play a series of four games to send the message.
Users who fail at the games are asked in 12 hours if they still want to send the message. Users can also program in reminders of why they might not want to text the intended recipients.
Deeter said an Android version of the app will likely be developed if the iPhone version, which was released Monday for 99 cents, proves successful.
.

As cops searched his home as part of a corruption of children probe, a man attempted to swallow a flash drive that he had dropped into a glass of water, according to police.
While police executed a search warrant Monday at his Bushkill home, Harold Moser, 46, told officers that he was “really thirsty” and asked for permission to get something to drink. Accompanied by a cop, Moser went into the kitchen and retrieved an orange glass, which he then began to fill with water.
At one point, a Bushkill Township Police Department officer looked over Moser’s shoulder and “noticed something in the bottom of the glass.” That is when Moser reached into the glass and tried to swallow the black and purple item. A struggle between Moser and the cop, that who grabbed Moser’s arm “to keep the item from being ingested.”
The suspect had to be “taken to the ground and Tasered,” police reported, because he “was actively fighting the police, still trying to eat the USB drive.” As a result, Moser was charged with tampering with evidence and resisting arrest. He was booked into the lockup, where he remains in custody in lieu of $15,000 bail.
The search warrant for Moser’s residence authorized investigators to seize computers, cameras, and any other items that can be used to take or store pictures. Moser was arrested two years ago for filming himself having sex with his girlfriend while his son watched from a nearby playpen. At the time, he was also reportedly being investigated for taking pornographic photos of a nine-year-old girl.
Posted by The Man at 4/21/2011 No comments: