Woman Reports Rape, Charged for having Sex outside of Marriage
A British woman who alleged that she was raped in Dubai on New Year’s Eve has had her passport confiscated and may face a jail sentence after she was charged with having sex outside marriage with her fiancé.
The 23-year-old woman, a Muslim from London, of Pakistani origin, said that she was attacked by a man who is understood to be a worker in the hotel where she had been drinking with her fiancé to celebrate their engagement during a three-day holiday in Dubai.
When she reported to the police that she had been raped, she and her partner, 44, were themselves jailed for sex outside marriage, which is illegal under the emirate’s laws. Unmarried couples are not allowed to share hotel rooms or live together, although many establishments turn a blind eye. The couple was also charged with being drunk outside licensed premises.
.
Man Breaks Into Jail
A Brevard County Florida judge has found a Cocoa man guilty of violating his probation by trying to break into the county jail.
Authorities say 25-year-old Sylvester Jiles, who was convicted Thursday, tried to climb a 12-foot fence at the Brevard County Detention Center in August. He was caught and hospitalized with severe cuts from the barbed wire. He had been released a week earlier after accepting a plea deal on a manslaughter charge.
Jiles had begged jail officials to take him back into custody because he feared retaliation from family members of his victim. The officials said they couldn't take him in and told him to file a police report.
Jiles faces 15 years in prison for trespassing and resisting an officer.
.
12-year-old Allegedly Robs Convenience Store with Toy Gun
A 12-year-old boy from Defuniak Springs, Florida has been arrested after allegedly pointing what turned out to be a toy gun at a convenience store clerk in northern Florida.
The Walton County Sheriff's Office says that the boy walked into the store Thursday. Authorities say the boy pointed a wood barreled, long gun at the clerk and demanded money from the cash register. After handing him an undisclosed amount of money, the clerk told deputies the boy said thank you and left.
A deputy on patrol saw the boy walking on a highway. The boy attempted to run before being stopped.
Authorities say they found the money and toy weapon. The boy was first transported to the Walton County Jail, and later transferred to the Department of Juvenile Justice in Crestview.
.
Posted by The Man at 1/09/2010 No comments:

The toddler had a broken leg and evidence of three previous breaks.
. 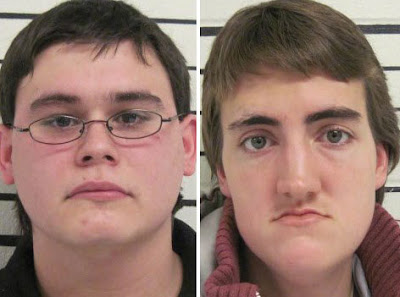 SUSPECTS
Henry Carey (left) and Amber Walker:
They were arrested after a reported "tug of war'
in which they pulled on their daughter while fighting..
.
Posted by The Man at 1/09/2010 1 comment: