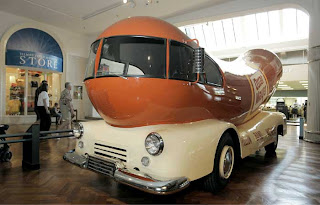 TUCSON, Ariz. (AP) - Arizona State Police thought they had a hot one on Interstate 10 - that Oscar Meyer Weinermobile cruising through Tucson. Instead, they ended up with some - er - mustard on their face.

The famed Weinermobile, which travels across the nation promoting Kraft Foods' Oscar Meyer brand, was spotted by a state Department of Public Safety officer Wednesday morning on I-10, said officer Carmen Figueroa, a DPS spokeswoman.

The officer, in an unmarked car, ran a computer check and the license plate came back as stolen.

On came the lights, and the dog was nabbed. Other officers headed for the scene as backup.

But after some checks with the Columbia Police Department in Wisconsin, which had registered the warning on the "YUMMY" plate on the traveling ad, the officers backed off.

Wisconsin police had intended to make a note on the computer log that the plate only belonged on the traveling hot dog and that it was stolen if on any other vehicle, Figueroa said. Somehow the distinction didn't translate well, and the state DPS is now changing the computer entry.