Not once but twice this man was blessed with miracles

He survived against all the odds; now Peng Shulin has astounded doctors by learning to walk again. When his body was cut in two by a truck in 1995, it was little short of a medical miracle that he lived. It took a team of more than 20 doctors to save his life. 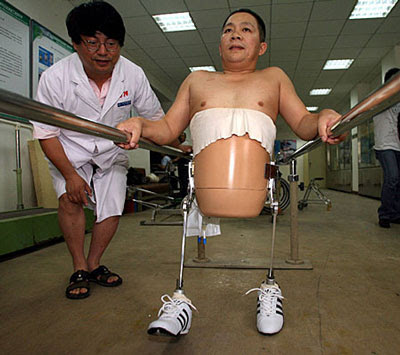 Skin was grafted from his head to seal his torso – but the legless Mr Peng was left only 78cm (2ft 6in) tall. Bedridden for years, doctors in China had little hope that he would ever be able to live anything like a normal life again. But recently, he began exercising his arms, building up the strength to carry out everyday chores such as washing his face and brushing his teeth. 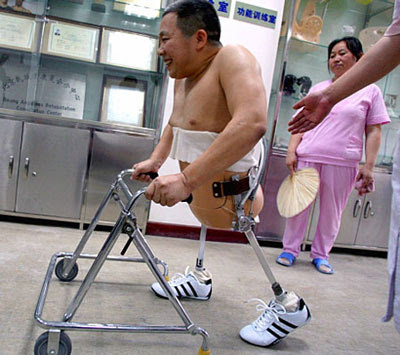 Doctors at the China Rehabilitation Research Center in Beijing found out about Mr Peng's plight late last year and devised a plan to get him up walking again. They came up with an ingenious way to allow him to walk on his own, creating a sophisticated egg cup-like casing to hold his body with two bionic legs attached to it. He has been taking his first steps around the center with the aid of his specially adapted legs and a resized walking frame.

Labels: In The News, Interesting, Using Your Brain