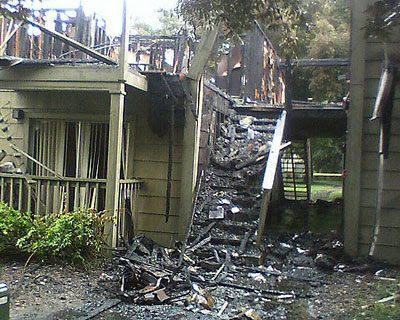 Man smoking while on oxygen may have caused fire
A fast-moving fire in Orlando, Florida that may have been caused by a man smoking while using oxygen left 27 people homeless Saturday and damaged or destroyed at least a dozen apartments, authorities said.
Residents said there was a loud explosion about 7:15 a.m. and then flames began shooting through the roof of 2338 S. Conway Road in The Grove apartments, south of Curry Ford Road.
"It sounded like boom, like a bomb," said Julio Saez, 9, who was awakened by the noise.
The man who lived in the apartment where the two-alarm fire started, Kevin McMahon, 55, was in critical condition Saturday at Orlando Regional Medical Center. Authorities said he suffered from smoke inhalation and burns to the face, arms and hands.
Orlando police Lt. Laura Houston said the oxygen tank apparently sparked the fire. A neighbor and a friend of McMahon said he has emphysema and other ailments and uses oxygen to breathe better.
Posted by The Man at 9/03/2007