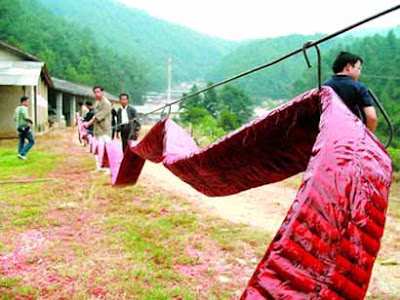 A Chinese city is hoping to get into the record books by letting off a twelve-and-a-half mile string of firecrackers.
A total of 35 fireworks factories in Liuyang city, Hunan province, have worked together to create the firecrackers.
Zeng Mengxiong, the chief technician of the project, told the Changsha Evening News: "We are doing this to celebrate the upcoming Liuyang International Firecracker Festival."
Zeng estimates it will take 85 to 90 minutes for all of the firecrackers to explode: "At the beginning and end, the firing speed should be slow, in the middle, really fast," he added.
The firecrackers will be let off on the opening day of the festival, October 26, when onlookers will be kept back a safe distance.
"We have set up a 10 meter-wide quarantine zone on either side of the string, and will have more than 3,000 guards," a government spokesman said.
"We aren't worried about rain, since the firecrackers are water-proof."
The government says it is applying to have officials from the Guinness Book of Records present on the day of the event.
Posted by The Man at 10/17/2007