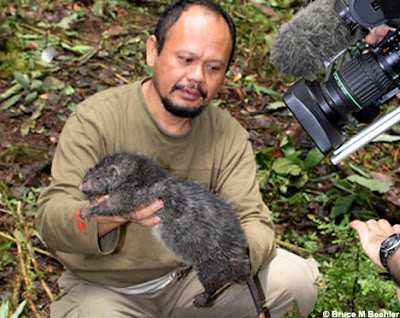 Giant rats, each as large as a cat, have been discovered in a 'lost world' of exotic animals and plants that scientists liken to the Garden of Eden.
The monster rodents dwarf another newly–found creature - a pygmy possum - now being documented as one of the world's smallest creatures that carry their young in a pouch.
“These are two animals that were totally unknown to science and we're absolutely thrilled to have discovered them,” said one of the explorers who ventured into the thick jungles of Indonesia's Papua.

It actually looks kinda cute. I hope he's not going to eat it.

You won't be saying that if you were the one holding it.

Ah yes, now I think about it, it has rabies and smells of rat piss.