Who needs credit cards when you have a vagina?

There's nothing quite like telling adolescent girls that they don't need to worry about finances since they have their very own money pot between their legs. 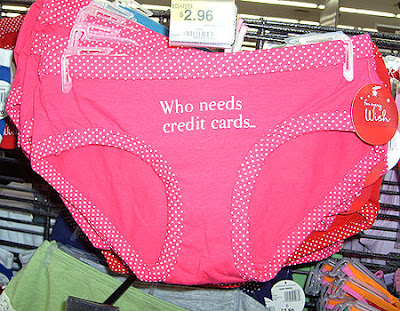 .
Wal-Mart Remove Pink 'Credit Card' Panties Off Racks
Suggestive pink Santa panties targeting young girls are being removed from Wal-Mart stores after parents objected to the offensive undergarments.
The panties, which were sold in the juniors department, seemed to suggest that girls don't need money; they just need a sugar daddy — in this case Santa Claus.
The hipster briefs — carrying the slogan "Who needs credit cards ..." on the front and "When you have Santa" on the derriere — caused an uproar among parents, who called for the $2.96 panties to be pulled off the racks.
"We have directed our stores to remove this merchandise from our shelves," Linda Brown Blakely, a spokeswoman for Wal-Mart, told FOXNews.com Wednesday.
The undergarments had caused a stir on some blogs prior to Wednesday's announcement. Scarlett, a reader of Feministing.com, alerted the blog to the holiday-inspired undies, which she found on a rack in the juniors department of a Wal-Mart in Cary, N.C.
Click here to read Feministing.com's post.
Posted by The Man at 12/13/2007

Labels: In The News, Not Right, Pictures

I wonder if they were made in China like every other bad stuff comes from?