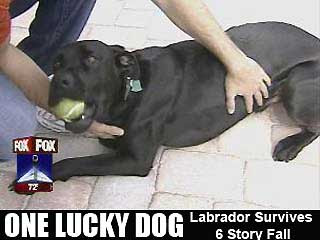 TAMPA, Fla. — Authorities say a Labrador retriever named Jet really can fly. The 65-pound dog survived a six story leap from a Tampa airport parking garage and lived.
Police and Jet's owners and vet say the 2-year old dog accidentally leaped over a parking garage railing on New Year's Eve and walked away from the landing -- 60 to 80 feet below.
Jet spent the night at a vet's office with a collapsed lung and some cuts and bruises. But by the next day, the dog was getting antsy again.
His owners are Clayton and Jessica Tieman of Largo. They named Jet for the sheen of his black fur, not for any flying abilities. They say their next dog will get a more earthly name, perhaps Scooter.
Posted by The Man at 2/09/2008