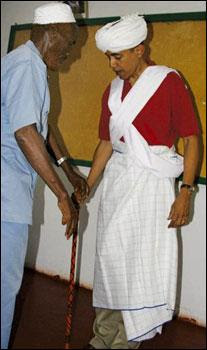 February 26, 2008 WASHINGTON (AP) --- A photograph circulating in the Internet of Democratic Sen. Barack Obama dressed in traditional local garments during a visit to Kenya in 2006 is causing a dustup in the presidential campaign over what constitutes a smear.
The Associated Press photograph portrays Obama wearing a white turban and a wraparound white robe presented to him by elders in Wajir, in northeastern Kenya. Obama's estranged late father was Kenyan and Obama visited the country in 2006, attracting thousands of well-wishers.
The gossip and news Web site The Drudge Report posted the photograph Monday and said it was being circulated by "Clinton staffers" and quoted an e-mail from an unidentified campaign aide. Drudge did not include proof of the e-mail in the report.
"I have not previously seen this photograph," Clinton spokesman Howard Wolfson said Monday. "I'm certainly not aware that anyone in this campaign has anything to do with it."