Snacking in the Future

The Col-Pop, an All-in-One Chicken Nugget and Soda Cup 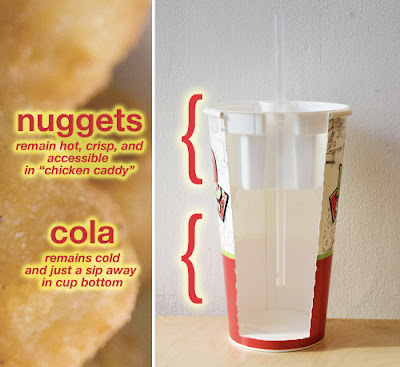 The Col-Pop: emerging technology from South Korean fried chicken chain BBQ Chicken. Popcorn chicken rides up top; cola chills out below.
Proving yet again that South Korea is light years ahead of everyone else in fast-food technology is The Col-Pop. The nation that brought the world the spiral-cut potato on a stick and hot-dog-stuffed pizza ushers in a new era of snack portability with this mashup of drink cup and food container that holds popcorn chicken up top and a cold drink in the bottom. 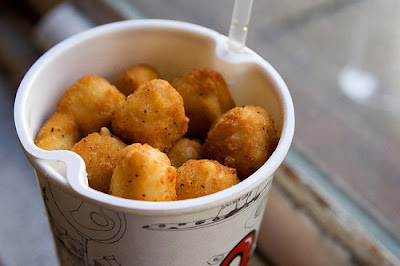 The Col-Pop is the brainchild of BBQ Chicken, a South Korea–based fried chicken chain that has recently set its sights on worldwide chicken domination (though at this time, it only has locations in New York, New Jersey, and North Carolina). From the looks of this container, on-the-go America will certainly eat it up. It's perfect for handy snacking while walking, driving, talking on the phone, or—as we discovered the other day—blogging.
And the genius doesn't stop at popcorn chicken. In South Korea, sister company BHC Chicken also offers spaghetti, french fries, and fried mozzarella balls in Col-Pop containers. The Col-Pops we inspected come in two sizes: small (20 ounce cup) and large (32 ounce).