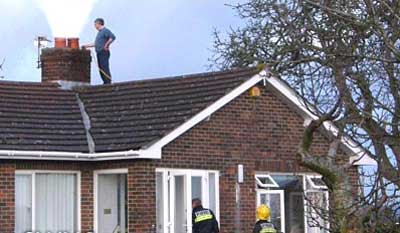 Stuff the fire brigade; I'm going to put it out myself .

When Trevor Scott found his chimney on fire he went flaming mad - and climbed up to put it out himself. He had raced home after a panicky call from wife Sheila. And he was still extinguishing the flames with a garden hose when a fire crew arrived. Trevor, 56, said: "It was instinct really. I couldn't see any point in waiting while things got worse." Sheila, 53, had lit a log fire in Huntspill, Somerset, on Monday when soot set the chimney ablaze. She dialed 999, then Trevor. She said: "He seemed annoyed and just jumped on the roof without thinking.
The firemen found it quite amusing."
The brigade said: "We'll have to think about signing him up."
.
.
GOOD THING HE DID BECAUSE THE FIREMEN IS JUST STANDING AROUND
Posted by The Man at 3/11/2008