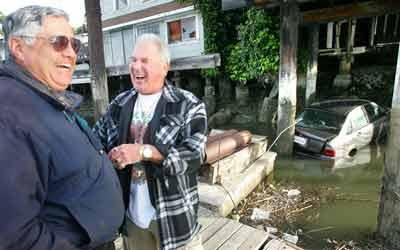 OAKLAND, Calif. -- A woman swam to safety early Thursday after her car careened off a roadway and splashed into the Oakland-Alameda Estuary, floating to rest underneath a home built on stilts above the waterway.

Authorities said the car went into the water a little after 6:00 a.m. after its driver lost control when she reached for her cell phone near the intersection of Alameda Avenue and Fruitvale.

The 22-year-old female driver, on her way to work at a nearby Brinks office, was able to knock out a window, climb out of the floating vehicle and swim to safety. Onlookers said she came ashore still cradling her coffee cup.

The name of the driver has not been released.