CSI Star Accused of Having Drugs 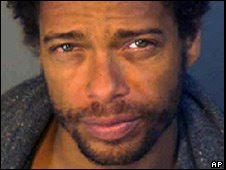 Actor Gary Dourdan, who stars in TV show CSI: Crime Scene Investigation, has been arrested on suspicion of drug possession, police have said.
The 41-year-old was held after being found asleep in a parked car in Palm Springs, California.
Police allegedly found substances believed to be cocaine, heroin and ecstasy in the vehicle.
The car had been parked on the wrong side of the street with its inside light left on, according to a police press release.
This said Dourdan appeared to be disoriented and "possibly under the influence of alcohol and/or drugs" when approached by an officer.
Posted by The Man at 4/30/2008