A activist who bikes through town wearing only pasties and a G-string has some fans, but she may face prosecution for public indecency. 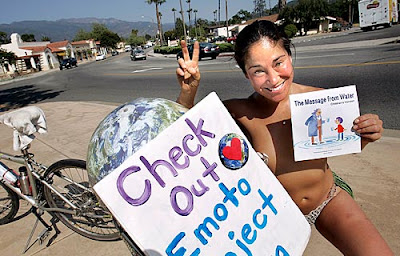 Jennifer Moss, 32, known in Ojai as "Pastie Lady" or "Earth Friend Jen," rides around town in pasties and a G-string made of hemp to support natural-fiber clothing and the healing powers of water. In the year since she began pedaling in her scant attire, Moss has been arrested and ticketed.
Cars were whizzing past one of Ojai's busiest corners when Jennifer Moss decided to do a headstand, clad in only a G-string and flower-shaped pasties.
Why?" Headstands are good for you!" she said, beaming, as she pulled a yellow smiley-face pillow out of her bicycle's small trailer. With athletic grace, Ojai's "Pastie Lady," a self-described social artist and environmental activist, quickly pulled her legs up to salute her adopted hometown.
Posted by The Man at 4/28/2008

Labels: In The News, NSFW