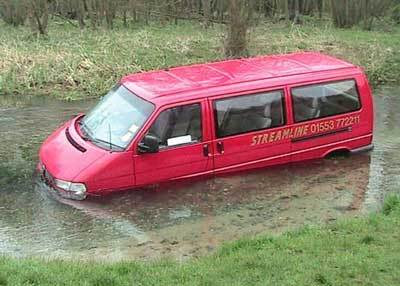 A mini-bus owned by a taxi firm called Streamline was left stranded after a satellite navigation system guided it into a river.
The driver was on his way to collect a fare in Castle Acre, near King's Lynn, Norfolk, on Saturday night when he took a wrong turn into the River Nar.
A spokeswoman for the King's Lynn-based business said: 'The driver told us he was following his sat nav and, when it told him to carry straight on, he did, even though it was taking him along the river.'
The vehicle was removed on Sunday and is being examined by mechanics.