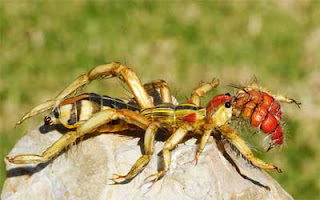 Afghan spider forces Army family out of home
The family of a British paratrooper has moved out of their home after a dangerous spider hitched a lift back from Afghanistan with him.
Days after Rodney Griffiths returned home from a four-month tour of Helmand province with 16 Air Assault Brigade, the family's pet dog Bella mysteriously died.
Son Ricky, 16, then spotted the giant spider, prompting the soldier's wife Lorraine to move the family out of their four-bedroom army home in Colchester, Essex.
Mother-of-four Mrs Griffiths, 37, said: "Ricky saw a huge spider and screamed to his sister Cassie. They tried to put a pint-glass over it but it was too big, they poked it with a coat hanger and the spider bit it. The dog came in, jumped on the bed and barked at it. The spider hissed and Bella went running out whimpering."
Days later the family took Bella to the vet with a high temperature and swollen stomach. She had to be put down. Mrs Griffiths said she thought her death "too much of a coincidence" although the vet could not say why the dog died.
After scouring the internet for spider descriptions they decided the culprit was a camel spider.
PICTURE and More