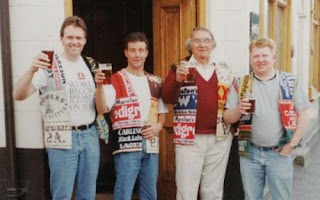 A dedicated team of pub goers have drunk themselves into the record books by carrying out the longest ever pub crawl.
The four men have just visited their 14,000th pub across the United Kingdom and Republic of Ireland.
They have spent 24 years traveling to every corner of the country and have downed and estimated 84,000 pints of real ale, working out at 21,000 pints each.
The foursome - Peter Hill, 52, John Drew, 45, Karl Bradley, 45, and Joe Hill, 77, began their mission in 1984. Because three of them work, their pub going is confined to Sundays and holidays.
Yet despite their travels, the cheapest pint they have found is only a mile down the road from where they live and costs 89p.
More Pictures and More
.
Looks like they had too much drinking time on their hands.
.
Beer Goggles said...
That's dedication for you. Something only some of us aspire to.
Posted by The Man at 10/31/2008