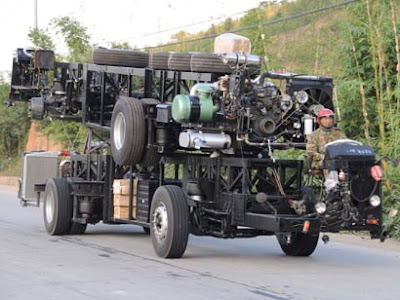 Traffic police in China pulled over a man who was driving the chassis down a motorway.
The chassis had no driver's cab, bodywork or even lights - and to make matters worse it was carrying another chassis on top of the first.
The driver, whose name was not revealed, was arrested and fined for driving a dangerous vehicle,
Police also seized the vehicle following the incident which happened on a stretch of motorway near Nanping.
A police spokesman said: "It had been driven all the way from Jiangxi province."
Posted by The Man at 10/24/2008